From The Future of Urban Farming
September 8, 2017

Global data collection and the future of indoor urban farming 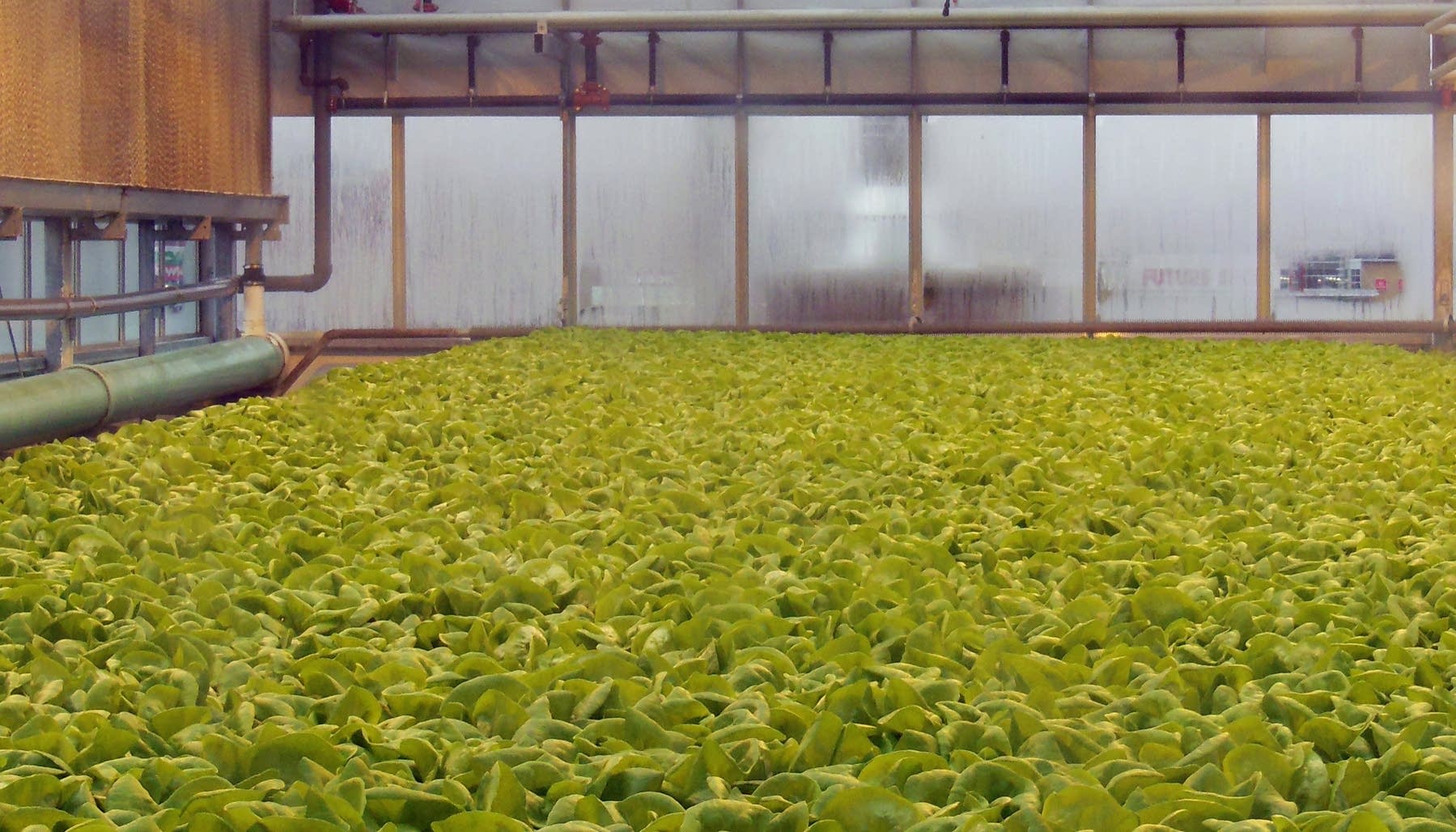 The urban farming movement takes many forms, both indoors and outdoors: school gardens, community vegetable patches, fish farms in tanks. Scientist Caleb Harper believes that indoor urban farming specifically can create the best tasting, most nutritious, and least energy intensive crops anywhere in the world. Harper is director of the Open Agriculture Initiative (OpenAg) at the Massachusetts Institute of Technology (MIT) Media Lab. He and a global collection of “nerd farmers” are working on a Food Computer, which closely detects – and allows you to adjust – the growing conditions of any plant in the room. Francis Lam talks with Harper about the project.

Francis Lam: There are so many things that make a great farm great. You start with the farmers, of course. But then the kind of sunlight it gets, the soil composition, the temperature, all sorts of factors. You’re trying to bring those characteristics to growing plants – indoors.

Caleb Harper: Exactly. If someone says the best tomato in the world comes from Tuscany on the north side of the slope with the happy cow next door, we try to factor in all of the biotic or abiotic stress – most people would call it climate – that caused those specific genetics to create the flavor that they liked. We try to figure that out and, in the process, use the least amount of resources – less water, energy, and nutrition loss from transportation – so that we can make a good product that's healthy and available in our cities.

FL: I assume that means you also pipe in audio of a happy cow mooing just to make sure that's covered?

CH: A lot of my freshmen that come into my lab at MIT, the first thing they want to do is put the plants through Mozart and then put the plants through Tupac. And you know who wins between Mozart and Tupac? Tupac! Because it's all about microvibrations, which in the natural world you'd call wind. You need wind inside of these environments because the plant gets stressed by the wind and starts to grow taller, so it's morphologically correct. Those microvibrations of Tupac really help it out.

CH: That's a bleeding edge of science. We've never before had the ability to gather or process so much data so cheaply. Now, with advancements in robotics, sensors technology, and data processing, we can start to get at some basic science that we haven’t been able to do before.

FL: It’s almost like you're creating a virtual reality for these plants that is, in fact, reality.

CH:  That's totally true. One of the things that limits agriculture and agricultural science is seasons. We go season-to-season, we try and make changes, we select for genetics that did well in that season. But we have a lot of asynchronistic or non-categorized variables during that season. Imagine you could run the season ten thousand times. If you could run the season ten thousand times, you could try all different kinds of things that you would have done, and see which one worked out the best without having to wait ten thousand years. The idea is, how can we make agriculture and plant science more like computing?

FL: How are we going to get to the point where this happens on every other block in every other city? How will this scale up?

CH: Right now, it’s bubbling in the entrepreneurial realm. There are a lot of start-ups – shipping container size or warehouse size – in Japan, China, Europe, and the United States, with hundreds of millions of dollars going into this. But what I think needs to happen, and what my group is trying to be a part of, is the sharing of this knowledge so it can scale up.

There are so many unanswered questions. We need trillions of data points. We need one hundred thousand images to do any machine learning. We've taken all of our plans, software and hardware, and made it open source. You can access it for free; you can use it for whatever you want and you contribute as part of the project. It’s kind of like a citizen science for horticulture or botany. After the last year and a half, there are people in 40 countries around the world contributing to our project. They are contributing code. They are growing in the bots whatever they want to grow, whatever excites them. We are able to collect data on that, and it starts to build up this data set that we can use.

This is the way of the future. You look at Tesla open sourcing their patents so that more infrastructure can be built; it’s part of that network economy. Apple open sourcing their app developer language; this is because of our networked world. There's never been a time in human history where you can get more people working on a single problem – if you share that infrastructure. I don't think anything is more important than how we are going to feed all the people in the world with the least amount of resources and the highest amount of flavor and nutrition.

FL: This sounds incredible. Good luck to you, and I think that means good luck to all of us.

CH: Absolutely. There's a nerd farmer inside all of us. A lot of us think we don't have a green thumb. But what if a green thumb was a digital asset? What if I could download a farmer's eye that took 60 years to cultivate? That beautiful eye that can tell you what's wrong with a plant. You might come into this saying, “My houseplants are always dying; I don't know what to do with them.” What if we could make that a program? What if you literally downloaded a tomato, and that tomato meant that you put a seed in an environment that was then created by a master gardener or a master horticulturalist, or by a chef that knew what to do with this plant in the northern part of Spain to get the most beautiful expression of flavor – but we captured that as a recipe? You downloaded it, you grew it, and all the sudden, you're in the Basque region in your apartment.

FL: What other technologies do you see right now in terms of farming and agriculture that we laypeople don’t know about?

CH: In a bigger context, what I’m seeing is a general shift that’s a coming together of biologic and digital technologies. For example, rapid sequencing – the ability to get to the genetics of whatever we’re interested in very quickly. And now, the ability to edit those genetics. There is something called CRISPR (Clustered Regulatory Interspaced Short Palindromic Repeats); it’s a system that makes it easy and cheap to edit something within a genome. This might be something that people are concerned about. But when you think about the fact that everything we’ve eaten in our entire life has been genetically modified because it’s been trait selected for hundreds of years down to become the corn that we eat today –

CH: Exactly. Or a bigger version of whatever we were looking for. What CRISPR is, is the ability to do what used to take many years outside, one day to do in a lab. That can radically change what we’re able to do with agriculture in the short term.

There are some amazing things going on in the microbiome. I don’t know if you’re following the conversation about human microbiome, but in the plant world, we’re saying “root microbiome.” We look at what should be in the soil. Maybe it isn’t there because the method of farming that we’ve been using hasn’t cultivated that microbiome. Maybe it was never there in the first place, for whatever reason. What microbes and bacteria would we want to put back into the soil that would cause a better plant to come out? What’s even more radical than that, is people are starting to engineer microbes. If you know the process you are trying to help, you can literally engineer a helper microbe to go into the soil to cause a more efficient plant.

Things like microsatellites and drones are getting a lot more data on our fields. There is a start-up that has recently created more data about infield farming in the last five years than the USDA has in its entire existence. Part of that is the cheaper sensors and cheaper processing power.  We’re getting a very described field, the ability to modify very quickly within genome, trait select using CRISPR, and we’re looking at how we would intentionally the soil with microbes.

Francis Lam is the host of The Splendid Table. He is the former Eat columnist for The New York Times Magazine and is Editor-at-Large at Clarkson Potter. He graduated first in his class at the Culinary Institute of America and has written for numerous publications. Lam lives with his family in New York City.
Classic English Muffins
Soul-Hugging Lentil Shepherd's Pie
Pancit Molo
Store-bought Chicken Stock Staff Tasting