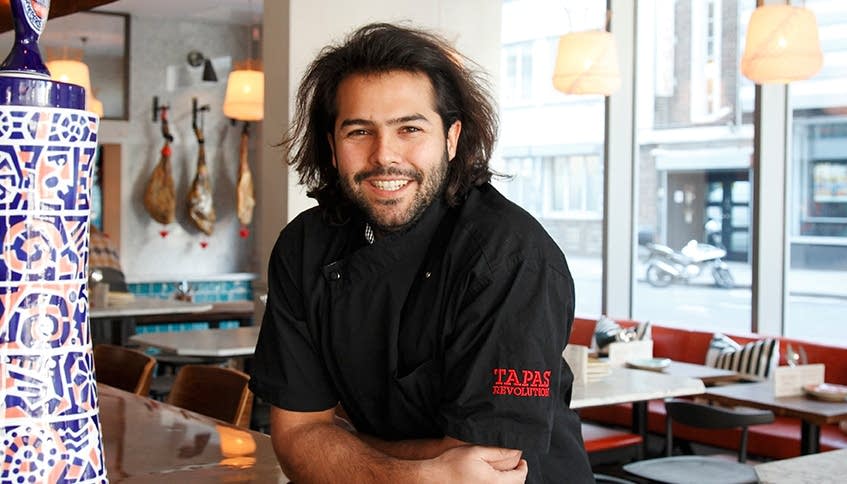 Spain is the birthplace of some of the most delicious, interesting sauces on earth: rusty red purees of peppers, fried bread and almonds; thick dips that you want slathered over grilled meats; and, of course, the king of all sauces: mayonnaise. For a tour of Spain’s staple sauces, Sally Swift, Managing Producer, sat down with Spanish chef Omar Allibhoy, author of Spanish Made Simple. Omar also shared his recipe for Slow Cooked Pork Belly with Mojo Dulce.

Still hungry for more? Sally also asked Omar about what home cooks need to know in order to make an amazing Spanish paella. See this bonus page for Omar’s advice and recipe for Seafood Paella, plus a kitchen demontration video on the process.

Sally Swift: When I was starting to cook, I was lucky enough to stumble upon a recipe for Romesco sauce. I am telling you, that sauce changed my life as a cook. You Spaniards know what you're doing!

Omar Allibhoy: It's one of the favorites, and very commonly used, particularly on the east coast of Spain. It has a mix of fried bread, toasted, fried nuts – pine nuts, hazelnuts, or generally almonds – roast vegetables and tomato, and some spices. Blend it all together, sort of coarse – not in a smooth, thin puree – and it can be enjoyed with fish, meat, and vegetables. When spring onions are in season in Spain in February, we have a particular spring onion in Catalonia, the calçot, which is a succulent, sweet spring onion. We charcoal them over the open fire on the barbecue, then peel off the burnt skin outside. We dip those in the sauce. We also have a major festival called the Calçotada. Most of the sauce is consumed on that particular day of the year.

SS: As a young cook, one thing that was surprising to me about that sauce was the big hit of vinegar in it.

OA: Yes, sherry vinegar. Very strong and acidic because it's generally quite old vinegar. We mature it in wood barrels, particularly with the leftovers of the sherry wine that we do in the south of Spain. It gives incredible intensity to the sauce. The sauce itself is a bit split. It’s not fully emulsified in any way; it has the coarse bits of the bread and almonds.

SS: It's a chunky, thick sauce. Can you give me a couple more Spanish sauces – what I consider to be mother sauces – that Spaniards put to use all the time?

OA: One of the historic sauces will be espangnole, which translates as “Spanish sauce.” Most people consider it to be French, like most mother sauces because it was spread by Auguste Escoffier. It's like a demi-glace or thick gravy of the reduction of the stock made with beef bones and roasted vegetables. It is a common sauce in Spain. It was written about in the 18th and 19th century. That's where Escoffier got it from, and why he called it sauce espagnole. We use it in all sorts of stews or with pork cheeks. That is the mother sauce, as you said. Then there are obviously plenty of variations. You can add chocolate to it, blend caramel into it, or emulsify it with butter. It all depends on the purpose and the use.

SS: Can you explain to me what a mojo is? Is that an important sauce in Spain?

OA: Yes. Mojo comes from the Canary Islands, which is more physically and geographically on Africa than it is actually in Spain. There is a couple of them: mojo picón, which translates as “spicy mojo,” and mojo verde – green mojo. They are both similar to Romesco sauce in its essence; they have extra virgin olive oil and vinegar as the base of the sauce. But the mojo picón is done with dried red chilies, fried bread, cumin seeds, and some other things. The mojo verde is done with fresh green chilies and coriander. Coriander, of course, being an herb that is common for all of us, but it originated in the Canary Islands. Those two sauces are distinctive, pungent, and quite acidic. Mojo verde is normally used with fish, and mojo picón more with meat.

They we have this very particular recipe in the Canary Islands, which I thought the world should know about – wrinkly potatoes. Let me explain to you the reason why the potatoes are wrinkled. They are smaller potatoes, like new potatoes. We only just cover them with water – like about two fingers – and then you let them boil. That water will dehydrate in about 20 minutes, which is about the time that the new potato takes to cook. Use plenty of salt in the water. When the water totally dehydrates from the pot, you stir the potatoes. Everything that is left is the salt, which creates a bit of a crust around it. As the potatoes cool down, they wrinkle completely. That is a great and healthy way of eating potatoes, so try it at home.

SS: That sounds excellent. Would you serve that with the mojo?

OA: Both mojos, actually. You put them both out and dip whichever way you want.

SS: So, those sauces that involve nuts – is that what a picada is?

OA: Yes, it is. I was saying that Romesco sauce comes from Catalonia, which is in the northeast of Spain, bordering with France. Just below that region, it's Valencia and Murcia. Just on the right of it, we have the Balearic Islands: Ibiza, Mallorca. People are probably familiar with Mallorca, where we've historically grown almonds, which the Arabs brought from North Africa. After the US, Spain is now the second largest almond producer in the world. We have plenty of sauces done with almonds, which we generally call picadas. They are either a dressing that you can use to your liking with salads or a topping for a variety of recipes. We also use it to thicken sauces. A great example of that is suquet, which is a fisherman type of stew with plenty of saffron. What we do with the picada, in that case, is take saffron, fried bread, toasted almonds, a bit of paprika, and olive oil, and, using a mortar and pestle, grind it into a paste. Then you add it to your fish stew; it gives a fantastic taste and thickens the sauce.

SS: That's what's so interesting about the Spanish take on sauces – they’re so often thickened.

OA: Yes. In the UK, their staple food is potatoes; in Asia, it is rice. In Spain, our staple food is bread. Bread is our daily thing, like in France. We mop every sauce with bread. We use bread, as well, to thicken a lot of sauces. We also use almonds and egg yolks. Funny enough, that was the oldest thickening agent. We would boil the eggs, take the egg yolk and dilute it in water. When you bring that to the boil, whatever stew you are doing, then it will thicken.

OA: Talking about egg yolk, I think it's worth mentioning mayonnaise.

SS: I was wondering if you were going to get there. Spaniards love mayonnaise, there’s no doubt about it. It's everywhere.

OA: Yes, we do, but we do it well. This is a story that probably not many people know. Mayonnaise originated in Spain – in the Balearic Islands – in the city of Mahón, on the island of Menorca. It was the French who, when they discovered it, went back to France and said, “This is the sauce of Mahón,” which is the mayonnaise. It was from there.

OA: No, they were just clever enough to use it, and we all know the rest of the story. It's a delicious sauce that the world loves, but it was originated in the Balearic Islands in Spain.

SS: That is so interesting. Well, if I may officially say, "thank you for mayonnaise."

OA: I thank whomever did it, as well.

Sally Swift is the managing producer and co-creator of The Splendid Table. Before developing the show, she worked in film, video and television, including stints at Twin Cities Public Television, Paisley Park, and Comic Relief with Billy Crystal. She also survived a stint as segment producer on The Jenny Jones Show.
Cucumber Tahini Gazpacho with Crispy Spiced Chickpeas
Summer Squash Escabéche with Mushrooms, Arugula, and Steak
Salmon Cakes with Chimichurri
Sticky Korean Beef