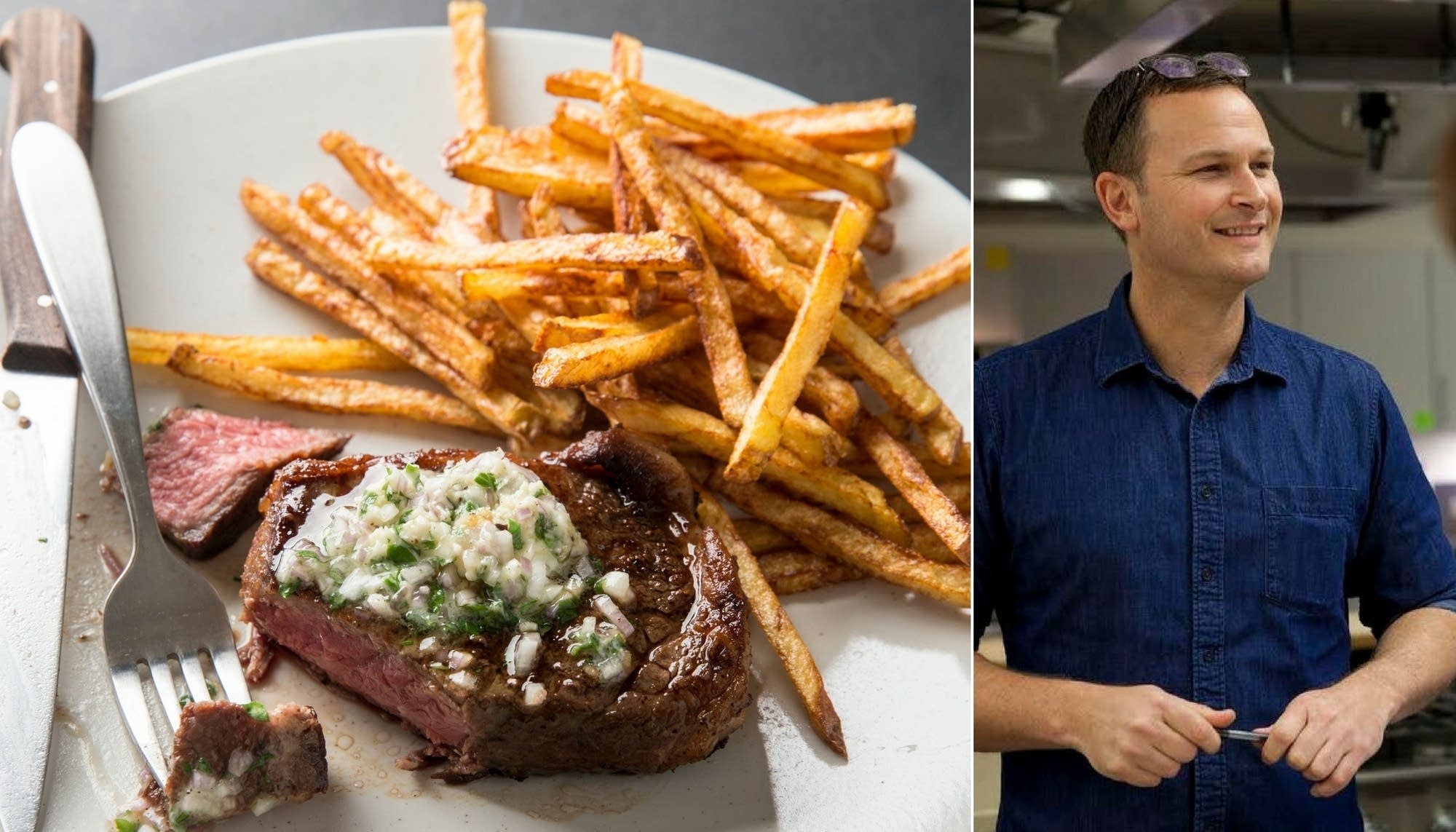 On paper, steak frites seem so simple. As its French name implies, it is just steak and fries. But, to get the two components cooked right and served hot – at the exact same moment – is a feat in itself. Thankfully, our friends at America’s Test Kitchen have fine-tuned the timeline for making the dish in your home kitchen. Tucker Shaw is executive editor of Cook’s Country magazine. Managing producer Sally Swift discussed the process with him, and got his recipe for Easy Steak Frites.

Sally Swift: I love it when you guys take something that we normally only eat in a restaurant and teach us how to do it at home. I want to take on a classic dish: steak frites; the classic bistro dish is absolutely delicious. What do we need to know to make that at home?

Tucker Shaw: You’re right. Not many people make this dish at home. I think it’s because of the timing; it’s tricky to get everything to table hot, especially the fries. And there is no bigger crime than cold fries. At a restaurant, they have the significant advantage of having two cooks, one on the meat station, and one on the fry station. But at home, it’s just you.

SS: How did you solve this?

TS: We have a french fry technique that we love; it starts with cold oil.

SS: That seems crazy to me!

TS: It is crazy. It goes against everything you think you need to do for deep frying. But it is the thing that opens the door for a home cook to achieve this quite easily.

SS: Talk me through it.

TS: You’re going to line a sheet pan with three layers of paper towel. You will use this later to dry the fries once they’re done cooking, but do it ahead of time so it’s ready when you need it. Next, you’re going to prep your potatoes. For four people, we call for about two-and-a-half pounds of Yukon Gold potatoes, cut into quarter-inch fries. You want to look for a slightly bigger Yukon Gold, not the little baby-sized ones; you don’t want mini fries. We choose Yukons for flavor, but they’re also less likely to fall apart in the frying process. Cut the potatoes, put them into a cold Dutch oven, and cover them with about six cups of peanut oil.

SS: Oh, come on, that’s against all the rules!

TS: The reason we use peanut oil is it has a neutral flavor and the ability to withstand high heat better than some oils. Cover the potatoes with oil, put the Dutch oven onto the burner, turn it on to high, and stand back. In about five minutes, the oil will start to bubble. Don’t touch it. Instead, set a timer for 15 more minutes. Then, rather than obsessing about the fries, let them be, and turn your attention to your steaks.

In restaurants, you’ll often find steak frites made with hanger steaks – sometimes called onglet. But we chose strip steaks for a couple of reasons. One, they’re more available and easy to get. Two, it’s easier to cook four portions in one skillet. You take two one-pound steaks, cut them in half, right down the middle, and there will be plenty for four people. Pat your steaks dry, and sprinkle them with salt and pepper. The reason you pat them dry is you want to achieve a nice crust on the exterior of your steaks. You’ll heat up a slosh of oil in a skillet, put it over high heat until it shimmers, and add the steaks to the skillet. Cook about four-to-seven minutes on each side.

SS: Those french fries are still in the background, right?

TS: They are still going for it back there, and they are doing great. No need to sweat it. Once your steaks are cooked – this will take about 8-12 minutes or so – they will be at about 125 degrees. Pull them from the heat at that point, and set them aside. They will carryover cook to bring them up to about 130 degrees which is our target for medium-rare.

SS: Always hard to trust that.

TS: Use a thermometer if that makes you feel more comfortable. At this point, that timer you set about 15 minutes ago is about to go off. When it does, grab a pair of tongs and give your fries just the gentlest stir in the bubbling oil. Don’t make it scary, don’t move them around so much that they threaten to splash. They still have about seven more minutes to go after you’ve stirred. At this point, you’ve got to plate your steaks and call the people to the table. You put your eyes back on those fries; when they are gorgeously golden-brown and you can’t stand it anymore, you grab a slotted spoon or a spider, and move the fries to the paper towel-lined sheet. Hit them immediately with salt, and bring them to the table. I generally drop the sheet pan in the middle of the table so everybody can grab straight for it. You will find a mound of french fries that have beautiful, crisp golden brown exterior and lovely, creamy insides. And I’m telling you, people will go bananas.

SS: This is revolutionary.

TS: And so simple. I’m telling you, if you do this, you will cross a threshold of belief in your ability to deep fry.