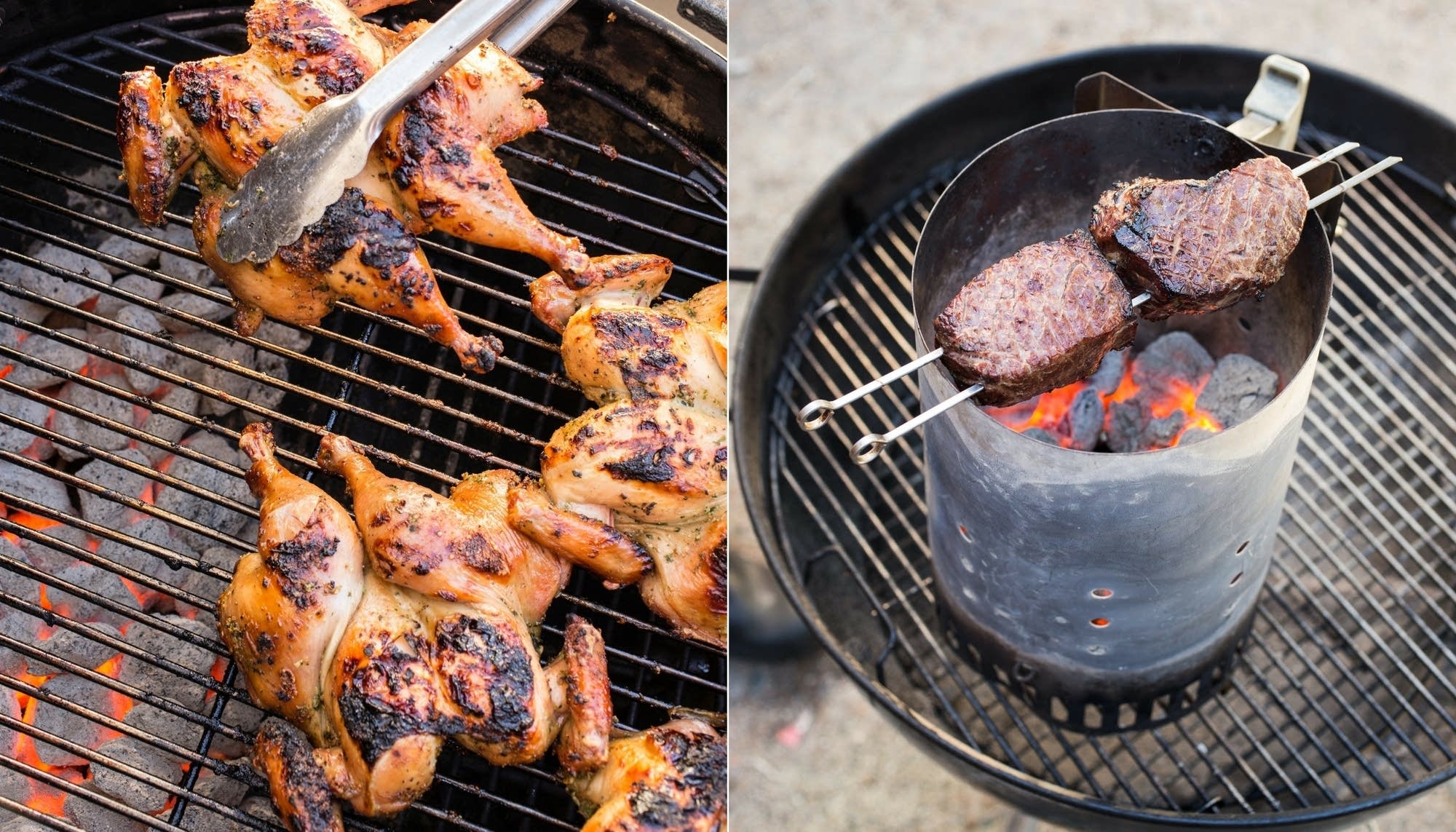 A charcoal grill can cook almost anything you can think of – meat, vegetables, seafood, even dessert. John "Doc" Willoughby knows all about it. He has written dozens of books and articles on the topic of grilling. Willoughby also recently retired as the editorial director of America’s Test Kitchen’s magazines. We were lucky enough to catch him before he left. He spoke with host Francis Lam about charcoal grilling techniques including one unique method for quick and extremely hot grilling, as well as a new setup to emulate the slow-and-low performance of a smoker. Work on perfecting in your charcoal grill game at home with this America’s Test Kitchen recipe for Thai Grilled Cornish Hens with Chili Dipping Sauce (Gai Yang).

Francis Lam: I live in an apartment and don't get to grill that much. But when I do, I love the romance and the challenge of charcoal grilling, or live-fire grilling, because there's the whole element of controlling the heat. I understand that there are lots of ways to construct the coal bed, and they’re used for different purposes. Can you walk us through that?

Doc Willoughby: Originally, we used two ways of arranging the coals. First, you had all the coals in one layer in the middle of the grill. That's good for things like shrimp or fish filets that you want to cook quickly; they go on, and they come off. The other way that is in wide use now is a two-level fire where you put the coals, or most of the coals, on one side. You've got a hot level, and then you've got a cool part of the grill. You can sear things on the hot part and put them on the cooler part to finish cooking or vice versa. It's also good when you're cooking more than one thing and need more than one level of heat.

Those are well-known and widely used, but along the way, we've ended up with a lot of other arrangements of the coals for specific purposes. Generally, they are for concentrating the heat of a fire. We were developing a recipe for carne asada in which we were going to grill skirt steak. Skirt steak is really thin; you want to get a good sear on it, but you don't want to overcook it. We kept trying to do it with the traditional ways of arranging the fire and couldn't do it. The cook who was working on this came up with the idea of concentrating the fire by taking an aluminum roasting pan and cutting out the bottom, so you have plenty of air circulation and then filling it completely with coals. What you get is a super-hot fire in the middle of the grill; it worked perfectly.

We went even further in that direction when we were doing thick-cut steaks, because the thing about thick-cut steaks is it's hard to cook them on the grill so that they're perfectly and evenly cooked in the center. What they ended up doing was cooking the steaks at a low heat in an oven until they were perfectly cooked all the way through. Then, they wanted a hard sear on them. Everything they tried – even the concentrated arrangement with an aluminum pan – they had to leave the steaks on too long. Dan Souza – who was working on this recipe – came up with the idea of leaving the coals in a charcoal starter, which is an incredibly intense heat. It's a funnel, so it funnels all that heat right to the top. Then he put skewers through the steaks, put them on the top of the charcoal starter chimney, and it took less than a minute to get a super dark sear.

DW: I thought, "No one is going to do this." Turns out it was one of the most popular recipes we've done. People are fanatics about their grilling.

Now we're working on a completely different kind of fire, where we want it to be low and burn for a long time. There's this arrangement of charcoal which has been developed by people who are trained to do barbecue on a covered grill; it's called “the snake.” What you do with the snake is you make a circle that is two or three briquettes deep around the perimeter of the grill. Then you put chunks of wood at intervals along that circle, so you get some smoke. You light one end, and it goes slowly. One coal lights the next, which lights the next, and so on. It takes a long time for that to happen. What you have is low, even heat with smoke over a long period of time. So far, they have gotten the fire to last six-and-a-half to seven hours.

You want this low heat to barbecue, and you don't want to take whatever you're cooking off the grill to put more fuel on the fire in the middle. Being as obsessive as they are, they tell me that it takes exactly 115 briquettes to make this work. But we're hoping that, as they continue to develop, they'll make it easier for us to not have to count briquettes and still get the six hours.

FL: You're not grilling so much as you're converting your grill into a barbecue smoker because it can't be that hot in there, either.

DW: That's the idea. They wanted to go further than the snake and make it "a snail" so that it curled into the center, and you could keep going longer. But that doesn't work because you have to put a pan of water in there to keep things moist. We’ll have to perfect the snake instead of going for the snail.

FL: Does the type of charcoal matter?

DW: In this instance, you need to use briquettes because the hardwood charcoal – which I really like for other purposes – burns too fast, and it burns a little hotter. Your snake would get consumed in 45 minutes or an hour instead of six hours.

FL: Thanks so much, Doc. There's a lot of experimenting that I need to do now.

DC: You're welcome. Let me know how it works out.