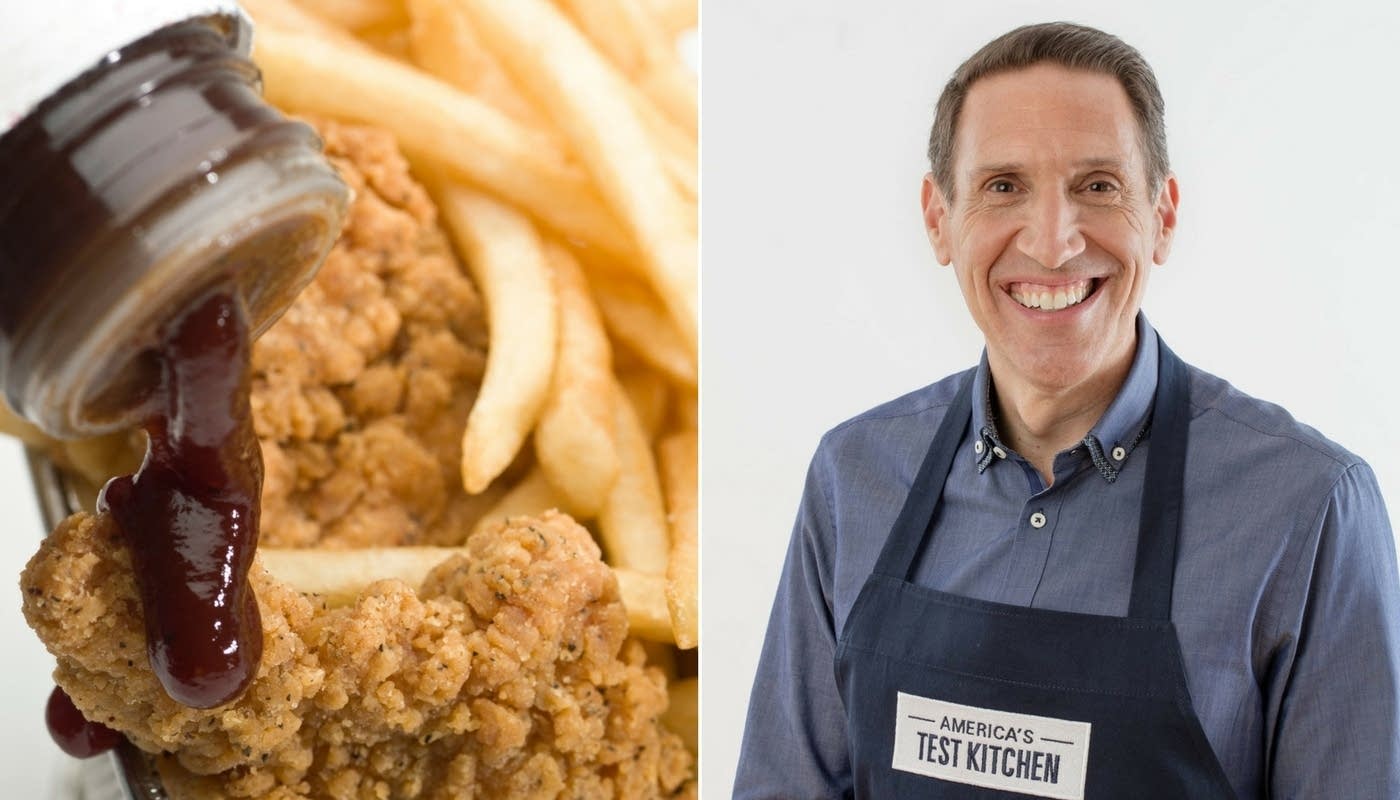 There are many regional takes on barbecue in the United States, each with its own idea of the perfect sauce to complement barbecued meats. However, when it comes to supermarket sauces, Kansas City-style sauces have become the national norm. Managing producer Sally Swift talks with Jack Bishop, chief creative officer at America’s Test Kitchen, about the results of a recent barbecue sauce taste test. Jack also shares some off-kilter, but surprisingly delicious, uses for barbecue sauce. Want to put your homemade sauce against the store-bought winner? Try making the America’s Test Kitchen recipe for Kansas City BBQ Sauce.

Sally Swift:  Are supermarket barbecue sauces based on a certain style of sauce?

Jack Bishop: Yes, this is a case where Kansas City rules. You can talk to people in North Carolina who make very vinegary sauces or in Texas, where they have very particular opinions on what barbecue sauce should be. But when you think about what’s on the supermarket shelves across the country, the sweet, tomato sauce that’s thick and clingy, like they make in Kansas City, is what most Americans think of.

SS:  You did a tasting – actually it was the second time around for you because your past champion changed its sweetener.

JB: That’s correct. After we do a tasting, we always monitor to see if the product changes. Our old winner swapped out a cane sugar for high fructose corn syrup, so we said it’s time to taste them all again. We did a series of tastings. We always do stuff straight from the bottle. We also do cooking applications and use them in pulled pork. Then we had them out on the table as a dip for chicken fingers. This is how we evaluated the seven best-selling brands, those that model this sweet, tomato-y, slightly smoky, slightly spicy sauce that most of the country agrees is barbecue sauce.

SS:  What were the characteristics that your tasters loved?

JB: Sweetness, but not too much. We want a fair amount of smoke, but not so much that you feel like you’re at a campfire, a good amount of spice, and a good amount of tang. Most of the brands ended up being overrepresented in one of these flavor characteristics. We were looking for that perfect balance where the tomato and sweetness are slightly in the foreground, then you get a lot of smoke, spice, and tang – but all in balance with each other.

SS:  What are your winners?

JB: Our winner turned out to be our old favorite, even though it’s been reformulated, Bull’s-Eye Original BBQ Sauce. It has that perfect balance with a fair amount of smoke and spice – more than a lot of the other national brands – and it’s sweet, but was not the sweetest brand we tasted. Some of the brands we tasted were honestly more like candy than barbecue sauce.

SS:  What was the big loser?

JB: At the bottom was Stubb’s Original Legendary Bar-B-Q Sauce. This one just wasn’t sweet enough and seemed overrepresented in the tang. It’s also very thin. One of the things our tasters wanted is a sauce that has the consistency similar to ketchup so it’ll cling to a chicken nugget or stay on that bun coating the pulled pork. Stubbs is a very thin, more liquid sauce.

SS:  It’s funny because when I look at all the bottles, the other bottles are plastic squeeze bottles, and Stubb’s is in a glass bottle; it looks a little more upscale.

JB: This is not a case of necessarily a “bad sauce,” it’s just a different sauce. For most of our tasters, as with most of Americans, they want a sweeter, thicker sauce. There are a lot of barbecue lovers in Texas that would say Stubb’s aligns with what they think barbecue sauce should be; it’s more vinegary and it doesn’t need to be so thick.

SS:  Can you give us some ideas of things to do with BBQ sauce that we may not think of?

JB: The first thing is any place you use ketchup, ask yourself could you use barbecue sauce instead? One of my favorite America’s Test Kitchen recipes uses barbecue sauce on meatloaf rather than ketchup to create a smoky, spicy glaze.

Something a little bit more out there is to make a macaroni salad with barbecue sauce. You still add mayonnaise, but you cut it about 50/50 with barbecue sauce. You get spicy, tomato, vinegar, smoke, all those great flavors. But it gives it a wild color; it turns bright orange. People are going to be like, “What is that?” But it’s fun and tastes great with all the summer barbecue foods.

SS:  Sounds like the Fourth of July to me.

JB: This last idea is going to rock your world because it’s so out there – a barbecue vinaigrette. Make a standard vinaigrette, add a couple tablespoons of barbecue sauce, and serve it over seared scallops. It seems like it isn’t going to work. But, again, it’s a shortcut to a lot of flavors: smoke, spice, tomato, and a little bit of vinegar.

Bull’s-Eye Original BBQ Sauce
$2.59 for 18 oz ($0.14 per oz)
This “all-purpose” product won over tasters with its “balanced sweetness,” “tomatoey” flavor, “subtle smoke,” and “nice tang,” all “without any of the flavors overwhelming each other.” This “straightforward” barbecue sauce was “immediately pleasing to the palate” and “not as gloppy” as some others.

Heinz Classic Sweet & Thick BBQ Sauce
$2.69 for 18 oz ($0.15 per oz)
Though some tasters found this product “a tad too sweet,” others enjoyed this “bold” barbecue sauce’s “very sweet” and “peppery” flavor combo, as well as the “bit of tang” and “nice smoky aftertaste.” This “viscous” product’s “smooth” texture and “addictive flavor” led one taster to declare, “The more I eat, the more I like it.”

Sweet Baby Ray’s Barbecue Sauce
$2.69 for 18 oz ($0.15 per oz)
This pleasantly “sugary” and “robust” product’s “instant hit of flavor” and “tangy bite” added up to “pretty perfect” flavor for some tasters, even though it seemed “supersweet” to others. This product’s “ketchupy” texture made it an “excellent barbecue sauce for dipping” while the “good spiciness” lent a “touch of heat.”

KC Masterpiece Original Barbecue Sauce
$1.69 for 18 oz ($0.09 per oz)
Most tasters enjoyed this product’s “pleasantly smoky” and “supersweet” flavor; its “good cling” and “thick” texture further won over tasters. A few tasters took issue with the sauce’s “unassuming” taste, saying the flavor was “too weak” and “needed a little more of a kick.”

Kraft Original Barbecue Sauce & Dip
$1.99 for 18 oz ($0.11 per oz)
This “candy-like” sauce’s “unique flavor” reminded tasters of “pumpkin-spiced barbecue” and “roasted fruit.” Even though this “very sweet” product was overwhelming for some and the “almost plummy” flavor “may not be mainstream enough,” the sauce was lauded for its “nice heat” and “hint of smoke.”

Jack Daniel’s Original No. 7 Recipe Barbecue Sauce
$2.99 for 19 oz ($0.16 per oz)
“It tastes exactly like a campfire,” noted one taster, describing this product’s “woodsy” and “liquid smoke” flavor. The “deep and smoky” sauce was “delicious,” “pure barbecue flavor” to some, but others found it “artificial” and thought this “meaty and savory” sauce “could use a pinch more sweetness.”

Stubb’s Original Legendary Bar-B-Q Sauce
$4.49 for 18 oz ($0.25 per oz)
Tasters likened this Texas-style (rather than Kansas City-style) product to “spicy, watery ketchup” that “was not sweet at all.” The “tart” and “sour” flavor reminded one taster of “old tomato puree,” while others took issue with the “metallic aftertaste” and “very thin” texture.