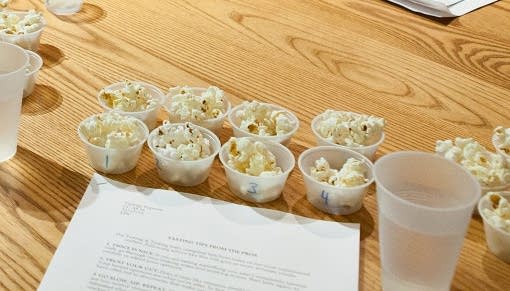 America’s favorite snack food – popcorn – has found a new favorite package. While sales of microwaveable and kernel popcorn have been steadily dropping for years, the options of pre-popped and bagged popcorn available at the supermarket are nearly overwhelming. Our friends at America’s Test Kitchen conducted a surprisingly technical taste test of bagged popcorns. Managing producer Sally Swift talked with Jack Bishop from America’s Test Kitchen about the results.

Sally Swift: Is it my imagination, or is microwave popcorn going to be a thing of the past, taken over by those giant bags of popcorn that are in the chip aisles?

Jack Bishop: The trend is moving towards already-popped bags of popcorn. Sales are up 60 percent since 2012 while sales of kernels that you pop at home and microwave popcorn are flat. People love the convenience of the already-bagged popcorn. It's also healthier. It's just popcorn, oil, and salt.

SS: I wouldn't have thought that. Let’s start from the beginning. How does popcorn actually pop?

JB: There's water inside those little kernels. When you heat up the kernels, the water turns to steam. That does two things. It starts to gelatinize the starches. It’s the same process that happens when you cook rice. Eventually, that creates enough pressure that the starch bursts through the tough outer coating of the kernel and immediately solidifies on contact with the air. That’s the puffy white part of any popcorn kernel that's been popped.

SS: You did a tasting of bagged popcorn. I was surprised – when I read the piece that you wrote – that popcorn kernels all pop differently, in different shapes. And that changes the way they taste. Can you talk me through that?

JB: I love this. We found an expert at the University of Nebraska-Lincoln who said that when a kernel pops, it goes in one of three ways. This depends on the breed, the amount of water, and the amount of heat. They classify them as unilateral, bilateral, or multilateral. And it totally affects the way you perceive the crunch factor in the popcorn.

Unilateral means that the starches have gelatinized and popped in one direction. These are the pieces that look like an octopus; they have a round head and appendages that all hang down in one direction.

The next is bilateral. Think of a butterfly. The starches went out in opposite directions; it looks like it has little wings on it with a fairly round center.

Then there’s the multilateral. For that, think of a little turtle with all the legs coming out of the shell. The starches gelatinized and popped in three or four different directions; there are lots of little appendages from the central part of the kernel. It turns out that the multilaterals are very spongy and soft, as opposed to the unilaterals, which are crunchy. To tie this back to our tasting results, we went through each bag of popcorn, took 100 pieces out at random, and then using a visual guide that the university professor gave us, we classified each of those 100 pieces as either unilateral, bilateral, or multilateral. We found a direct correlation: the more unilateral pieces – those octopuses – the crunchier the popcorn, and the better it did in our taste test.

SS: I would love to have seen you guys sorting that popcorn into piles.

JB: We're a little crazy. That’s the kind of thing that we're doing in the test kitchen – literally one by one, counting the 100 pieces out. Some brands only had 4 percent of the crunchy unilateral pieces; they were at the bottom of the rankings. Our top-rated brand had 50 percent unilateral pieces. It was perceived by our tasters as being much fresher, crisper, and crunchier.

SS: Essentially, the smaller pieces of popcorn are more appealing to us?

JB: Yes. And this is about texture. They all taste the same. There are only three ingredients in all these brands: popcorn, oil, and salt. While salt levels can affect the tasters' rankings, they liked the middle-of-the-road salt level. It was about texture, which makes sense. Popcorn doesn't have a tremendous amount of flavor; it’s mostly about the crunch. That's why you eat so much of it at the movies.

SS: What were your top four?

JB: The top-rated one – our clear winner – was Cape Cod. Our runner-up was Smartfood, then Kettle Brand, and finally, Popcorn, Indiana. At the very bottom of the rankings was SkinnyPop. This is the one that only had 4 percent of the crisp, unilateral pieces. It was an interesting tasting; I would never have thought that popcorn was so complicated.

SS: I was surprised to see BOOMCHICKAPOP at the bottom of your rankings as well, because that is everywhere.

JB: Again, that one had not enough of the crisp, unilateral pieces. It ended up at the bottom of the rankings. That's the way it goes.

SS: That's the way it goes. Unilateral rules. Who knew?

Jack Bishop is the chief creative officer of America’s Test Kitchen and the tasting lab expert on America’s Test Kitchen and Cook’s Country. Jack leads the creative teams working on the company’s television shows, magazines, books, websites, and online cooking school. He is also the author of several cookbooks, including Vegetables Every Day and The Complete Italian Vegetarian Cookbook.