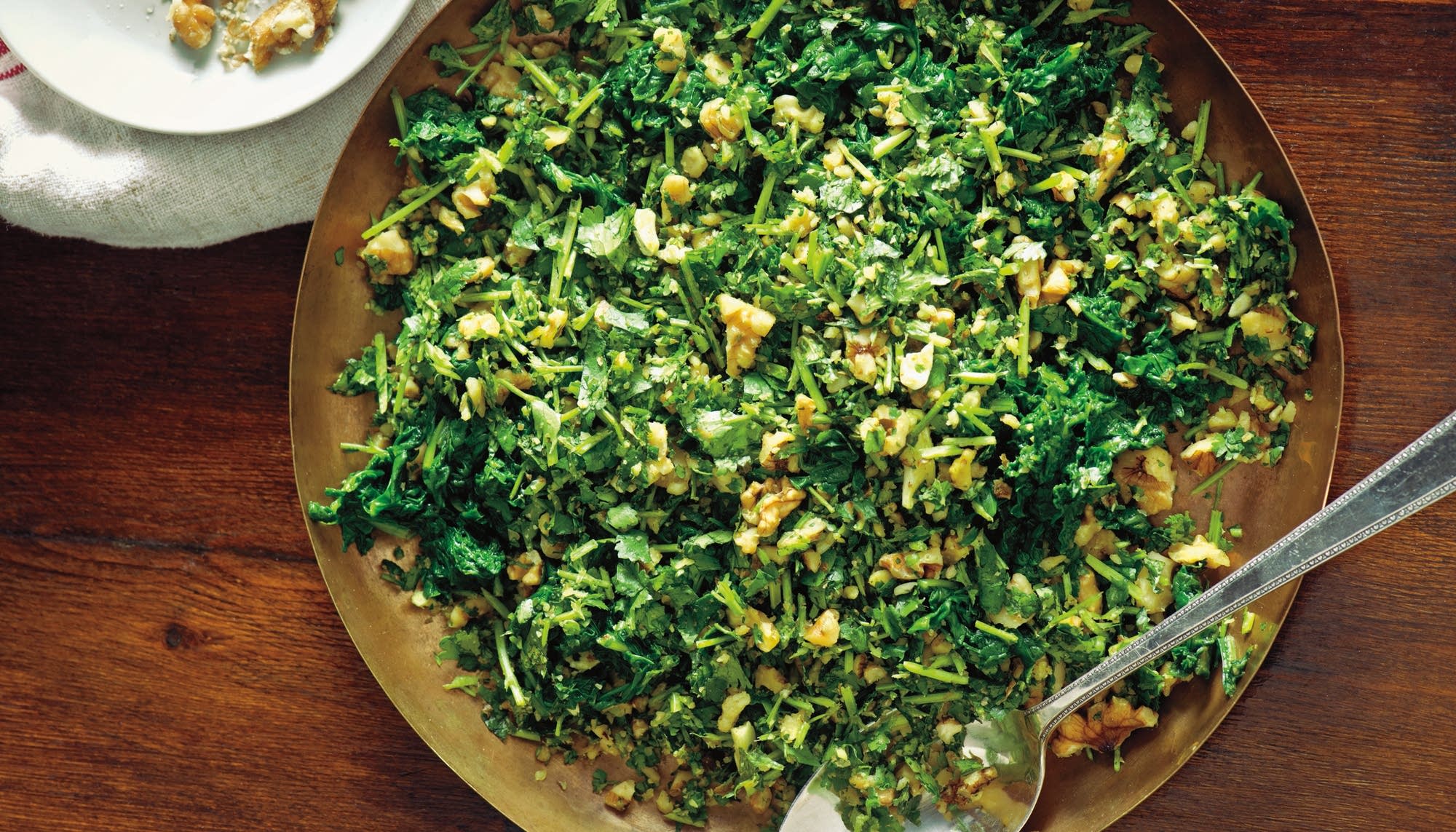 This is my favorite spinach salad ever. It is a very old recipe, with origins in Persia (its name comes from the word aspanakh, meaning “spinach”). There is something delectable about the juxtaposition of ground nuts and ground spinach, and the recipe has seemed to follow my travels. I first tasted it many years ago when I went to Georgia (then part of the Soviet Union), in the late 1980s, then again years later in Brighton Beach, Brooklyn, at the restaurants along the boardwalk. Most recently, I tasted it at Racha, a Georgian restaurant in downtown Jerusalem.

Today, most of the Jews from Georgia have immigrated to Israel; others have moved to the United States.

Two of them who came to Israel as children in the 1970s were Lily Ben Shalom, who became a post office employee, and her brother Israel Shahar, an electrical engineer. They had a dream of opening a restaurant, so they saved their money and family mementos of the distant colony of Racha, the western province of Georgia, whose Jewish community dates back 2,600 years.
A few years ago, they opened a charming restaurant in a stone British Mandate–era office building, right across from the office of the original Jerusalem Post. They scavenged an aunt’s cupboards to fill the restaurant with family pictures on the walls, white lace curtains on the windows, Georgian music, and recipes passed down through generations in the kitchen, ultimately re-creating the ambiance of the country they left behind.

“We cook how they cooked at home,” said Israel, the chef. “We don’t have any cookbooks. The recipes come from the head and the hand.”

1. If using kale, massage with olive oil. If using spinach, bring a large pot of water to a boil and add the spinach. Blanch for about 30 seconds, just to wilt, then put in a bowl of ice water to retain the bright green color. Remove from the water, squeeze, and dry well.

2. Put the spinach or kale, cilantro, walnuts, and garlic in a food processor with a steel blade and pulse almost to a paste but still leaving some crunch. Remove to a bowl.

3. Stir in the vinegar, hot pepper or pepper flakes, and salt and pepper to taste. Serve at room temperature.

Excerpted from King Solomon's Table by Joan Nathan. Copyright © 2017 by Random House. Excerpted by permission of Alfred A. Knopf, a division of Random House LLC. All rights reserved. No part of this excerpt may be reproduced or reprinted without permission in writing from the publisher.