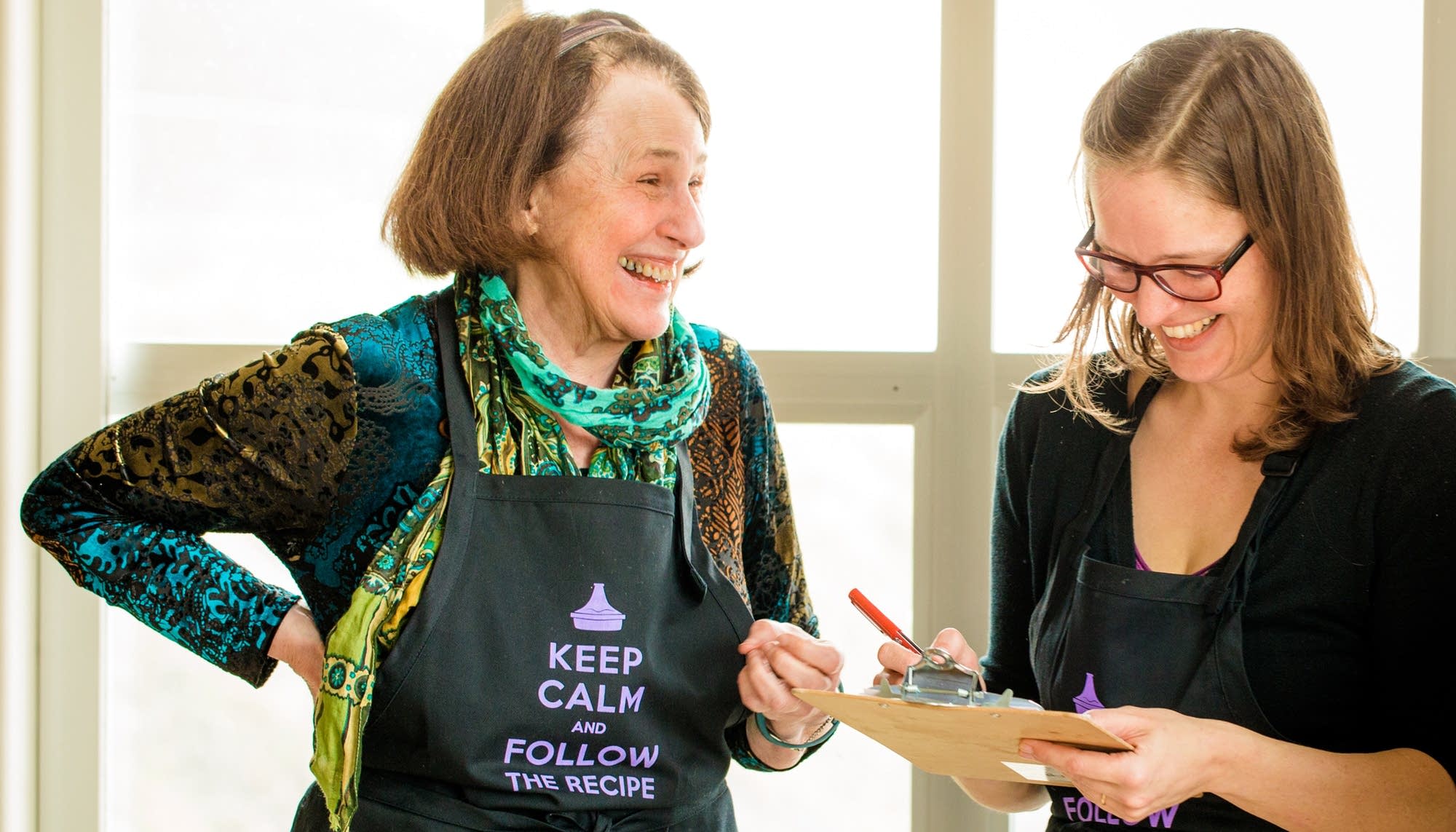 Paula Wolfert is a one of the world’s most influential food explorers and cookbook writers. She’s most famous for breaking open the world of Mediterranean flavors in America. The way she did it defined a whole style of food writing – intense, immersive research, making no compromises in her recipes, and cooking things exactly as she saw them. But there’s a cruel irony in her story. The woman who’s done so much to document cuisines for posterity is battling dementia.

Emily Kaiser Thelin was Paula’s editor at Food & Wine magazine. Over the years, the two become dear friends. Thelin also decided to write a biography of Wolfert in hopes of saving her memories before she lost them. The book is called Unforgettable. Host Francis Lam talks with Thelin about Wolfert’s life and career, and the process of uncovering memories through cooking. Thelin share with us two of Wolfert's recipes from the book: Cassoulet in the Style of Toulouse and Sole Dugléré. See more recipes and hear more from Paula from over the years on The Splendid Table at our Paula Wolfert Collection page.

Emily Kaiser Thelin: That was one of my favorite discoveries. Because one of the things that struck me about Couscous [Ed. Note: Wolfert’s 1987 book on Moroccan cooking] when I read it – when I was a timid line cook in my early 20s – was how unbelievably bold and brave she seemed. There’s this amazing back cover image in the book – that’s now her front piece cover of Unforgettable – where she’s plowing through this market in a beautiful Moroccan robe and looked like she absolutely owns the world. So, there I was in Morocco desperate to ask her, “Where did you get your bravery?”

It turned out that her cooking career started almost as a total act of panic. Her first husband – with whom she had been married, had two kids, and lived very happily with in beatnik capitals in the Mediterranean for many years – up and left her in 1968 with only a couple thousand dollars. She had no career; she had been a housewife. She had no faith in herself. She heartbrokenly retreated to New York with her kids and had to do something. She dallied in cooking to a quite deep degree, but basically dallied in her first years out of college. She thought, “That’s all I got. I have to give it a shot.”

She worked her unusual beatnik connections and found her way to CBS Records, which was launching this wild service – quite similar to Blue Apron or Sun Basket today. Pardon the plug because I work at Sun Basket, but it was at a much deeper level. They would ship a six-course dinner party to serve along with an album of music. There was this surging trend in international cooking, throwing dinner parties, and having these little gourmet clubs. They made the mistake of hiring Paula to run things; she went off the deep end. She had a French dinner party which involved skinning and poaching your own trout, making your own aspic from the poaching water, getting some tweezers, cutting up a pimento pepper and lemon zest into little floral petals, and making flowers on the trout in the aspic – then making her own mayonnaise and pureeing spinach into the mayonnaise. And that was just one of six courses.

She started with French, then Chinese, and thought, “I’m going to do a Moroccan box.” That eventually led to the Moroccan cookbook because Columbia House Records [Ed. Note: a division of CBS Reords at the time] realized nobody was buying these incredibly complicated dinner party boxes and shut down the program, leaving Paula totally stranded. It’s interesting because we can see it from a mile away, but Paula was totally devastated. It was, again, in an act of panic that she thought, “Hell, I’ll just do a book.” Ironically, she was working on a Moroccan party box and a Mexican party box at the same time. To help her with the Mexican party box, she’d taken a cooking class in New York with a totally unknown, aspiring cookbook writer named Diana Kennedy. They became best friends, and it was Diana who introduced Paula to her editor at Harper & Row who bought the Couscous book. When Diana called her editor, Fran McCullough, she said, “Fran, I have a woman here who I think is the real deal.” That’s all Fran McCullough needed to hear. And she bought Paula’s proposal.

FL: That’s incredible. And she turned out to be the real deal.

You’re writing the biography of a living person. It’s not just research into their papers, archives and interviews with friends and families, it’s how you extract the story from a living human being. In 2013, I believe, Paula was diagnosed with dementia, possibly Alzheimer’s. There’s this horrible irony there of needing to find the memories of a person who’s losing them. When you’re doing that, you said that cooking with her was one of the ways you could help bring those memories back. Tell me about that.

EKT: We started the project in 2010 when I moved from New York to California. We were both intimidated at the idea of an entire biography, so we tricked ourselves and said we’d do a series of oral histories. I interviewed her, and I’m glad we did that because I was able to get very clear memories of her early life where she doesn’t have a lot of archival records. After 2013, we started plunging into her professional life where she does have an enormous amount of archival records, but her memories are more fuzzy.

It was fascinating, the whole process of cooking, beginning with having her flip through the cookbooks and look back over her own recipes. It was amazing, not just the specific memories, but the overall feeling she could recall about each book. Because she’s written nine books – and each one over five years – each book has a deep tie to a specific period in her life. It was like each book is a little scrapbook on an era of her life, but also – because she was so aware and plugged into the American food scene – it was also a mirror of what was going on in America at the time. For example, her Mediterranean Grains and Greens book which she wrote in the later 1990s was a reaction to her moving to San Francisco and discovering this explosion in organic farmers markets. And Paula put it together, “If there’s all these organic farmers, then they’re going to have all these edible weeds. So edible weeds are going to be the next big thing.” She did this deep dive into purslane, nettles, and horsemint. Of course, the book is now out of print because she was so far ahead of her time on that.

It was fun. As she was flipping through the pages, she’d say “I really went somewhere creative with this!” She was impressed by her own work. Dementia is cruel but also – it sounds weird to say – a sort of “human” illness, because they think it attacks your brain in the order in which your brain was developed. It attacks every patient’s brain in a different way, so it is specific to that person. How it affects them on a day-to-day basis, on an hour-to-hour basis, on a minute-to-minute basis changes constantly, and so you never know what you’re going to get. I think I say “human” because it requires you to be in the moment and very present with that person. In an interesting, heartbreaking way, we had these very present exchanges over her food. For example, I made this Sprinkle Pie that’s loaded with blended greens. She took a bite and said, “I don’t remember anything.” I was like, “Alright, we’ll try again.” She took another bite and said, “Oh yeah, I learned this with Aglaia [Kremezi].” Little by little, bits would come out. But to hear her say, “Oh yeah” gave me such a charge because it always was such a crapshoot what was going to come out.

FL:  Tell me about the physical act of cooking with a person who’s struggling with this illness. You write in the book, “Here are some tips on how to retrieve memories with food.” One of the things you write is, “Sometimes when you’re cooking with them, their hands know what to do even if they say their mind doesn’t.”

EKT: One caveat I should offer, we learned early on to keep her away from the stoves. Her whole way of processing the cooking process was altered by this illness. We confined her to prep, watching us cook, and offering advice. One of my favorite moments is we cooked a dish that she learned in 1958 – or 1957 – under Dione Lucas, this kind of precursor to Julia Childs; Paula landed in her cooking class. It was this dish called Sole Dugléré, a classic French fish dish that set Paula on fire about food. It made her want to drop out of college and apprentice herself to Dione. I thought, “I want to make this dish and see what memories those evoke.” It’s a very Paula dish; there are a lot of complicated steps that are counterintuitive that you think aren’t going to work. I was panicking while I was making it. I said, “Paula, this isn’t right.” She said, “I think it looks right. I haven’t made this dish in 50 years, but I think it looks right.” I said, “Do you have any idea what she means about roll up the sole filets?” She grabbed the fish out of my hand and immediately started rolling them up. You could tell that even while she was saying, “I have no idea,” there was this physical reaction that had such utter confidence. You knew she had done this a hundred times at some point in her life; it just came back to her hands before it came back to her mind. It was really something.