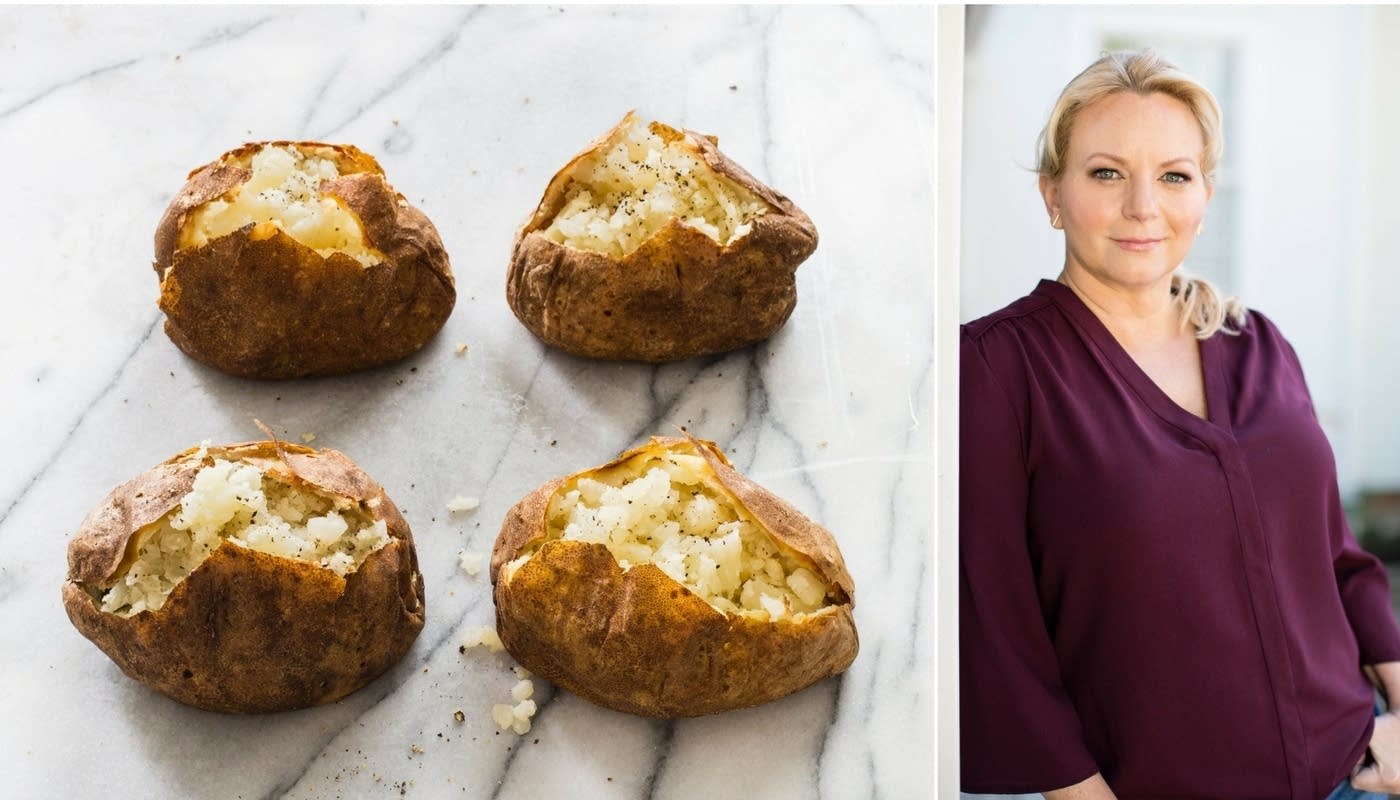 Baked Potatoes seem deceptively simple. You just wrap a potato in foil and throw it in the oven, right? But that method is not likely to yield the perfect, fluffy potato you desire. Bridget Lancaster, host of America’s Test Kitchen, joins managing producer Sally Swift to debunk the common myths around baked potatoes and share their recipe for the Best Baked Potatoes. That recipe page also includes instuctions for making two wonderful potato toppings: Creamy Egg Topping and Herbed Goat Cheese Topping.

Sally Swift: I do yoga at night. Often what I want when I come home is a baked potato and a salad. I'll pop that potato in the oven before I leave, I come home and – voila! – there it is. Sometimes it's great. Sometimes it isn't. Is there a way to make the perfect baked potato?

Bridget Lancaster: There is. This was one of these recipes where I've been at America’s Test Kitchen for so long I thought I've seen everything. And do people really need a recipe for a baked potato?

SS: Right. But obviously, yes, we do.

BL: You want a potato that's nice and crisp on the outside. The inside is fluffy from the very center to the outside or right underneath the skin, and you want it to be relatively quick. Microwave is out of the question for many reasons. If you want those results, then you're going to get a recipe. But it's not very complicated.

SS: What have you figured out?

BL: It starts with the right potato. Most people know that Russets are the premium baking potato. They're high starch and low water. That's important because the starch is going to absorb that water and swell up. When you cook the potato, it gives the crumbly, plumpy texture that we think of as “fluffy.” Start with the Russet.

SS: Can I just say this before we go on? I love Yukon Golds and some of those yellow potatoes. Are they not good for baking?

BL: They're not great for baking; they'll be just okay. If you want so super fluffy that you almost don't need any butter and sour cream, almost lighter than air, you’ve got to go with the Russet. Save the Yukons for something else.

SS: What temperature should you do them at?

SS: Really? That is high.

BL: That's really high. We know that we can bake a potato at 350, 375, even 400. But it's going to take a while. It's going to take an hour and a half or longer. Again, we didn't want to resort to the microwave because that makes a potato that cooks unevenly. We tried 500 degrees, but that overcooked under the skin, and it was very hard. It's actually called a pellicle; it’s a kind of shield around the potato. We found 450 degrees was the right temperature. It wasn't going to burn the exterior, but you're going to get good hot potatoes in just about an hour.

SS: You are looking for a certain internal temperature in the potato, I would assume. I know you're going to whip out a thermometer here at some point.

BL: You know us way too well. We definitely have a thermometer addiction, but for good reason. We want the baked potatoes to be cooked to 205 degrees. That’s the magic spot. You know how traditionally you bake the potato, squeeze the outside, and it feels nice, fluffy and soft? We found that that might be great on the outside – it’s probably above 205 degrees, which is what gives us that fluffy texture. But inside it might be 10 to 15 degrees cooler, and it hasn't cooked through yet. Take a probe thermometer, stick it in one of the largest potatoes that's in the oven, and wait until it says 205.

SS: How do you get that skin crispy?

BL: You cannot put oil or butter on the potatoes right when you put them into the oven. A lot of people do that. I did that for years with bacon fat – of course, I like bacon fat on anything. I never realized why the skin was either rubbery or thin and peeled away from the potato. Instead, we want the skin to be almost like a potato chip on the outside.

BL: Before we put them in the oven, we brine the whole potato. Just dunk it in a little bit of salt water. Get it well-coated. The water is going to evaporate in the oven, and the salt is going to be left behind. Season the skins, and then after the potatoes have baked for about an hour, take them out and brush them with a bit of oil. They go back into the oven for about 10 minutes and get super crisp.

SS: Do baked potatoes keep? Should you be slicing and eating them right away? What's the rule?

BL: I would definitely eat them right away. But what's really important, after they bake – again, up to 205 degrees for about an hour – cut them open immediately because all that steam is going to come out. It's going to ensure that the potato stays nice and fluffy inside, instead of soggy. We weighed potatoes that sat around for 5 or 10 minutes before we sliced them open versus ones that we tore open right away, and it was amazing. Not only the texture of the interior – the baked potatoes that weren't cut open immediately didn't have that fluffy interior – but they also weighed a lot more. That meant that the water was still in there.

SS: Wow, that's interesting. And then my last question. Do you prick them or not prick them?

BL: This is always one of the questions. Because they're going to blow, right? That's what I was always told. We baked at least 40 potatoes without pricking them, and we never had a single one burst open. However, we still recommend it because that one time that you don't do it, that's going to be the time that it busts open. Better be safe than sorry.