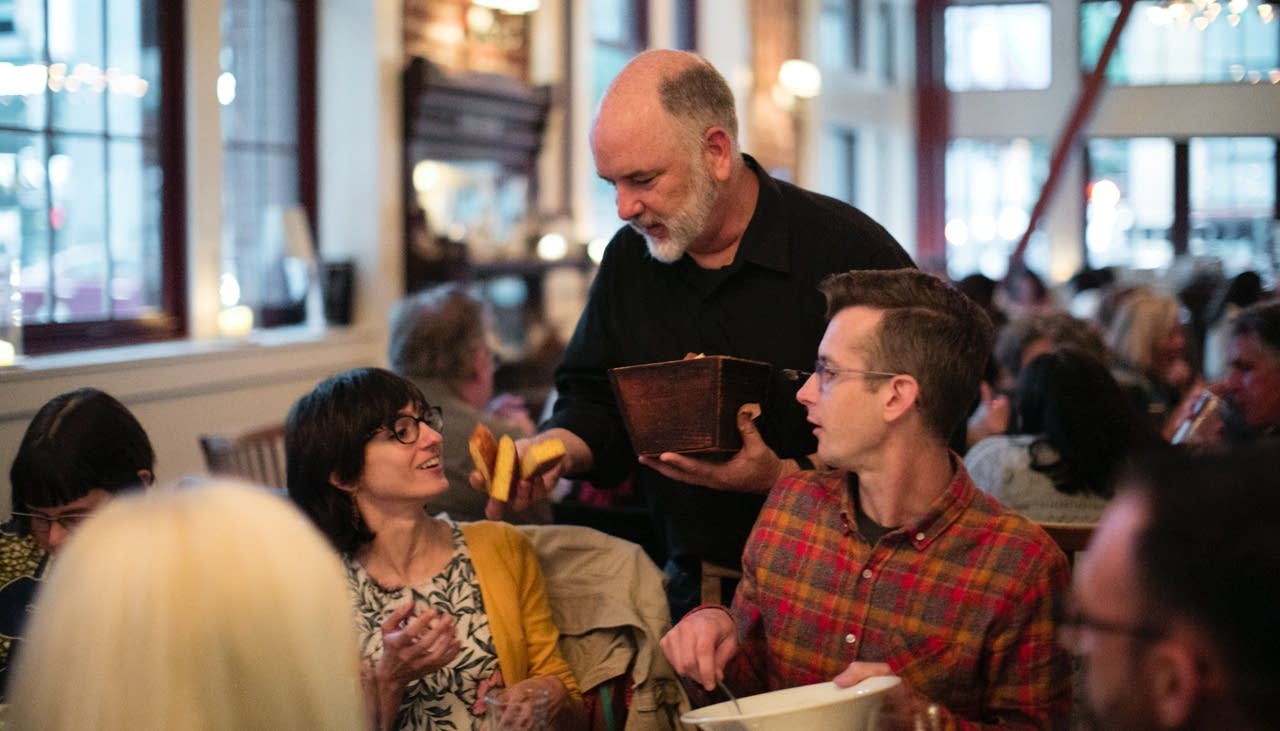 Pableaux Johnson has a table. It’s a big wooden hulk of a table the New Orleans photographer inherited from his grandmother. Over the many years he’s had the table, Pableaux has fed anyone gathered around it every Monday night – whether he knows them or not. On the menu: red beans and rice, corn bread, and whiskey for dessert. However, it’s never the same group of people twice. Instead, the table attracts a rotating ensemble of friends and friends of friends. Host Francis Lam talks with Johnson about this Monday night tradition and what it means to the thousands of people he’s fed over the years. Make your own Monday night tradition at your home using Pableaux Johnson’s recipe for Monday Night Red Beans and Rice.

Francis Lam: Let’s start from the beginning. How did you get to thinking, “You know what? I’m going to start feeding random people at my house every week?”

Pableaux Johnson: It didn’t start off quite as random. Before I lived in New Orleans, I lived in Austin [Texas] for about 10 years. My entertaining style in Austin was doing whole-day parties – big gumbo and red beans parties – that eventually 150 or 200 people would come to over the course of a Sunday. When I went to New Orleans, I had my grandmother’s table. I decided to switch to weekly because one of the long-standing food traditions of New Orleans is red beans on Monday night. Instead of doing 150 people once every three months, it became 10 to 12 once a week. That changed the rhythm of the way that I cooked, and that changed the menu I served.

It adapted to something that was easier and lower maintenance to pull off on a Monday. People aren’t often doing things on Monday nights so it tends to be free and a good break during the early workweek. It’s something to look forward to, and that’s where it came from. Once that ritual and rhythm was established, you have 10 to 12 seats to fill every week. It started off with a smaller group of friends, then it became bigger, and everybody rotated in and out until it was a large-format, kismet-driven, weekly event that everybody looked forward to.

Pableaux Johnson on the tradition and importance of Monday night red beans and rice
Source:Monday Beans from A Spoken Dish on Vimeo.

FL: I love that it’s the same thing, not just in terms of ritual, but you have this thing that you’re doing every single week on the same day. It’s not entertaining. It’s not a dinner party. It’s not, “How am I going to impress people? What am I going to do?” You’re just feeding people, and it’s a constant. It’s as much about the idea of ritual, community and family as it is “Hey, let me cook for you this awesome thing.”

PJ: One of the things that’s important about that table is it wasn’t the dining table at my grandmother’s house; it was the kitchen table. That was where all the grandkids went, and I was of that generation. The fancy dining room table didn’t get used every day, but this one did. This was where all the power was. This was in my grandmother’s kitchen so this was also the center of community.

During big holiday meals as kids, you wanted to be invited to the fancy dining room table. But once you got there, you almost always wanted to come back to the kitchen table because that felt more like home. You didn’t have to wear special clothes to sit at the kitchen table. That’s a tradition that I carry forward. When people describe the gathering as a salon or a dinner party, I almost always correct them. It is just people getting together and talking. It’s supper, not a dinner party.

There have been attempts at different times for people to do things like, “We should bring a salad. Can I bring a salad?” I try to gently discourage that. Part of it is I don’t have 12 salad plates. And once you start adding different complicated components to it, things get complicated very quickly. That’s also about twice as many things I have to clean up – and I’m cleanup adverse. I like having it be “serve yourself.” I put a roll of paper towels on the table for linens. I put the spoons in the middle. Everybody gets their own drink and it’s self-serve. If you want more, get up and get it.

That informality helps people be more comfortable and concentrate on whatever random conversation is going to happen. Sometimes it’s full table with twelve people. Sometimes it’s all one big conversation and it’s great. Other times, there are zones. There are two conversations of six or three groups of four. It’s like that random set theory you had in grade school. I’ve been at the table long enough to look around, see the different conversations going on, and do little bits of eavesdropping here and there. It’s wonderful because people find who they’re going to talk to. It’s just large enough and just small enough. It’s still human scale, but it feels like a bigger table than people generally get to sit at in the course of their normal life.

For me, it’s an easy thing. Once you build up those muscles, it’s nothing to do it. One of the great joys for me is I get to connect with a wide variety of people, a lot of them from in town, who I may happen across, maybe I’ve not seen them for a few months. You don’t have to say, “We should get together sometime.” You can say, “What are you doing this Monday, next Monday, or the following?” It’s an excuse to fill the table. It also keeps me honest in keeping my house relatively clean.

It’s a great chance to learn from people you know or people you don’t. I’ve made a lot of good friends who were friends of friends – either recommendations or they came as guests. Like, “Hey, I got a friend coming in from out of town. Is there room?” And there’s usually room. There’s very few times when there’s not. Because one of the south Louisiana rules is that if too many people show up for the food that you have, you can always make more rice. The rule is: “Make more rice. Make family eat last.” And that’s generally not a problem. If it’s supposed to happen, you can find a way to make it happen; that’s just basic hosting. Again, that goes back to it being a very simple meal and not having a lot of expectations. It’s that dish done really well, but it’s still just supper. Don’t try to fancy it up. Come with a bottle of wine, a six-pack of beer, or some fizzy water. We’ll eat, drink and see what happens.