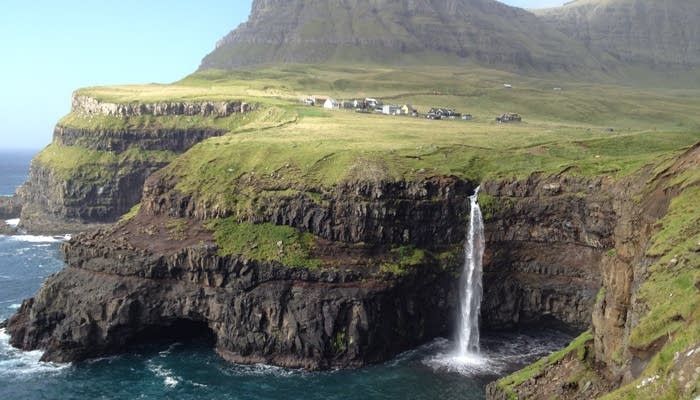 Remote and rocky, The Faroe Islands are an archipelago located between Iceland and Norway, between the Norwegian Sea and the North Atlantic. With their many waterfalls, dreamy green grass landscapes, and snow-topped volcanic peaks, the islands are place of unique beauty. However, almost literally nothing resembling food grows on the islands, not even trees. The local diet was always a subsistence diet of fermented lamb and dried fish, until one chef opened a fine dining restaurant using native ingredients and traditions. By doing that, chef Leif Sørensen ended up essentially inventing Faroese haute cuisine all by himself. Host Francis Lam shares his memories of a visit to the Faroe Islands and the food prepared by Sørensen.

Hearing Sheldon Simeon talk about the richness of Hawaii, it seems like such an obvious place to have a vibrant cuisine. All the ingredients are there, you have this fantastic climate and rich soil, and all these different cultures that have come there. But it also made me think of the cuisine of the Faroe Islands, because the Faroes are pretty much the opposite of Hawaii. Smack dab between Iceland and Norway, it’s a country of just 50,000 people, almost all of them the descendants of Vikings who landed there 1,000 years ago, and they’re quick to tell you that there are more sheep than people.

It’s one of the most beautiful places I’ve ever been. There’s this vastness to the sky and sea, but there’s also this intense feeling that anywhere you can lay your eyes on you can just get up and walk to. It’s a magical feeling, almost like you’re floating above the earth. It was summer when I was there a few years ago, which is to say it was 50 degrees, but brilliantly, just incredibly green. Glowing, neon green.

But for all their intense green and beauty, the Faroes are one of the most barren places I’ve ever been. In the 1600s, a Danish priest moved there and wrote home about it, writing: “Countries are praised for their great wealth, several metals, minerals, precious stones, pearls, wine, and grain. But all this God denied the Faroes.” Which is really cold coming from a priest!

Potatoes are about the only thing that people actually try to grow there. Most of the traditional food is basically a subsistence diet of fish or lamb, fresh or air-dried potatoes, birds if you can get them, and some medicinal herbs that grow in the warm months. There are hardly any vegetables, no fruit to speak of, not even salt, because it doesn’t get enough sun to evaporate seawater into salt. And yet, when I was there, I met a man named Leif Sørensen who was single-handedly inventing a fine dining cuisine of the Faroe Islands.

In his restaurant, I had an unreal tasting menu. He knew one man on the island who grew turnips in his dad’s yard, and for some magical reason, they tasted, I swear, like pears and cantaloupes. I had turnip juice that tasted like pears and cantaloupes to go with my dinner. I had an insanely fat mussel with seaweed smoke. And the sweetest langoustine ever, which he’d seasoned with dried seaweed instead of salt.  [Ed. Note: Sørensen founded the restaurant Koks, which is where Francis dined during his trip. But Sørensen has since left for other projects.]

Underneath each dish was a story of how hard Leif had to work to make this cuisine almost out of thin air. The Faroes have some of the best seafood in the world, but Leif couldn’t get local fish in his restaurant because all the seafood vendors were geared for export, so he asked his dad to go out and fish for him. He could serve me that mussel because he happened to know a guy who was a construction worker on a bridge, who looked down while working one day, saw some shells in the water, and went diving for them – it was a mussel! Leif was so excited he went to the prime minister’s house to lobby to change the laws so he could serve local shellfish, and like that, he invented a Faroese shellfish industry.

He couldn’t get enough people to work in the restaurant with him, so he was serving tables while running the kitchen. His sous chef was actually an old protégé of his who was home for vacation from his real job, cooking in Copenhagen.

Honestly, a lot of his neighbors didn’t get it. They can get imported food now in a grocery store, so they didn’t understand why Leif wanted to cook Faroese food. Or on the other end, people were like, “Oh what, our food isn’t good enough so you have to make it fancy?” His cousin came in for dinner once and laughed at the portions. When the server delivered his dish, he said, “Don’t go anywhere,” then ate the whole thing in one swipe of his fork and handed him the plate back.

But through all this, Leif kept working, kept inventing, kept finding new foods in his tiny home country. He eventually left the restaurant, with his protégé deciding to move home to the Faroes and taking over. Just earlier this year, the Michelin Guide, France’s old-line arbiter of taste, came and gave the restaurant a star. It made the news all over Scandinavia: the Faroe Islands, where so little grows, has one of the most coveted awards in food.

Cuisines are always built on the happenstances of history, culture, environment, and climate. But sometimes, every once in a while, they’re built on the vision of just one person. Amazing.

The Splendid Table would like to thank Matthew Workman for providing us with a photo and additional information for this article. Workman is the producer of The Faroe Islands Podcast, a podcast that explores the news, culture, and politics of the Faroe Islands. In 2012, his show was named European Podcast of the Year. Food-related episodes include a lobster feast and an interview with Gutti Winther, who stars in a TV show where he travels to all 18 islands and cooks something caught or harvested from each island.

Francis Lam is the host of The Splendid Table. He is the former Eat columnist for The New York Times Magazine and is Editor-at-Large at Clarkson Potter. He graduated first in his class at the Culinary Institute of America and has written for numerous publications. Lam lives with his family in New York City.
Red Rhubarb Amaretto Torte
Lamb Koftas in Tahini Sauce (Lahme bi sayniyi)
Blackberry Doobie
Cacio e Pepe 7-Minute Eggs