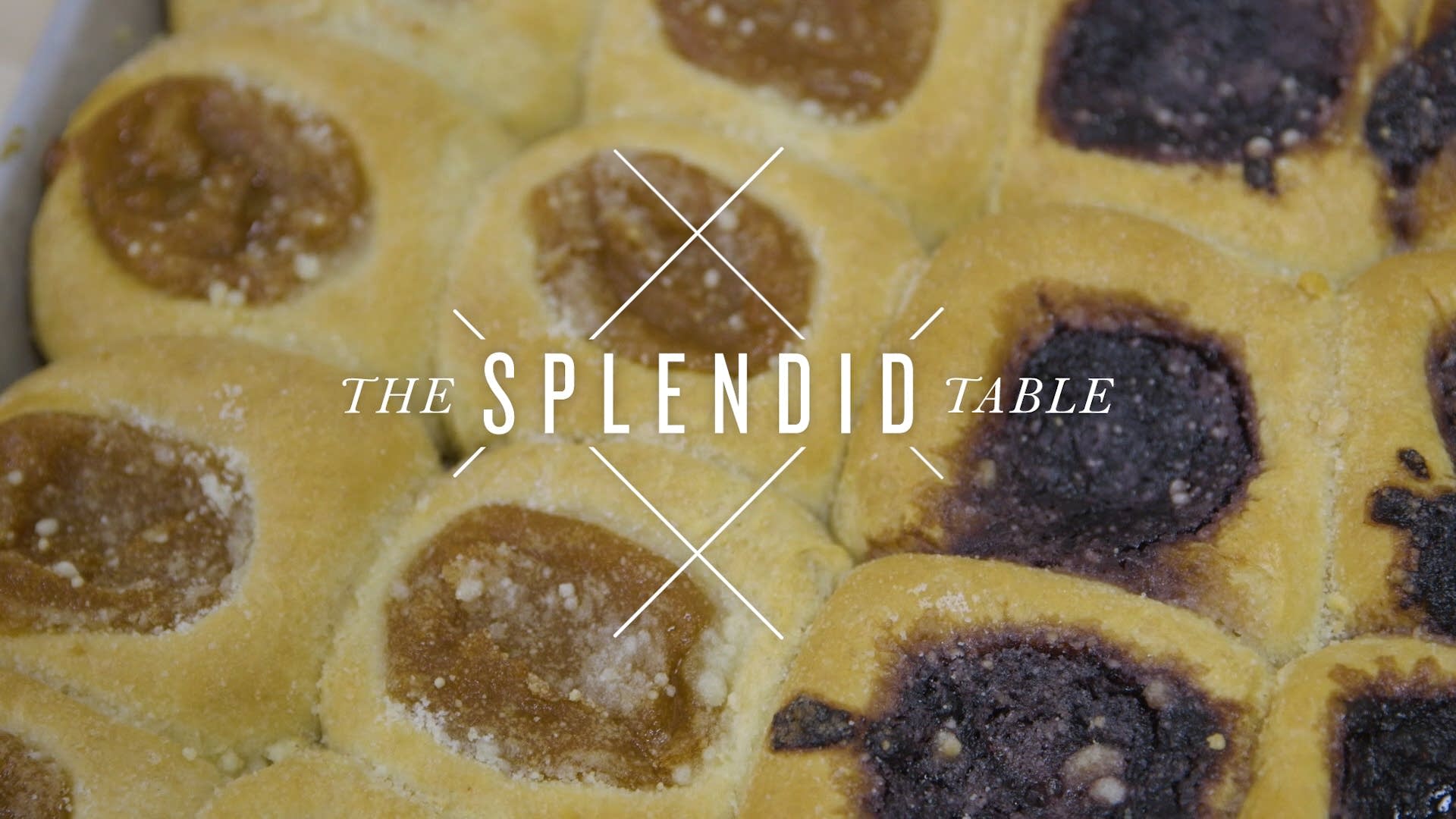 Texas has a sizable Czech population, and many Czech foods have become an integral part of today’s Texas cuisine—kolaches being one of the most popular examples. Czech immigrants began to arrive in Texas in the early 1850s. In the above video, baker Nicholas Maresh of The Old Main Street Bakery in Rosenberg, Texas, talks about the heritage of kolaches in Texas and demonstrates, along with his grandma Mary, how he makes them (starting at midnight!) so they are ready for his first eager customers at 6:00 AM.

Begin by making the streusel topping. Combine all ingredients in work bowl of food processor fitted with steel blade. Process, using on/off pulses, until the mixture resembles coarse meal. Do not over-process. Turn mixture out into a zip-sealing bag and store in freezer while preparing the filling and dough.

Make the dough. Combine the yeast and one tablespoon of the sugar in a 2-cup Pyrex measuring cup. Heat the milk to approximately 110°F. Gently whisk half of the milk into the cup with the yeast and sugar. Set aside to proof, or until the yeast has dissolved and the mixture is bubbling and foamy. In bowl of stand mixer fitted with dough hook, place the remaining sugar, the oil, the salt, the remaining 1/2 cup of milk, and 1 cup of the flour. Starting on low speed, beat the mixture until the flour is incorporated; then increase to medium speed and beat until blended. Add the yeast mixture, the remaining flour, the softened butter, and the eggs. Begin again on low speed until the flour is incorporated, then increase speed to medium and knead the dough until it is very smooth and elastic, about 6 minutes. The dough should not stick to the side of the bowl. If it is too wet, add additional flour, one tablespoon at a time, beating to combine after each addition, until the dough is the right consistency.

Turn the dough out onto work surface and knead 4 to 5 times by hand, or until the dough springs back when pulled. Lightly oil a large bowl and place the dough in the bowl, turning to coat all surfaces with the oil. Cover bowl with plastic wrap and set aside to rise in a draft-free spot until doubled in bulk, about 1 hour.

While the dough is rising, make the filling. Combine the cream cheese, egg yolk, sugar, lemon zest, and vanilla in work bowl of food processor fitted with steel blade. Process until smooth. Turn out into a separate bowl and set aside. Combine the blueberries, sugar, lemon juice, and water in a heavy-bottomed 2-quart saucepan over medium-high heat. Cook, stirring frequently, until thickened, about 8 to 10 minutes. Remove pan from heat and mash the blueberries with a wooden spoon until chunky. Set aside to cool.

When the dough has doubled in bulk, punch it down and divide into 2-ounce balls. Line 2 baking sheets with parchment paper. Arrange 12 of the balls on each prepared baking sheet, placing them 3 across and 4 down. Flatten the balls with the palm of your hand. Using a pastry brush, brush each flattened dough ball with some of the melted butter, taking care not to drip butter on the parchment paper. Cover loosely with plastic wrap and allow to rise for 20 minutes.

Flatten the dough balls once more and make a deep indentation in the center of each. Spoon equal portions of the cheese filling into each indentation. Top the cheese on each kolache with a heaping tablespoon of the blueberry mixture. Scatter a portion of the streusel topping over each. Cover loosely with plastic wrap and set aside to rise for 30 minutes. Preheat oven to 350°F.

When the kolaches have risen, bake them in preheated oven for 30 to 35 minutes, or until golden brown. The cheese should be lightly browned and the peach preserves melty and lightly browned. Remove to a wire rack and cool slightly before serving. The kolaches can be cooled completely and frozen. Wrap tightly in plastic wrap and place in zip-sealing bags, squeezing out all of the air from the bags. Freeze for up to 6 weeks.

* * *
From Breakfast in Texas: Recipes for Elegant Brunches, Down-Home Classics, and Local Favorites by Terry Thompson-Anderson.

From Breakfast in Texas: Recipes for Elegant Brunches, Down-Home Classics, and Local Favorites by Terry Thompson-Anderson.