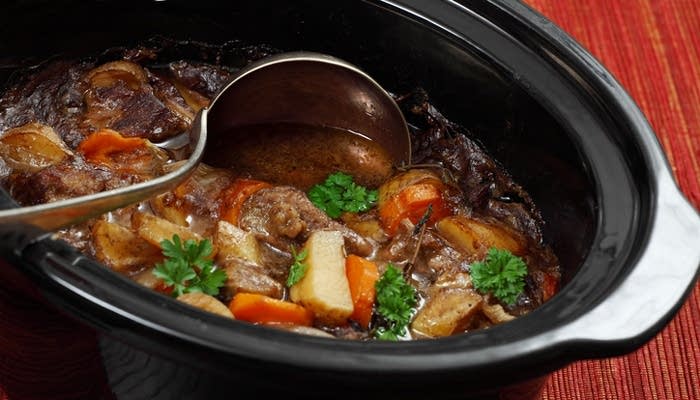 A phrase you hear a lot from people when discussing slow cookers is “set it and forget it.” It should be easy, right? Sadly, it’s not always that simple because not all slow cookers are created equal. America’s Test Kitchen recently tested eight slow cookers to find out which ones worked best and which ones left a hot mess. Lisa McManus is executive editor in charge of equipment testing at Cook’s Illustrated and Cook’s Country magazines. She joined our managing editor Sally Swift to talk about the results of their equipment review and gave us a mouth-watering recipe for Slow-Cooker Memphis-Style Wet Ribs.

Sally Swift: You wrote something about slow cookers that I must read aloud because I think you have just captured the fantasy. You wrote, “A slow cooker promises to be a little fantasy grandmother who sits in the kitchen all day cooking for you.” That's perfect.

SS: It's the expectation, but it's not always the case.

LM: Unfortunately not. If you have the wrong slow cooker – or not the greatest recipe – you can put stuff in there, but it doesn't come out the way you’re hoping.

SS: Tell us what we should be thinking about when we're going to buy a slow cooker.

LM: We've tested them a number of times and I just recently updated this with all new models. What we know we like is a good size capacity of at least six quarts.

LM: A little bit bigger is better because you want to be able to fit a whole recipe in there – plus leftovers are great – and six quarts is about the right size. We also like an oval cooker because you can fit larger roasts and things without crowding. You can have something in there that follows the contours of the cooker, instead of a round cooker. And we like having a glass lid. Believe it or not, there are some that don't have glass lids. You can't see what's going on in there. Then you're tempted to open it, and every time you open it you're losing a lot of heat and slowing down the whole process. You want to be able to leave it closed and check on it.

SS: Those all makes sense. The big problem with slow cookers is erratic heat. Is that still the case?

LM: Yes. One of the things we've found in the past is there would be hot spots. Or worse, they would keep heating up until they were boiling, boil the heck out of your food, and it's flavorless at the end of the day.

SS: So you took some apart?

LM: Yes. We tested eight different models. I bought a full set of them that I was going to dismantle. I wanted to know why are these different because from the outside they all look kind of similar.

SS: How did they heat?

LM: The most basic one is a metal housing on the outside, a ceramic pot that goes inside, a lid on the top; inside that metal housing it's usually hollow, but it has one thing in it which is like a belt that goes around the lower third of the cooker. That's what's inside your toaster, you know when you look down your toaster you see those little glowing wires. That's wrapped around this belt all the way around the cooker inside that housing. Those are the classic slow cookers with the ceramic insert.

But we found another type. They have a metal insert which is thin and lightweight. Instead of having that belt of wires that goes around it and heats it up gently from the outside, it sits on a metal hot plate. Those cooked, understandably, a lot faster. We kept finding, in those cases, that we had to check it early. People like them who can't wrestle with a giant ceramic pot, some of those are like eight pounds when empty.

LM: You want that ceramic because the density of the material slowly absorbs and transmits heat. That thick, heavy crock is valuable in the slow cooking, but it also means you're wrestling this big, fragile, heavy thing.

SS: There are some slow cookers with so many settings on them that I don't want to touch it because I have to get a manual every time I'm going to use it. Did you take that into consideration?

LM: We did. A bunch of them were a pain because there were so many buttons and it wasn't a logical layout on the display. You’d be done and thinking, “Okay, is it on?” That's a terrible feeling because we've had ones in the kitchen where you think you've set it, come back four hours later and nothing's happened.

SS: There was no dinner.

LM: Right. You go off for the day to work and you think “Yay! I'm going to have a nice hot dinner” and there's nothing but spoiled food you have to throw out. And our winner, every time people got to that one, they were like “Oh, look at that.” Bing, bing, bing, it’s on and it starts counting down right away so you can see that it's on.

SS: Which one was the winner?

There was one more to tell you about, it’s a "smart" slow cooker. It used an app on your phone to control it and we thought, “Oh yay, this is the future!” Except, it was ridiculous. You had to have the app to see anything. You couldn't walk by and say, “I've got three hours to go.” You had to fire up your phone and check it. Then sometimes it would jump around and you'd think, “Darn, I just turned it off.” That was not a good feeling.

SS: We want a grandmother in the kitchen in that case.

LM: Yeah, you want your grandma there. You know she's going to be there making your dinner. It's going to come out right. That's what you want and our winner gave that to us.

SS: I know you guys are constantly fooling around in the test kitchen. What are some of the more unusual things that you've figured out to make it a slow cooker?

LM: We have been able to make the most amazing monkey bread in the slow cooker. It acts as a proofing box and then it fully cooks the dough, so we take advantage of that warm moist heat. It's a recipe that's going to come out in our new cookbook this fall called The Complete Slow Cooker, and word is already out with the test kitchen that this is good stuff. We also make pad thai in the slow cooker. We braise the pork and then use the liquid to cook the noodles. We've made paella, layering the chicken with the rice and sausage. It gives you this amazing dish at the end of the day. We can do a lot of crazy but delicious things in there.

SS: Who needs a grandmother?

LM: Right. She's been replaced. She can go out and have a good time now and we all get dinner.