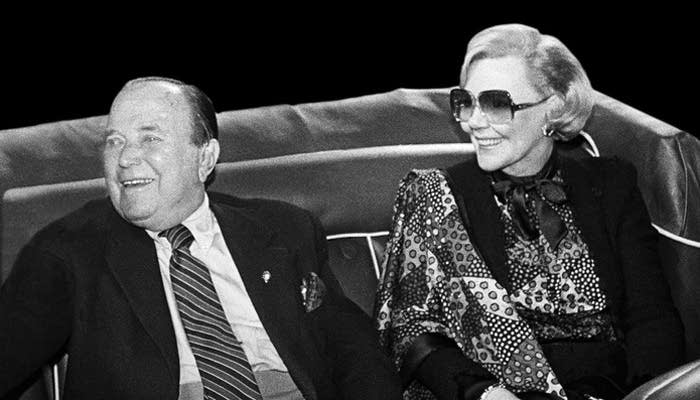 Ray Kroc turned a single San Bernardino burger stand into one of the world’s largest and enduring brands, while his wife and silent partner Joan Kroc became one of the country’s best know philanthropists. Contributor Russ Parsons talked with Lisa Napoli, author of the new book Ray & Joan: The Man Who Made the McDonald’s Fortune and the Woman Who Gave It All Away about the intriguing couple behind the golden arches.

Russ Parsons: There are so many fascinating angles to this couple, Ray and Joan Kroc, and the company that they built. What was is that attracted you to them?

Lisa Napoli: It wasn't because I was a McDonald's fan or eater. It was because of this curious sculpture in southern California that was in disrepair that it turns out Joan had anonymously funded years ago. That set me on the trail – besides the fact that you hear her name recited on public radio at least daily. I put two and two together – or wanted to put two and two together – to understand more about her. But to understand about her I had to know about her husband. And to understand about her husband I had to know about McDonald's. That consumed the last five years of my life.

RP: McDonald's usually gets credit for having created, or at least having perfected, the fast food model that's so prevalent today. What is it that they actually did differently? There were hamburger stands all over the United States. Why McDonald's? What did they bring to the game?

LN: What they did that the other hamburger stands didn't do is orchestrate, or choreograph, this hamburger dance that allowed the movement of food from creation to you and your mouth very quickly. That's what set them apart from others. There were other things like the creation of the golden arches which made McDonald's stand out on the roads, although other people were doing that too. It really was this efficient system, the “speedy system” they called it. Ray Kroc looked at this system and said, "Aha, that's it." He was a milkshake machine salesman and before that a paper cup salesman, so he'd been in hundreds of malt shops, fast food stands, and roadside food stands. He knew when he saw it that this was a super-efficient system. The food was pretty good too. It was locally sourced and prepared to very specific specifications. He didn't invent it, nor did he invent franchising. He just identified it and had the gumption to go out and shop it around.

RP: In a way, he was an archetypal American character of that period because he was an irresistible salesperson.

LN: Yes, he was a difficult guy. You either loved him or you hated him. This “hail fellow well met” type character that some people found very brusque. He liked to close the deal and he'd been very successful, so he didn't want to take “no” for an answer. The problem was he didn't have any business sense. But he did know how to close a deal, and that was what fired him up.

RP: The story of Ray and Joan Kroc reads like some kind of 1950s film noir plot, like something James M. Cain might have written. How did they meet and how did their relationship evolve?

LN: That's what I love about it, the mid-20th century flourishes all over this story. They met because of McDonald's. Ray was shopping around the Midwest the idea for McDonald's, selling franchises for $950 a pop. He walked into a very elegant restaurant in Saint Paul, Minnesota called The Criterion. He wanted to sell a franchise to the owner of that restaurant, who wanted to diversify. He was a good businessman; Jim Zien was his name. Jim had hired Joan Smith, a young, beautiful local talent to play organ in this restaurant and to entertain the diners. What I love about this, is that we think of going out to eat as something we've always done. But it was very unusual to go out and have an elegant meal. Certain people might have done it more often, but the regular folk didn't go out to these restaurants. There was a sense of elegance to this restaurant that set it apart. The fact that Ray walked in and saw this beautiful woman playing organ really excited him. From there, lots happened.

It’s important to point out that they were both married at the time. Interestingly, and not coincidentally, Joan's husband at the time suddenly became the manager of the McDonald's franchise that Ray sold to Joan's boss, and later got the right to own franchises himself. There were a lot of McDonald's restaurants in Ray and Joan’s early personal history – before they became a couple, because it took them about a dozen years before that happened.

RP: Franchise operations have come and gone. It's still a very popular way to structure a restaurant or operation, but few have had the staying power of McDonald's. What do you think was the key to their success?

LN: The key to their success, and Ray even said it, was thanks to a man named Harry Sonneborn, who'd come over from Tastee-Freez, another early iteration of these fast food stands. Harry Sonneborn had this idea. He said, "Ray, you are not in the hamburger business. You are in the real estate business." Harry, being a very wise business man, went out and negotiated loans in the developing suburban areas of America to buy land that had been unused. He convinced banks to provide the underwriting mortgages so that they could build these McDonald's from town to town. It was his idea that it be about the real estate, and that's what keeps McDonald's “McDonald’s” today. It's not the food. It's about the real estate and the business behind the franchising.

RP: McDonald's in the 1950s versus McDonald's today. Kroc’s idea was everything was extremely streamlined and efficient. Today, McDonald's sells breakfast, salads. It does almost anything that you want; it's almost a casual restaurant. What do you think he would think about McDonald's today?

LN: I try to wonder. I try to put myself in his head, and it's hard to know. I think that at a certain point it just transitioned into his being “Mr. McDonald's.” He was always a clean freak. I go into McDonald's sometimes to get coffee – which is the only thing I'll have there – and to use the bathrooms and the Wi-Fi. The bathrooms are sometimes horribly dirty. Ray would be appalled at that. I think it would be less about the food and more about how these places are run and staffed. He was all about customer service. Quality, service and value were his mantras. When you go back to the early days of McDonald's, the McDonald brothers had this brilliant idea to pare down a menu and make it as simple as possible. The idea was then you could pay attention to the food, and the food could be as fresh and local as possible. What you're seeing today is very different than what they wanted certainly, and even in many ways what Ray would've wanted.

Hungry for a burger now? Try the Les is More Burger, one of our favorite burger recipes.

Russ Parsons was the food editor and columnist of the Los Angeles Times for more than 25 years. He is the author of the cookbooks How to Read a French Fry and How to Pick a Peach. He is a member of the James Beard Foundation’s Who’s Who of Food and Beverage in America, and has won awards from the International Association of Culinary Professionals, the Association of Food Journalists and the James Beard Foundation.
Chicken Orzo
Macadamia-Crusted Delicata Squash with Maple Mustard Tahini Dressing
Lime Melting Moment Bars
Curried Cauliflower Cream Soup