Passion for cheesemaking takes a Cheese Girl around the world

by Lynne Rossetto Kasper
Listen: Passion for cheesemaking takes a Cheese Girl around the world
07:53 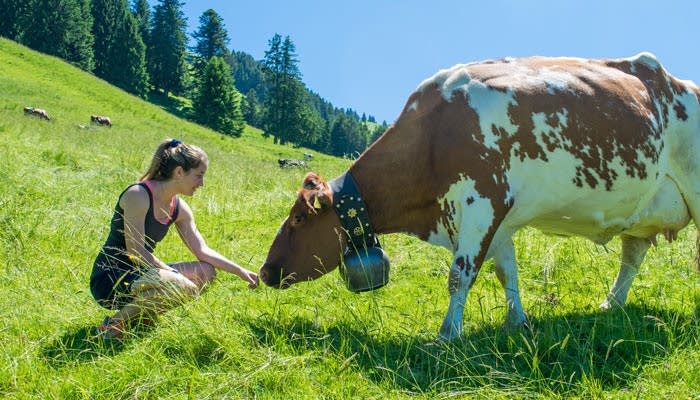 Linnea Burnham is a young cheesemonger who recently spent more than a year traveling the world to learn more about cheesemakers and the many diverse peoples that make cheese. She documents her travels in the blog Journeys of a Cheese Girl.

Lynne Rosetto Kasper: Where did this obsession – I hope that’s not an exaggeration – with cheese come from?

Linnea Burnham: My passion for cheese is a passion for home. That emerged from a passion in agriculture that I got from my grandfather, who used to raise Holstein cows. Some of my earliest memories are helping my grandfather take care of cows, feeding them hay and grain. When I was 16, I became a rotary student. I was put in Besançon, in eastern France, where they make a lot of cheese. That experience opened my eyes up to the world of cheese. I came home a year later, started working for cheesemakers in Vermont. Later on, in college, I started drawing all the connections between cheese and so many greater issues that interest me like the future of our agriculture.

LRK: When you started traveling though, fourteen months on the road with that knapsack, you picked some interesting places: Mongolia, Brazil, South Africa. First of all, why Mongolia?

LB: Mongolia fascinated me because I really wanted to go to a place that hadn’t been industrialized like the rest of the world. So much of cheese making history has been shaped by global markets, international pressures, or new technologies. But Mongolia is isolated and I wanted to see what cheese making might have been like – or as close as I could come to seeing what cheese making might have been like – 1,000 years ago. I ended up living with a family of nomadic herders in a yurt somewhere in the countryside, and I still don’t really know where I was because I don’t speak Mongolian, and I arrived by myself.

I was lucky because I met a woman in the capital who spoke English, and she told me that if I wanted to stay with her cousin’s cousins and make cheese, I could. When you get an offer like that, you don’t say “no.” After that, I got in a car, ended up at this yurt, and was making cheese. Making cheese there meant using soured horse milk to coagulate the cow milk. It meant making cheese over a fire, milking by hand, of course. I found that cheesemaking in Mongolia is tied to survival in a way that it isn’t in the rest of the world. First off, to make cheese in Mongolia you have to use all the resources that you have. They don’t have access to modern technologies. They don’t have access to industrial cultures, rennet, or these cheesemaking supplies that you can generally order online in other countries. The taste isn’t as important in cheese over there. It’s really about conserving the fat and the protein in milk, so that you can transport it and move with it as you’re migrating throughout the countryside.

LRK: It’s interesting. The soured horse milk as a coagulant, but is there an actual horse milk cheese?

LB: There is. I think few people realize how much of a “milk country” Mongolia is. They milk camels, horses, cows, sheep, goats, yaks; and they make cheese, or some dairy product, with all of these. Milk is a staple to their diet.

LRK: What did the cheese taste like? The one you were making…

LB: I have to say it’s not my favorite cheese. It’s the only cheese I’ve ever had that I almost broke a tooth on.

LB: I guess I should explain briefly how it’s made. Once you’ve coagulated the cheese with soured horse milk, they press it lightly overnight and then cut it into thin strips. They take these thin strips and string them with a needle and a thread. They hang them to dry on the walls of their yurt. The cheese dries out and becomes like a rock. You either eat it really slowly by sucking on it and trying to break it down in your mouth, which takes a very long time, or you dip it in a hot tea. It’s unusual, and I think it tastes really “animal.” You can taste the yurt; you can taste the yaks, or the cows, or the horses.

LRK: Tell me about Brazil.

LB: I flew from Brazil to Mongolia, that was probably the longest flight of my life. The reason I chose to go to Brazil was I wanted to see how cheesemaking traditions from Europe had been adapted to new places through colonization and imperialism. In Brazil, I’d heard about queijo da canastra, which is made in Minas Gerais, a region outside of Sao Paulo. It’s a region that’s all about cheese making. More than 300 years ago when the first Portuguese colonists arrived, they came to this region and they were looking for gold, and they were mining. But they started making cheese, and they’ve been doing it continuously since then. The other piece that’s really fascinating about Brazil is understanding Brazilian politics. In the 1950s, Brazil created legislation that outlawed the sale of all raw milk cheese outside of Minas Gerais, where it was produced. But, because this cheese has always been raw milk, and the farmers there don’t have the means to adopt modern technologies or comply with the legislation, they can’t legally sell their cheese. You have this really interesting situation with over 30,000 families who make cheese, and that’s their primary income, but they can’t legally sell it. I went to Brazil to understand these issues better and see how cheese making had been adapted to a tropical climate.

LRK: Is this sort of a black market product?

LB: That’s what they call it there. But it’s also a product of love. One of my favorite things about Brazil was finding the combination of queijo and guava. They called the two together “Romeo and Juliet.”

LRK: That’s a lovely idea. Speaking of lovely combinations, I’m thinking about the holidays. I always think of cheese as being something celebratory. Did you see any examples of it used in that way?

LB:Absolutely. In Norway, I went to a geitost festival. Geitost is a typical Norwegian cheese. It originated from this tiny village that was isolated by road until 1988, and I ended up kayaking there to this festival. Another great festival is the Gloucester cheese rolling that happens in England every year. It’s a race after a wheel of cheese down a very steep, steep slope. In Italy, every two years, there’s a festival called Cheese. The name says it all. It’s this tiny village that becomes inundated with cheese for four days, with cheesemakers from all over the world who pour in to showcase their cheese and it’s really a celebration of cultural diversity.

LRK: Of all the cheeses in this world that you have enjoyed, do you have a favorite?

LB:Cheese from Vermont will always be close to my heart. But one of my all-time favorite cheeses is this cheese made in France called comté. Again, it was the subject of my thesis research, and I lived there for a while -- it's kind of my home away from home. I think that comté cheese provides a model that gives me hope for the future of cheesemaking around the world. Because it's both the cheese that is rooted in place and made by small farms and small cheesemakers who are working together in cooperatives to make a cheese that is really high quality, but also exported all over the world. It tends to be a staple food, and not an elitist cheese.

Photos courtesy Linnea Burnham from Journeys of a Cheese Girl