The fascinating history and symbiotic relationship between figs and wasps

by Lynne Rossetto Kasper
Listen: The fascinating history and symbiotic relationship between figs and wasps
07:59 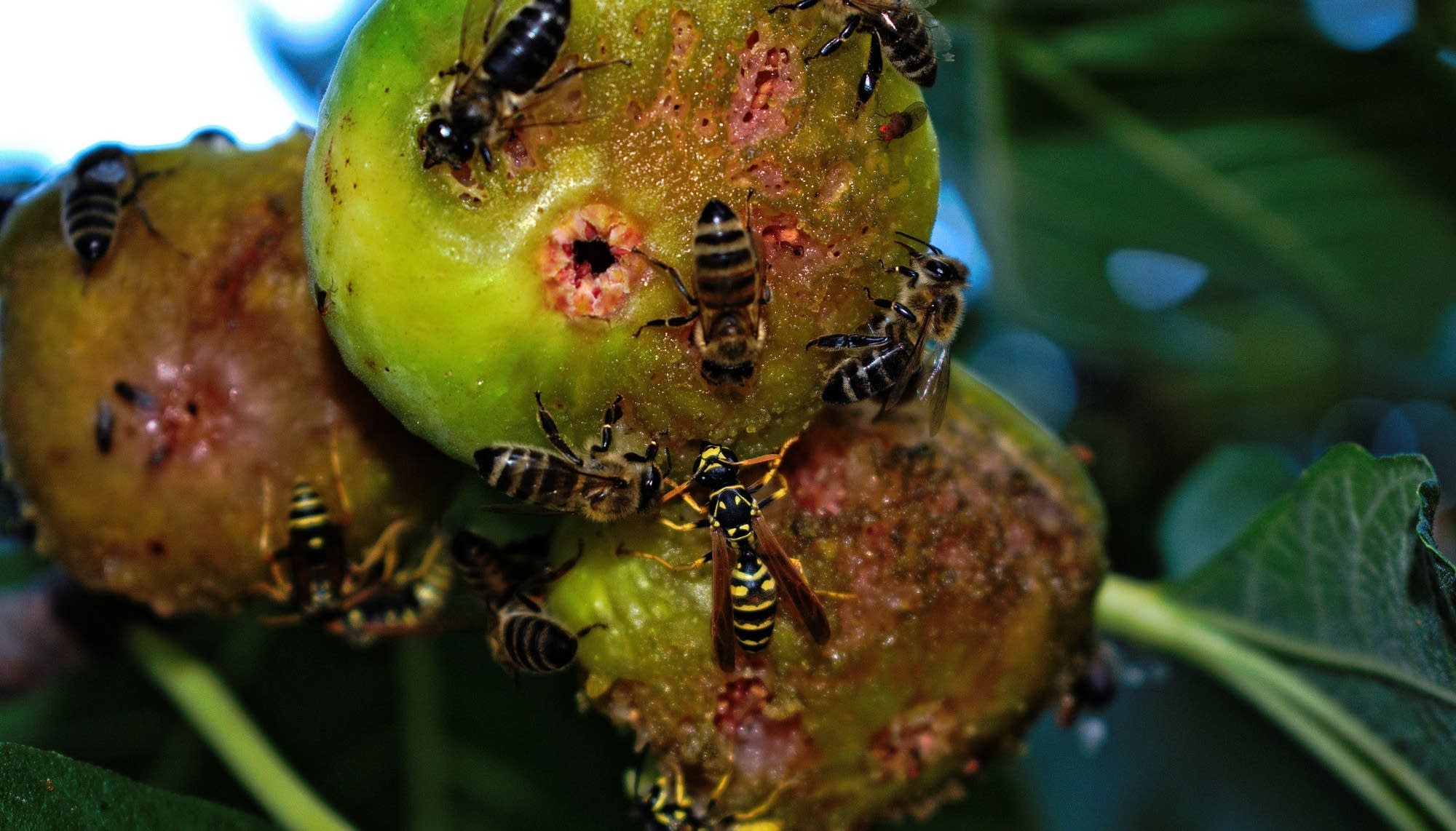 Lynne Rossetto Kasper: Some books have grabber titles. Then by maybe page 30, you realize that that title was the author's best effort. Not so with the recent book by Mike Shanahan. It's called Gods, Wasps and Stranglers: The Secret History and Redemptive Future of Fig Trees. Fig trees turn out to be fascinating. Mike, you have a doctorate in fig biology. Explain to me, what is fig biology?

Mike Shanahan: Well, I studied figs in a rain forest in Borneo for about a year-and-a-half. I was studying not just the fig trees, but also the animals that came and ate their figs and dispersed their seeds. Tied up in this is another set of animals, the wasps, that pollinate the figs. The study site where I worked had 75 different species of figs growing in it.

LRK: In one area?

LRK: What's the fascination with the fig?

MS: They're fascinating in terms of their biology. Each of the species – and there are about 750 different species of figs – each of them relies on its own kinds of wasps to pollinate its flowers. Wasps do this by entering the figs, which are really hollow balls. They find the flowers inside and they can only lay their eggs inside there. The fig relies totally on the wasp and the wasp totally depends on the fig for their reproduction.

LRK: The flowers are inside the fig?

MS: That's right. They're hidden away in a hollow ball. The only things that really should be getting inside there are the pollinator wasps.

LRK: What about the term "stranglers" in the title?

MS: Some of the fig trees are what we call strangler figs. They don't grow up from the ground like most plants. Instead, they start off in life high up on another tall tree, where their seed drops when a bird or a monkey or a bat passes by. Then they send their roots down the host tree into the ground. Slowly these roots that they send down also wrap around and embrace the host tree until, sometimes, the host tree dies away and you've got a hollow core inside.

LRK: How big do these things get?

MS: You can get strangler figs that are growing from 40 meters up in the rainforest canopy or even higher. They're also not just tall trees, they’re colossal in their shape and their form. Not only do they send these roots down the host tree, but they can send roots down from their branches creating this maze of branches and roots that form into this structure that is quite awesome to behold. And the biggest of these, the banyan trees, are capable of shading 20,000 people. Some of the largest ones are in India. They're huge. They keep on growing. As they grow bigger, their branches send out more of these roots that form pillars. It looks like there are lots of different trees there, but it's actually just one large tree.

LRK: Where do figs flourish?

MS: They're found all around the tropics and the subtropics. You find 100 species in Africa. There's about 500 species between India, Southeast Asia and Australia. They're even found in places like Hawaii, where they've been introduced. And in New Zealand where they've been introduced, and there's the domestic fig which is grown in more than 70 countries now. But, largely they're tropical species.

LRK: You say 80 million years ago is when the first figs were evident, or that there's evidence of them?

MS:80 million years ago is how long the relationship with their pollinator wasps has lasted. There may have been figs around before that, but what we know is that their relationship with their pollinators began that long ago. That's when there were still giant dinosaurs roaming around and when the continents that we have here today in the world weren't all in their current positions. They were all massed together in a big lump.

LRK: When the continents split, the figs moved. How did they become part of the people of the different cultures?

MS: I think that a long, long time ago when our ancestors were people wandering around hunting on a daily basis, the fig trees were pretty important. Not only as a source of food, but also as happy hunting grounds because these trees attract a huge number of animals that come and feed on them. It would be a logical move for any early humans to stake out these trees and find some meat as well as their figs to eat. But they've become central to cultures all around the world – in Africa, Asia, Latin America, and in the Pacific. People have developed taboos against chopping fig trees down. They say that they are abodes of spirits, places of prayer. They are featured in all of the major religions and in many of the less well-known cultural traditions around the world.

LRK: You tell a story in the book about a very tragic period in Kenya's history in Africa, when the Kenyans revolted against the British rulers. There was an extraordinarily violent war. But the fig tree played a role in this. Can you tell that story?

MS: It played several roles really. The fig tree in question was sacred to the Kikuyu people, who were the majority of the people in Kenya. It features in their origin story and it is a tree that people could use to commune with god. During the revolution against the British colonial forces there, one of the leaders of the rebels went out and prayed at his trees, his sacred fig trees, in order to give himself courage and strength. When the British found out about this, they used to stake out these fig trees waiting for him to come. Another one of these trees also served as a post office for the rebels. They had little nooks and crannies in the tree that they would use like a post office box system. Different people from different groups of rebels and friendly villagers would leave messages for each other and share intelligence that way.

LRK: Tell me about the "redemptive future" of the fig tree.

MS: What's special about figs is that they can produce their figs all year-round. That means they feed a huge number of animals in the rain forests. They feed at least 1,200 different species of birds and mammals around the world. These animals disperse the seeds of thousands of other species. By planting fig trees, you can encourage other things to come back and reforest areas that have been damaged by logging or by mining. This is happening around the world. It's happening in South America, in Africa, in Asia. People are using fig trees to encourage rain forests to reform where they've been cut down and damaged.

MS: The wasps are fairly vulnerable. As adults, they only live for about two days. In that two days they need to find a fig in which to lay their eggs. They have a little bit of vulnerability. In the laboratory, when people turned up the temperature on fig wasps, their life spans depleted very quickly. They looked like they were in big trouble in a warming world. But, actually, it may be that the fig wasps can cope with some of this climate change and global warming because they've experienced much warmer periods in the past. They can evolve fairly quickly because they have very short generation times. Also, the inside of the fig is a refuge from the heat. It can be several degrees cooler inside a fig than outside. That's where they spend most of their lives anyway.