Can you overcook a mushroom? America's Test Kitchen finds out. 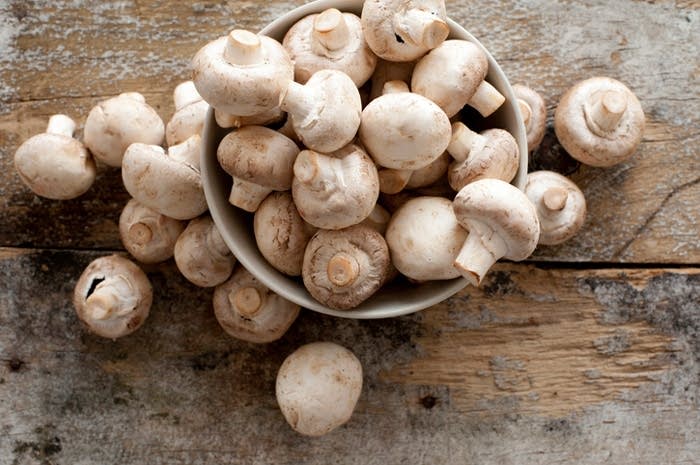 Molly Birnbaum, from America's Test Kitchen, turns her attention to mushrooms. She tells Sally Swift how these fungi bridge the gap between plant and animal, why fresh doesn't equal better flavor, and what happens to a mushroom after you cook it for 40 minutes. After learning more about mushrooms, try Molly's recipe for Stuffed Portobello Mushrooms.

Sally Swift: Molly, you say that you have mushrooms on your mind today?

Molly Birnbaum: I do. They are incredibly fascinating because mushrooms are neither plant nor animal. They belong to a totally different kingdom of organisms called fungi, which also contains yeasts and molds. Unlike plants, mushrooms don't produce chlorophyll for the conversion of sunlight into energy. They instead rely on decomposed organic material as a source of nutrients, which is exactly why they grow on the forest floor.

SS: What's the best way for us to store them at home?

MB: I like to make sure that they are completely dry. When mushrooms are wet and you put them in the fridge, especially if they're still in a package, they have a tendency to get slimy. We've done some work looking at what happens to mushrooms when you keep them in the fridge for a little while, specifically white button mushrooms.

When you buy that package, you put it in the fridge, you don't take it out for another week, and now the mushrooms have little blemishes. They don't look as pristine as they did when you bought them, and you end up throwing them out. We actually found that the blemished mushrooms you keep in the fridge for about a week are more flavorful than the ultra-fresh white button mushrooms.

SS: That is totally surprising. What a great tip.

MB: We tested that in the test kitchen by sautéing a couple batches of mushrooms: one fresh, and one showing signs of age. The results definitely surprised us, as we found that the older mushrooms had a deeper, earthier flavor and were substantially more mushroom-y than the unblemished specimens.

SS: Some recipes tell you to wipe the mushroom with a damp paper towel or brush. What is the right way to clean a mushroom?

MB: Some people say never wash mushrooms, just wipe them off. It's good to think about the fact that mushrooms grow in damp forests, where it rains all the time. It is not a bad thing to wash mushrooms at all. You just really want be careful not to overdo it, because they can soak up the water and become soggy. They are covered in water-repelling proteins called hydrophobins, so they're not going to soak up water if you quickly dunk them in a tub of water.

SS: It was worth talking to you just for that piece of information. Let's talk about cooking them. What is it that we need to know about them to make the most of them?

MB: Mushrooms are often referred to as the meat of the vegetable world, and that's for a good reason. Cell walls in plants are made from cellulose, and the membranes in animal cells contain proteins. The cell walls of mushrooms are made from something called chitin, which is a polymer composed of a nitrogen containing sugar. That's important because chitin is chemically related to both cellulose and proteins. In that sense, it bridges the gap between plants and animals. Chitin is the same material that is found in the shells of crustaceans, like lobsters and shrimp.

MB: The first time I heard that I had a hard time believing it. It's mixed with other things in those hard shells, but it is essentially the same material.

When it comes to cooking, the most important thing to know is that chitin is very heat stable. That means when you cook mushrooms, they're not going to get soft and mushy. They're going to retain their firm and chewy texture.

SS: They're actually a great ingredient for a rookie cook to take on, because it sounds like you can cook them to death and they'll never die.

MB: It's true. We did an experiment in the test kitchen with my colleague, Dan Souza, to show exactly that about mushrooms. We took portobello mushroom, beef tenderloin, and zucchini, then cut them up into the same size pieces. We then took a Dutch oven and a little water, brought it to a boil, put a steamer basket in there, put those three samples in the steamer basket, covered it, and started to cook them.

Every five minutes we took out the samples and tested them in a machine called the texture analyzer, which measures the force that it takes to compress each thing. You get data on how tough something is or how soft something is. What we found is that after five minutes of cooking, the tenderloin started to get a little bit tender. The mushroom also got a little bit tender, as did the zucchini. Every five minutes thereafter, for 40 total minutes of cooking, they all changed pretty drastically except for the mushroom. The tenderloin got incredibly tough. In the end, we calculated that it became 293% tougher, whereas the zucchini got incredibly soft. It was 83% softer.

The mushroom stayed pretty much the same.  It got a little bit tougher, but just 57%, which compared to the other stuff is not much at all. It was good at the end of the 40 minutes of cooking; you can't overcook it.