Zhug and how to make it

by Lynne Rossetto Kasper
Listen: Zhug and how to make it
06:22 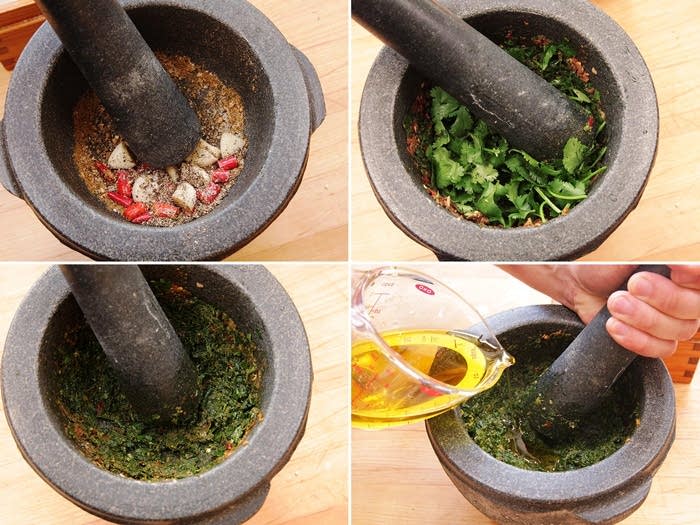 Some are calling zhug the new Sriracha, but what is it? Serious Eats' J. Kenji Lopez-Alt answers that question for Lynne Rossetto Kasper, and advises you to get out your mortar and pestle.

Lynne Rossetto Kasper: Tell me about this sauce.

J. Kenji Lopez-Alt: It's a Yemenite sauce, and I learned about it from my good friend, Einat Admony, who is the Israeli chef of a couple of restaurants in New York: the Taïm falafel restaurant, Balaboosta, and a couple of others. It's one of the sauces they serve with her falafel, and the way she spells it is “s'rug.” I've seen it spelled with "k" and with "ch" or with "z," and I think it's "zhrug" or "zhug." It’s one of those sounds that is really difficult for non-natives to say, but it's a really delicious sauce.

It's very similar to sort of like a Spanish-style salsa verde or a chimichurri, so one of those sauces that's really packed with fresh herbs and emulsified with olive oil and other spices. You make it by pounding together cilantro and parsley with a little bit of cardamom, a little bit of coriander seed, and some hot chilies, and you pound them all together in a mortar and pestle, then emulsify it all with really good olive oil. It’s sort of a really fresh take on a hot sauce.

LRK: Is it equal parts of cilantro and parsley?

JKLA: Yeah. I use the recipe more as sort of a guideline than a strict set of rules. It's one of those recipes where, as long as you've got the main ingredients, you can do equal parts parsley and cilantro. But, if you have only half a bunch of cilantro lying around and a whole bunch of parsley, then it's fine to go heavier on one versus the other. You just want a mix of herbs and plenty of heat. That heat is the real key element.

LRK: The unusual thing to me is the use of the cardamom. It is such a sweet spice, and I've not seen it used very much in the Middle East. Is it just that I've missed it?

JKLA: It's not super uncommon, and in this case, we're talking black cardamom. You know, cardamom is one of those spices that's sort of like cloves or cinnamon. It has the power to potentially overwhelm everything else. You want to be really careful with it, using only a very little bit compared to the other ingredients. To me, cardamom almost tastes soapy, but I don't mean that in a bad way; sort of a potpourri-style aroma that you get in the very background, and you really want to be subtle with it.

The real key to this sauce is the use of the mortar and pestle. It's tempting because you have all these moist ingredients that you're essentially chopping up, and it's tempting to want to pull out the food processor and throw it all in there.

But me and some other folks, we've done a lot of these side-by-side taste tests, blind taste tests, and have found that you get way, way, way more flavor out of a mortar and pestle that you do out of chopping the same exact ingredients in a food processor. The reason being that, once you get those fresh herbs and chilies in there with a little bit of salt, the salt acts as an abrasive. You're really crushing the plant cells and releasing a lot more of the sort of volatile aromatics than you would be when you just chop them. If you think about it, it's like crushing a grape versus slicing it up. You're going to get a lot more of the interior of the grape to release its volatiles by crushing it than you do by slicing it. The same is the case on a much smaller scale for a sauce like this or a pesto or a chimichurri, anything like that.

LRK: I have a Mexican mortar and pestle.

LRK: And I grind spices in it, and, really, it can happen so quickly, and the aroma is just incredible. But let's talk about what to look for.

JKLA: For kitchen use, I like to have a nice big one, because it's a lot more adaptable, and it lets you make bigger recipes. With something like this sauce, you start out with several handfuls of fresh herbs. You need that volume at the beginning to really pound them down. Similarly, I use mine to make guacamole and things like that, and I really like having the volume.

There are different styles from all around the world. It's a traditional tool in many cultures. The one I prefer to use is a granite Thai mortar and pestle, which is a good balance between size and weight and durability. It has a sort of pebbly, sandy-textured interior, and that really helps with grinding.

I really think it's one of the most underrated kitchen tools, because we have our electric spice grinders, and we have food processors. I have both those tools at home, but I very, very rarely pull out the electric spice grinder, because most recipes I'm working with are going to call for maybe a tablespoon or a teaspoon of dried spices. To pull out the electric spice grinder and have to clean it just for that small amount of spices, to me, it ends up taking more time than just grinding it really quickly in the mortar and pestle. Plus, you get more flavor out of the mortar and pestle.