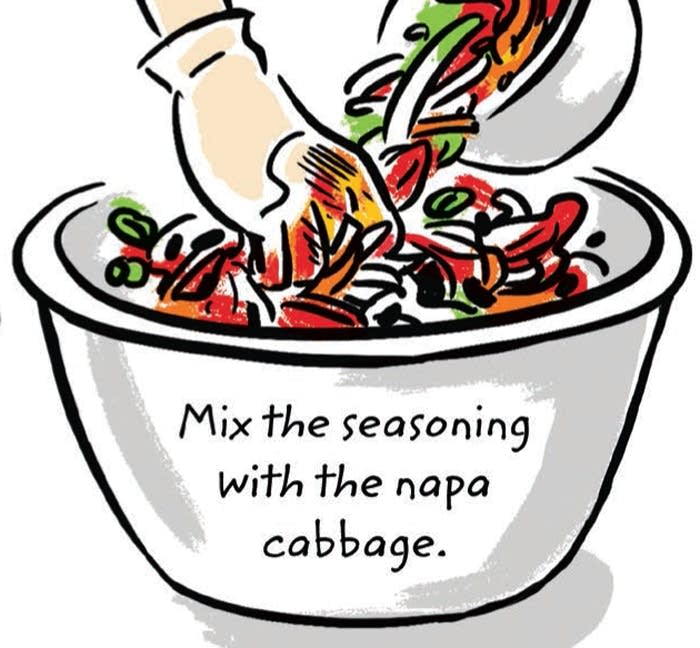 You're not likely to find a more visually creative cookbook than Robin Ha's Cook Korean!: A Comic Book with Recipes, in which she illustrates the recipes for her favorite Korean dishes. She tells Lynne Rossetto Kasper about the role comics play in her culture, the seven key ingredients in Korean food, and the "magic" of gochujang.

Lynne Rossetto Kasper: So, how did you come to doing comics?

Robin Ha: I've been reading comics ever since I could read words. I remember the first comic I read was introduced by my mother. She was an avid Korean comic fan ever since she was a little girl, and she gave me her favorite comics to read when I was six or seven, and ever since then, I never stopped reading comics. I loved it so much that I couldn't think of anything else to do with my life other than writing and drawing comics.

LRK: In Korea, are comics treated differently than they are here?

RH: Very much, yeah. In Korea and Japan, we treat comics just like any other entertainment, so it's very widely read. It's not just for little kids, or it's not just superheroes. Comics tell a story about anything, just like film or books.

RH: There are Korean red chili flakes, soybean paste, toasted sesame seed, fish sauce, sesame oil, soy sauce, and the red chili paste. A lot of these things you can actually get from regular grocery shops, but the only thing that I really think is very important in making Korean cuisine, and you might have a hard time finding in a regular store, is the red chili paste, which we call gochujang. It's a red, kind of sweet and very spicy, fermented paste. It has a consistency similar to soybean paste, but it's very spicy, and we put it in everything. I think it's just a very versatile condiment to have in your pantry.

LRK: I have to confess I have it in my pantry.

LRK: And it's replacing salsa and certainly ketchup.

RH: Yeah. Also, you can even mix it with ketchup. I've done that for fusion food, and, seriously, it's a magic sauce. You can put it anywhere you want, and it will work.

LRK: And it comes in generous tubs, which I like because there's a lot of it there.

RH: And it lasts forever.

LRK: Now, let's talk about something else I like in the beginning of the book, where you show us how a Korean meal looks and a guide to it. If we wanted to do a Korean dinner, what would the table look like, and how would we eat it and serve it?

RH: Korean people eat in a family-style way. So, other than a bowl of rice and maybe a watery soup, everything else is shared with other people. The shared little side dishes are called banchan, and this whole book actually started from a blog that I started, called "Banchan in 2 Pages." So, banchan is very, very easy and usually very quick to make, and they last a long time. You can put it in the refrigerator if there's any leftover. So, you just take it out every meal, and every Korean meal--breakfast, lunch, dinner--is pretty much the same thing.

We don't really have breakfast or dinner. We kind of eat the same food every meal. The three things you see on any Korean dinner table will be rice, some kind of soup, and kimchi. So, if you have those three things, it's complete as a meal, but you can go crazy and very elaborate and have a grill, which is kalbi or bulgogi.

LRK: What is that? Is that grilled meat?

RH: Yeah. Kalbi can be any meat. People usually think kalbi is beef, and that's the most popular dish in America, I guess. In Korean cuisine, kalbi just means "rib." Dwaeji kalbi is pork. You can have dak kalbi, which is chicken. So, any meat just smothered in a similar type of sauce, which is garlic and soy sauce and sake, like mirin. It's the same kind of sauce, but you just put in a different meat, and you grill it.

RH: Oh, there's so many. We make a lot of cold dishes that are extremely cold, and they're savory, served with, actual chunks of ice in it to make it last as a cold dish throughout the meal.

My favorite dish to make is bibim guksu, which is so quick. You can make it in, like, five minutes, and it tastes great. Basically, you cook the angel hair-size wheat noodle. We call it guksu or makguksu. You can find it at any grocery shop these days, and then you just pile on all kind of salad and kimchi, and you make this sauce with gochujang, the red chili paste, and sugar, and kimchi juice from the jar. You mix in a little bit of fruit of your choice. I mean, I usually mix a little bit of, basically, apple sauce in it to make it sweeter, but not like, sugar sweet. It's more like the refreshing sweet. Then you just mix everything together and it just tastes great. You can add a boiled egg on top for protein.

LRK: Just in case you want a bit of protein.

RH: Yeah, exactly, but without it is fine.