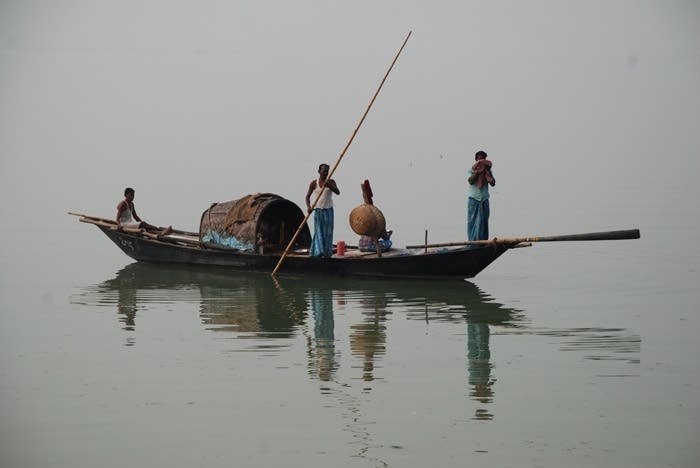 Polar explorer and adventurer Ann Bancroft's latest project is "Access Water," a world-spanning journey that looks to document the world's fresh water shortage. She recently returned from a trip down India's Ganges River, and shared her experiences with Lynne Rossetto Kasper.

Lynne Rossetto Kasper: The project is “Access Water.” Explain what this is about.

Ann Bancroft: I’ll try to do it succinctly. It’s a 14-year project. I’m still working with Liv Arnesen from Norway. We’re still working together--we’re coming into our 18th year. We have invited six women from six continents to join us: young women, who have a passion to do good in the world. We go from continent to continent every other year on a different waterway, talking to young people and beyond about water all over the world, and what we can do to protect and enhance our fresh water around the globe.

LRK: So the first trip you did last year was to the Ganges in India. You were in the Himalayas, at the glacier where that river began. And then you followed that river to its end, right?

AB: Yes, to the sea. “The mother Gunga” is what they call it. It’s the heart of India. So, we’re up in the Himalayas, and we start at the glacier, which is receding, and you can see that. You can see the marks on the rock of where that glacier has receded, some three meters since the ‘60s, and that’s alarming in and of itself.  Then we drink the water. I never imagined I would ever drink the Ganges when I did all my research for this journey.

Then, we hike.  We’re hiking because you can’t navigate this in any kind of craft. Then we get down to a place where it’s whitewater, and we hop in rafts, shoot the rapids, and swim the Ganges, which was incredibly cold and pristine.

Things start to change when the river starts to widen out into the plains. That’s where you start to really see the pollution. The river is very braided right after the monsoon in November and December, and we’re trying to find the main channel all the time. Oftentimes we have to get out of our boats and push off of sandbars, which we did not want to do, especially when we could see the squalid water. And we just continue on this way: We visited villages, schools, universities, industries, all along the river, learning and listening and taking it all in. The river has many, many personalities.

LRK: One of the things that you talk about on the site is how the Ganges has religious meaning to India.

LRK: And older people do not see that it might be polluted, that you probably shouldn’t drink the water. Is that the prevalent attitude still, or is that changing?

AB: It’s trying to change. It’s really difficult because I think it’s bedrock-ed in religion. They believe the mother Gunga will replenish itself, because rivers tend to, without huge stresses of population. They did purify themselves. That no longer exists. When economies and populations grow, so does our growth of water needs. And of course, if you live upriver, you sometimes don’t experience what you’ve done because--

LRK: It’s all going down.

AB: It’s down on the next village. And the monsoons, too, play a role in that, because they flush the garbage and the carcasses or whatever it is, downriver. There is that appearance of a cleansing. Young people are trying to make changes. They’re getting educated. They’re paying attention. They’re tapped in to the rest of the world for the same reasons we are.

AB: It is pretty true in India, and it’s true all over the world. It’s why we selected an all-women’s team--to really call attention to some of those issues around gender and roles. Girls, for instance, not staying in school because of lack of water and sanitary conditions when they get to adolescence. We want to talk about those things that intersect, and that’s the lovely part about water being this huge umbrella of a topic.

When we were on the river, when you would pull to the shore, the women would hang back. In this society, it’s very male dominated. We utilized our power as foreign women, and it took us some time to learn that we had this power, to suggest that we would like to visit with the women as well. If we requested it, we could sort of break those rules gently. Because we were different.

LRK: Were the women receptive?

AB: Very receptive. They’re very shy, very anxious to talk when no men were around.

LRK: So, do you think change is going to come about? What is the aftermath of something like this?

AB: It happens in lots of different ways. And really, we are about engagement. I think there are several examples.

One was when we were having a discussion, and there were some politicians and some business leaders brought before us to show us what they were doing in their community. They were in a big city, but they were sort of a very economically poor suburb. They were trying to pick up trash, and have these small initiatives. When we departed, they said, “If you came so far to travel our river, and to care about our river, and to try to understand the issues, both good and bad, around our river, we too should care.”

When we hopped in our boats and said goodbye - I have this photograph, it’s giving me chills - the entire village is along the shoreline. They’re waving goodbye to us after we’ve had this emotional, wonderful day, these warm people who have fed us and embraced us, and knew nothing of us. This wasn’t planned. Then they yelled out, the ones who could speak English, “Post this on Facebook!” I just thought, “You know, this is really what it’s about.” It doesn’t always have to be these really complex initiatives. We have tremendous power as individual citizens.