What you need to know about aperitivo

by Shauna Sever
Listen: What you need to know about aperitivo
08:26 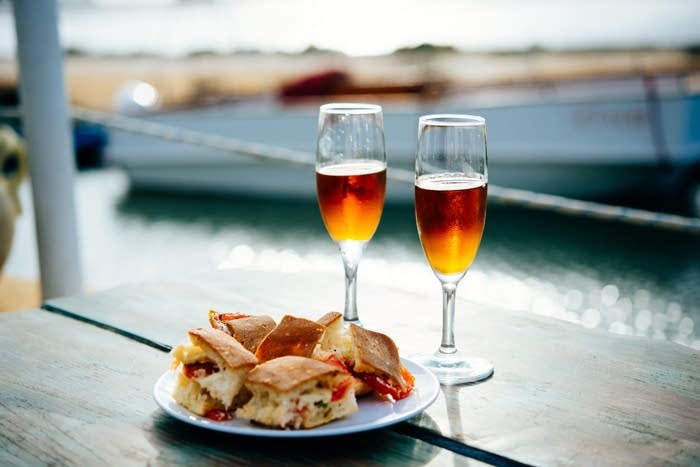 Aperitivo is northern Italy's version of happy hour, only instead of half-priced beers and a sketchy taco bar, light drinks and small plates carry the day. Marisa Huff writes about these cocktails and appetizers in the aptly-titled Aperitivo: The Cocktail Culture of Italy, and speaks with Splendid Table contributor Shauna Sever about them.

Shauna Sever: For the uninitiated, can you paint us a picture of this lovely Italian tradition of aperitivo?

Marisa Huff: Of course. It is a very special moment of the day. When the day comes to a close, let's say around 6:00 P.M. to 7:00 P.M., and through about 8 P.M. to 9 P.M. in the evenings, Italians will walk over to their local bar or cafe, meet up with friends, and sip on a fairly light cocktail, perhaps a glass of wine or a beer, and have a little bar snack to go along with that. And the point of this is really winding down, talking with friends, and enjoying the moment. Something very Italian.

SS: Now, how does this differ from the American happy hour?

MH: Well, it's not about dollar tacos and getting drunk, that's for sure. It's strange, in places like Milan, you may end up paying more for your cocktail during the aperitivo time. The idea behind that is, it's going to be prepared in a very beautiful way, hopefully with top quality ingredients.

Together with it, you're likely to be served food that might come in the form of small plates, or if not, something over the past 15 years that's really developed is a buffet of different foods.

SS: That sounds great. The book also makes mention of the fact that aperitivo is primarily a northern Italian tradition. Why is that?

MH: I think that, in general, northern Italians drink more; they're more accustomed to drinking alcohol. In southern Italy, of course, people drink wine with meals, but they don't necessarily get together to have something else ahead of their meal, whether it be lunch or dinner.

Also, a number of ingredients that go into these cocktails were produced for the first time in northern Italy, so I can reference Vermouth, which is from Turin and the surrounding area. Campari, which comes from Milan. Products like Aperol, that are from Padua. Campari and Aperol are considered bitters. Vermouth is a sweeter ingredient, but they're all coming from northern Italy, where people traditionally drink those and enjoy them before meals.

SS: Now, within that region of northern Italy, you go even further to be specific about the type of aperitivo that's found, and those differences in the drinks and food are surprisingly distinct. Can you tell us about the different aperitivo scenarios in each city?

MH: In Venice, for example, you will find a tradition that is based on bar hopping, and you go from one wine bar, which they refer to as “bacari,” to another, where you will stop and probably have just a small glass of wine, which they refer to as an “ombra,” which is the Italian word for shadow. You might also pick up a cicchetto, which is the equivalent of Spanish tapas done Venetian style; baccala mantecato, which is whipped stock fish, possibly served on polenta; or even something as simple as a crostino, a piece of toasted bread with something delicious on top.

In terms of the drink specifically, you'll find that they vary even from city to city within the same region. So, in the Veneto region, the spritz is quite popular, which is white wine or Prosecco, soda, and normally a bitter component, which could be Campari or Aperol, most commonly.

In the town of Padua, where I'm living, Aperol's all over the place. It was created there, and it's also what the college kids are loving to drink. Padua's a university town, and come evening time, these students pour into the piazzas, especially in the summer when the weather is nice. You'll find them sipping on a spritz. Oftentimes that might cost even less than a glass of water, so they will go through a couple of them. They're light enough that they aren't going to get drunk; they're there to just enjoy time with their friends.

Talking about the spritz, in Venice, the locals are drinking a version made with Select, which is a red bitter, similar to Campari, but less strong in alcohol. Up in Trieste, near the border with Slovenia, spritz is served "bianco," so just wine and soda water. No bitter component whatsoever, and it's always garnished with a lemon. Up in the mountains, in the Dolomites, you'll find something called a Hugo, where they add an elderflower syrup to it and serve that with mint. So, there are regional variations on even a single drink, not just the aperitivo as a whole. They're that specific.

SS: Tell us about the role that food plays in the aperitivo experience?

MH: We often say that Italians drink when they eat and eat when they drink, so the food is really a very important part of the aperitivo experience.  That is also something that is very regionally driven. In a place like Venice, you will find fresh fish like sardines, fried beautifully and maybe served with a light sauce. I have a recipe here for salsa ruggine, which is like a rust sauce, slightly spicy and pairs beautifully with a fried sardine.

Other places like Milan, you'll find that they may use their leftover risotto alla Milanese.  So, a soft, round risotto, pan-fried into basically a little, crispy pancake--Risotto al Salto. Absolutely beautiful, something that's so easy, you can do it at home.

And then, ubiquitous across northern Italy, you'll find tramezzini, these small tea sandwiches made with what looks like Wonder Bread, but has actually only a few beautiful ingredients. It's white bread with the crusts cut off, cut into triangles, and stuffed with a variety of different ingredients. It could be prosciutto or mushrooms. I include a recipe for a carbonara tramezzino that I tasted for the first time in Padua and, seriously, it's addictive. It's an Italian egg salad made with crispy guanciale and pecorino cheese, so what's not to love?

SS: That all sounds absolutely delicious. Say we wanted to invite friends over and make this a reality here. What are the key components to have on hand?

MH: It really is simple. You can go out and purchase a bottle of sweet Italian Vermouth, purchase a bottle of Campari, and you have the beginning of a variety of cocktails. You mix those two ingredients and you have something called a MiTo, a Milano Torino. You add soda water and it becomes an Americano. In place of the soda water, add gin and it's a Negroni. You add Prosecco instead of gin, it becomes the Negroni Sbagliato. You can even add beer, froth beer, and make it a Beer Americano.

In terms of the food, you can make a crostini spread. Toast sliced bread, preferably something like a baguette, and top it with a number of different ingredients. Should that seem already like too much work, open a bag of potato chips and pull out some olives and you can consider that an aperitivo. The spirit is about getting together and not stressing out about inviting friends over for a special moment during the day.