Non-dairy milks are versatile and easy to make

by Noelle Carter
Listen: Non-dairy milks are versatile and easy to make
07:16 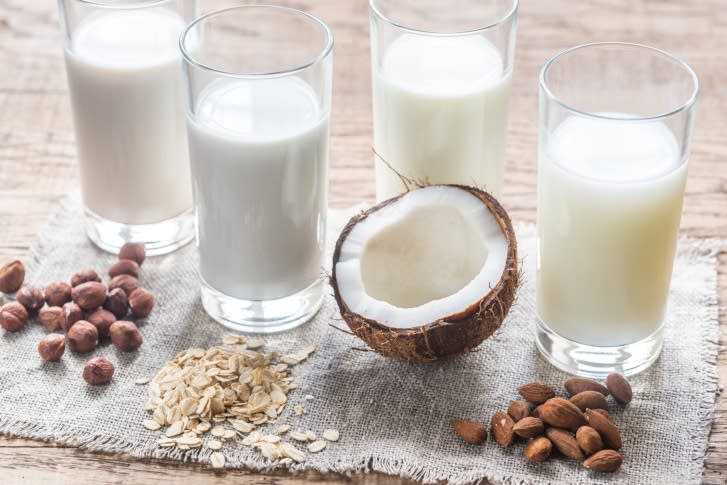 Did you know you can make non-dairy milk from ingredients like coconuts, oats or even tiger nuts? "They're really, really easy to make -- especially the nut, seed and tuber milks," says Dina Cheney, author of The New Milks.

Noelle Carter: When you think non-dairy milks, many of us think of almond or other nut-based milks. But there are so many other vegan alternatives. Could you tell me a little about the various options available, and the differences between each?

Dina Cheney: The main types are coconut, legume (primarily soy), nut, seed, grain and even tuber. There are all different kinds.

Coconut milk, many people are familiar with, but when you make it yourself, it's a real revelation. It's rich, thick and creamy; it just tastes amazing. It's very versatile, and also really good for dessert recipes like vegan ice cream.

Then you have tuber milks like tiger nut, which is just naturally really sweet and creamy, also a little high in fat, and wonderful.

The legume milks -- especially soy milk, the most common one -- are very high in protein and calcium. They're very versatile. They're really the most similar to cow's milk.

Then you have the nut milks. Everyone knows almond milk, but you can also make pecan milk, pistachio and macadamia nut milk. They really vary. They all tend to taste great and be very, very low in sugar. They're very, very good for you.

The seed milks are rich in omega-3 and omega-6 fatty acids. They're also really good for people with allergies.

We have the grain milks, which I might not have covered before. Most people are familiar with rice milk, which has been popular in this country since the '70s. But why stop with rice? You can make millet milk, barley milk, kamut milk and oat milk. The grain milks tend to taste really good. Also, many of them are good for people with allergies as well.

How to make non-dairy milk

DC: I make my own milks a couple times a week, but I also buy them. I am an advocate of both homemade and purchased.

The really big difference is that when you make your own milks, you have complete control over exactly what's in the milk. When I make my own milks, I really just put in the solid ingredient, like almonds or coconut, and water. I don't add anything else. I have total control. I know it's organic, there's no sweetener in it, there are no stabilizers. That's really the main thing. You can control the content and the consistency. You can also make some wacky varieties that you can't find in stores.

The store-bought milks, usually they have additives, stabilizers, different ingredients like gums, lecithin and carrageenan, in some cases, which emulsify the milks so that the ingredients don't separate. You don't have to shake the milk. When you make homemade milks, you really need to shake them before you use them.

When I make them at home, I tend to use a higher ratio of the solid ingredient to water. If I'm making almond milk, I'll usually use 1 cup of almonds and 3 cups of water. With the packaged milks, they use a much higher ratio of water to solid, so there aren't generally as many nutrients. That said, many of the packaged products are fortified to make up for that difference.

NC: Are they hard to make? Do I need any special equipment?

Let's say it's almond milk. You soak the almonds in water overnight. The next morning, you just rinse and drain, which takes two seconds, throw them in a blender with some fresh water, blend for about a minute, and then strain. Voila, you have almond milk. It takes five minutes of active time to make almond milk. It's good to soak overnight, so you have to plan in advance, but it's so easy.

The tuber milk is the same as the nut milk. You soak overnight for tiger nut milk, and it's the same process.

Soy milk and grain milk you do need to soak overnight, and then you need to cook the grains or the legumes before you blend them with water and strain. The grain milks and the legume milks take slightly more time. But that said, they're really all very easy to make and very basic in terms of the equipment that you need.

DC: Absolutely. I never throw away the solids. I usually do strain my milks because I like to have the consistency be similar to store-bought milk. But I pretty much always keep my solids.

I will either keep them wet after straining, then just add them to smoothies or to oatmeal, pancake batter or quick bread batter. Or, all you do is pour them onto a parchment-lined baking sheet in a low oven at 250 degrees Fahrenheit and bake for about two hours so that the mixture dries out. Then run it through a food processor, pulse it, and then you have homemade almond flour, hemp seed flour. This stuff is expensive. If you want to buy almond flour at the store, some of these flours can be $13 for one small package. Then you get the fiber; you're getting all the nutrients from the solid ingredients.

NC: If I'm baking or cooking, if a recipe calls for milk, do I have to worry about what sort of non-dairy alternative I use? Is there any guideline that I should keep in mind for substitutions?

DC: You can use plant-based milks and dairy milk interchangeably. You absolutely can. The only thing I would say is that some, like rice milk, are pretty thin. You want to think about consistency.

Let's say you're making crepes. Rice milk would be great because crepe batter is thin, but if you need a thicker milk, you might want to go for coconut milk. With cooking, if you want to make a cream sauce, I wouldn't use oat milk or rice milk because they're thinner and oat milk is sweet. I would use cashew milk because cashew milk is creamy, rich and neutral in flavor. You want to make sure you match the consistency and the flavor of the plant-based milk with your recipe.