Upside-down pizza and the evolving cuisine of Rome

by Rebecca Sheir
Listen: Upside-down pizza and the evolving cuisine of Rome
08:20 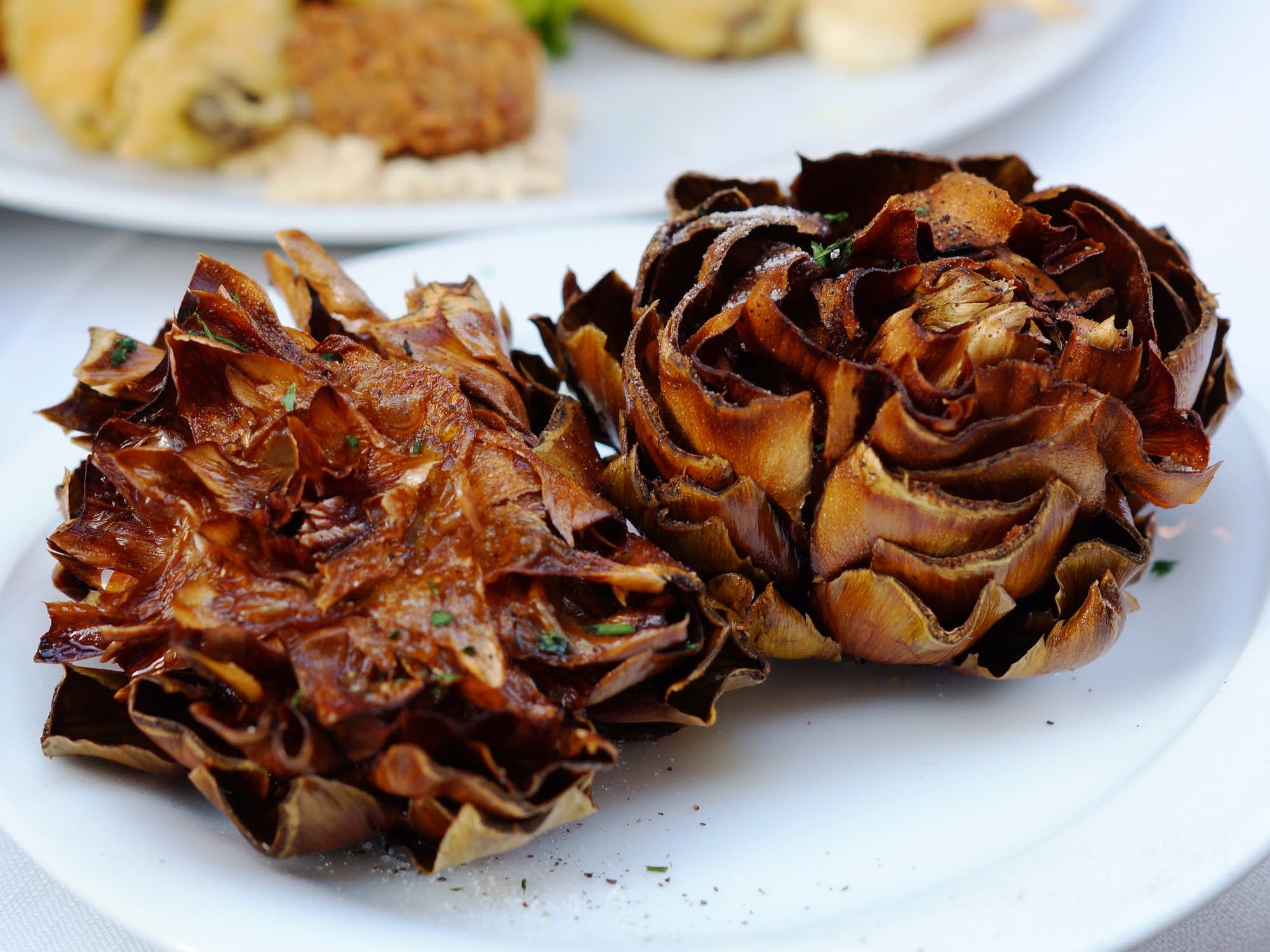 Katie Parla: It's definitely a set of dishes -- Jewish and non -- that reflect the geography and the territory of Rome and its environs. It's salt driven. It's pecorino laced. (Pecorino is this really salty sheep's-milk cheese). It's pasta, offal and vegetable based. It's a cuisine that can still be found on home and restaurant tables.

I would note that it is evolving like all cuisines. Some things that were perhaps the cornerstone of the local table even a few decades ago are losing prominence as the city's cuisine develops.

RS: Give us an example or two.

KP: This is one of the things that I really love exploring. There are so many dishes that even 10 years ago would have been protagonists in the traditional Roman meal, but for a variety of economic reasons, for convenience reasons, the way that people eat has changed.

There are things like skate and broccoli soup, a labor-intensive soup often consumed on Fridays, that are on the verge of vanishing from the local table. There are only a couple of places that I can even think of in Rome that make garofolato, which is this pot roast that is simmered with tomato and cloves. It's super spiced. Or even simmered beef like beef brisket -- really deeply simmered meat that breaks down so it's super tender -- those used to be heavily featured on menus.

Vegetables from all over the world or meat cuts that were previously inaccessible are now cheap and easy to get. The availability of products  in some ways diluted the local cuisine. Although I would say that there is a cucina Romana or classic Roman cuisine that survives in places.

RS: It's being more or less retooled as the years go by.

One of my favorite places to eat in Rome is this little stall in the Testaccio market. Even just three years ago you couldn't go and get a really delicious sandwich at a market. You went to the market for raw materials. But now as people start to go to supermarkets, some market vendors have transitioned their butcher licenses into food service licenses.

This place called Mordi e Vai, you go and get Roman main courses, whether it's simmered brisket, tripe or tongue on a sandwich. What they are doing is they are giving you a super economical, very convenient Roman dish in portable form that otherwise you would have to sit down at a restaurant and spend upwards of 15 euros and an hour to consume. It's just more relevant for modern Romans.

RS: Your book does such a great job of combining the old and the new. One of the older dishes you include is carbonara, which as you point out, doesn't have an original recipe. I love how you write: "Bring up the subject of carbonara with a Roman and suggest an ingredient or technique that diverges from his or her own, and you have got a passionate fight on your hands." Given that, how did you decide which recipe to include in the book?

KP: After a lot of heavy carbonara research, I decided that Flavio De Maio's carbonara was the best expression of this Roman dish. He uses a lot of guanciale; he uses whole eggs; he uses a mixture of pecorino and Parmigiano-Reggiano. He cooks it in a hot, hot aluminum pan in the classic Roman style. He has this enormous, warped aluminum pan. He swirls the whole egg mixture in the pan until it coats the pasta.

I thought that it was a dish that could be recreated in the American or non-Roman kitchen and still really preserve the flavors and the continuity of that dish.

RS: In terms of newer foods and dishes in this ever-evolving cuisine, you include a recipe for pizza al contrario or upside-down pizza.

KP: There is this incredible baker and pizza maker Gabri Bonci. Rather than your classic pizza by the slice, he'll spread the toppings on a sheet pan, liberally coat them with olive oil, season them, and then put the raw dough on top. He will bake everything in the oven so the toppings are on the bottom and they aromatize the dough from below. He'll use lots of herbs, onions or even sausage. When you take the pizza out of the oven, let it cool, slice it up and flip it over, you have this rich, deep flavor that has infused the dough. It's wonderful.

RS: When you eat it, you actually flip it back over so the crust is on the bottom.

RS: Roman cuisine goes back thousands of years. Through the years we saw the rise of a really interesting hybrid, Roman Jewish cuisine. You include a number of Roman Jewish recipes: spicy fish with couscous and honey-soaked matzo fritters. How is it that this Jewish community, which makes up .3 percent of the city's population today, is so predominant right now with its food culture?

KP: I think that Romans, regardless of their background, are really super interested in authenticity. Of the 4.3 million people in Rome today, you'd be hard-pressed to find any community within that, aside from the Jewish community, that can really claim to be descended from the people of the Roman republic or empire. There have been Jews in Rome for 22 centuries. There's a specific Jewish rite that is practiced here, which is unique in the world; it's not Sephardic or Ashkenazic, it is Roman.

I think for that reason people want to taste these authentic flavors. The Jewish quarter, which is called the Jewish ghetto, occupies this area that for 300 years Roman Jews were confined to -- a walled, squalid, ghetto space. A unique cuisine emerged from those conditions of poverty that still persists on tables at homes and restaurants. It can be enjoyed in the Jewish quarter. It's become a point of reference not just for Jewish visitors, but for Italians who come from all over Italy to visit Rome, for foreigners from all over the world. They're especially interested in the deep-fried artichoke, which is called carciofi alla giudìa, Jewish style.

There's now a super fascinating facet of the Roman Jewish cuisine, a Libyan Jewish cuisine, which is a recent arrival to the city in 1967. Thousands of Jews escaped from Benghazi and Tripoli and were welcomed in Rome. They lived here as refugees. Some went to Israel and some stayed. Many are involved in food service in the Jewish quarter and sell couscous with spicy fish stew or shakshuka -- things that evoke North African flavors side by side with the classic Roman Jewish dishes. Things like concha, which is fried, marinated zucchini, anchovy and endive casserole, and of course the twice-fried artichoke.