'Fondue is all about the formula'

by David Leite
Listen: 'Fondue is all about the formula'
07:29 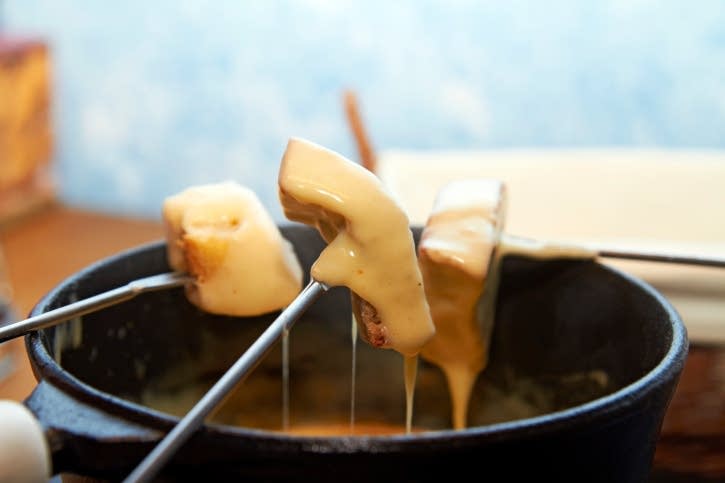 Writer Tim Neville traveled to Switzerland to learn about fondue from the masters. "The key formula -- and fondue is all about the formula -- is 200 grams of cheese per person," he says. He wrote "Rites of the Caquelon" for Ski Magazine. He shared The Fondue Manifesto and a recipe for 007 Fondue.

David Leite: How did you go from the idea of what we know in America as fondue to this trek all the way to Switzerland to find out the mysteries of fondue?

Tim Neville: I missed out on that whole U.S. fondue thing. I grew up in the '80s. For whatever reason, my parents weren't into the fondue thing.

I was 18 the first time I had it. It was in Switzerland as an exchange student. One wintry night my host father made a fondue. I had never heard of such a thing. All of a sudden, our house started smelling like what I thought was a foot locker. I mean it was just this horrible, pungent smell. We sat down, I tried it and wow -- a whole new world opened up to me. That was 25 years ago.

My wife and I got a chance to move back to Switzerland a few years ago. There I really dug in. When we moved back to Oregon in 2011, I was determined to keep that spirit alive of what I'd learned about fondue. But I realized I didn't really know that much.

I pitched a magazine. I said, "I'd love to go back to Switzerland and find the old-school cheese masters who could take me deep into the ways of fondue."

DL: Who were those cheese masters, those kings of cheese, you talk about?

TN: The main guy would be Fred Fischer. He's this fourth-generation dairyman. He had run a cheese shop called the Chäsi, which is just "cheese shop" in Swiss German, in a little town outside of Bern.

He came up with all these wonderful names for his different fondues -- the James Bond fondue, the flambe fondue, the fireman fondue, all these different things. He ended up being the master who taught me what it is, who made me the master.

DL: Let's talk about the basic cheeses -- those two cheeses that must be in there as a base.

TN: When you go to Switzerland, the classic fondue is going to have a base of Gruyere and vacherin. Gruyere is different than what you think of as Wisconsin Gruyere. It's a Gruyere cheese made in the pre-Alp region of Switzerland. Both of those cheeses come from there.

The classic recipe is what they call moitié-moitié, so half and half. It's half Gruyere, half vacherin, a white wine and then kirsch. But fondue is a little bit like biscuits -- everybody has their own way of making it.

DL: Take us through making a fondue. How would we do it?

TN: The wonderful thing about today is a lot of these cheeses are actually not so difficult to get. Trader Joe's actually carries the real Gruyere.

DL: Imported Gruyere is what you're talking about?

TN: It is, but they have it under their own label. But the first time I tasted it, I was like, "This is the real Gruyere for sure." You want that.

Then vacherin you'll have to get from a cheese specialty shop or a gourmet grocer. If you can't find vacherin, you can use something like an Emmental cheese. Emmental has a much more neutral flavor to it. Automatically, in my opinion, your fondue is going to be a step down just a little bit. Really try to find that vacherin if you can.

I learned how to make a fondue using the metric system. You're going to want a scale and one of those glass Pyrex measuring cups with metric units on it as well.

You want a nice fondue pot. Mine is ceramic. You just want something that's going to help distribute the heat more evenly.

You're going to rub a clove of garlic around the inside and the bottom of the pot. Just smear it around.

Then ideally you want to let that sit. This is something that Fred taught me. You want to let it sit for at least an hour. Just let it get all gooey in there before you start heating it up over a stove, about medium heat.

Another key thing is that you want to add starch. That's roughly 1 teaspoon of cornstarch per person. As you begin to heat this up, you want to use a wooden spoon with a hole in it. Stir slowly in a figure-eight. Just kind of easily, getting it going.

TN: Exactly. You don't want to bring this to a roaring boil by any means. You just want it to melt nice and slowly.

What's going to happen -- and I used to panic with this -- is that it begins to separate. You're like, "Oh no, I've ruined it." Take a deep breath, just wait and it should all come back together.

One of the fun things to do is to add just a little bit of kirsch. Sometimes if I'm feeling like it, I'll have some. I'll add the cornstarch to the kirsch, mix it in that way and add that in as everything is getting all liquidy. Just let that get in there. That really gives an aromatic kick to it.

Other people will just keep kirsch, like a nice cherry brandy, off on the side. They'll dip their square cubes of bread into the kirsch before they dip it into the pot of cheese.

David Leite is the publisher of the website Leite's Culinaria, which has won two James Beard awards. He is the author Notes on a Banana: A Memoir of Food, Love, and Manic Depression, as well as The New Portuguese Table: Exciting Flavors from Europe's Western Coast, which won the 2010 IACP First Book/Julia Child Award. Leite also won a 2008 James Beard award for Newspaper Feature Writing Without Recipes, a 2006 Bert Green Award for Food Journalism, and Association of Food Journalists awards in 2006 and 2007.
Raw Corn & Avocado Salad
Cucumber Tahini Gazpacho with Crispy Spiced Chickpeas
Summer Squash Escabéche with Mushrooms, Arugula, and Steak
Salmon Cakes with Chimichurri