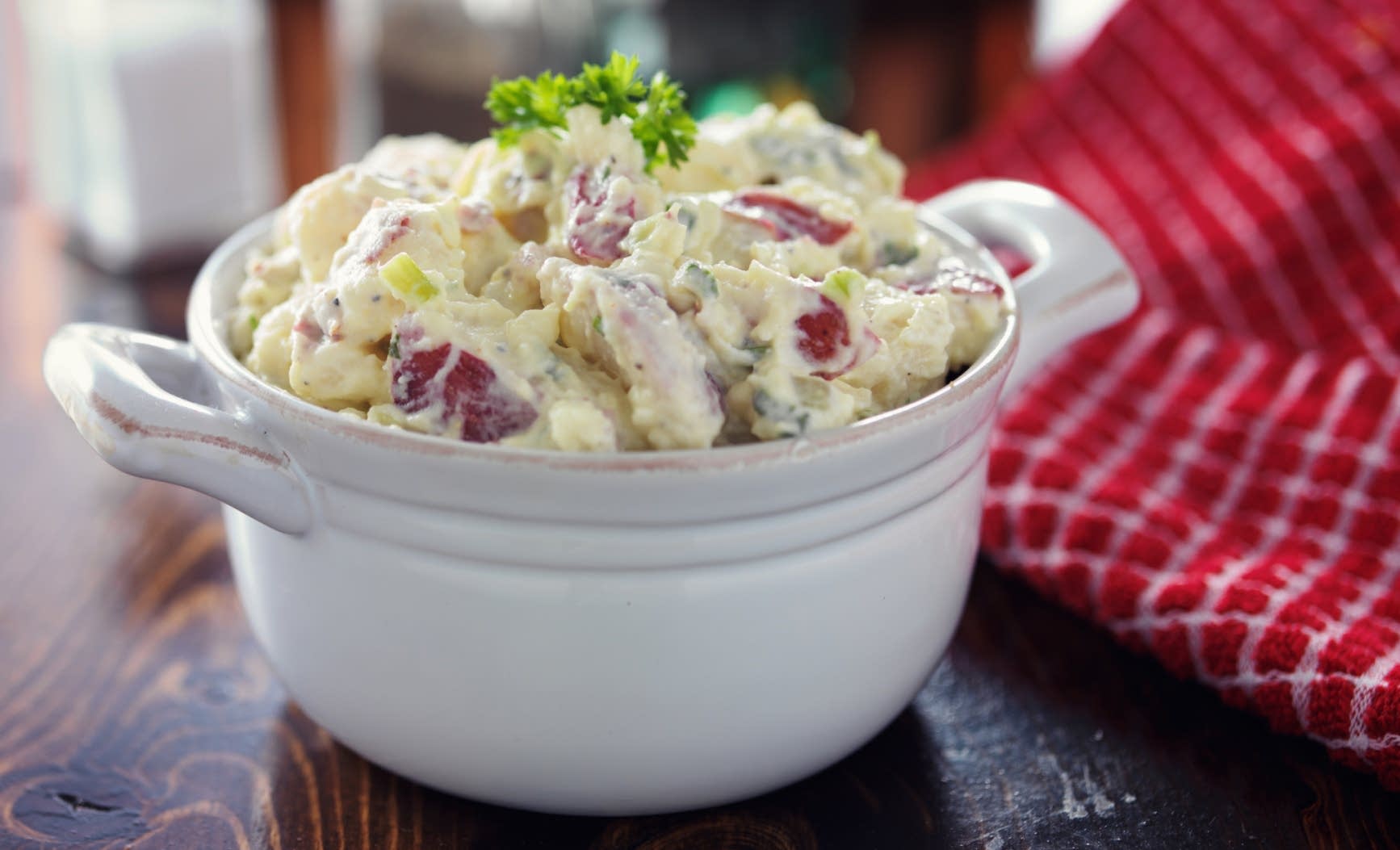 For Julia Child, the Fourth of July meant potato salad. In this interview from 1995, she shares how she made hers, and she and Lynne Rossetto Kasper agree on a cut of meat for hamburgers.

Lynne Rossetto Kasper: What comes to mind when I say the Fourth of July?

LRK: You and Paul spent so many years living outside of the U.S. Did the holiday take on a special significance during those years?

JC: It did very much so when we were in Paris. We got there in 1948. That's a long time ago. The American embassy always had an enormous reception for all the Americans in Paris. They had it on the lawn of one of their embassy houses. There were just thousands of people there. [More from Child on her time in Paris.]

LRK: Did they do hot dogs and hamburgers?

JC: No, it was very French as to what they did. Obviously it's so long ago I can't remember now. But it was very good because they had an excellent chef.

I know what we do here, which is hamburgers and potato salad. I love it.

LRK: Do you have a favorite recipe for the Fourth of July?

JC: I love potatoes. I have a very good potato salad.

The most important thing is to cook the potatoes properly. I've had an awful lot of potato salad where the potatoes were not quite cooked through. You just can't eat it. It takes all the pleasure out of it.

I slice the potatoes first, then I cook them in lightly salted, boiling water. I keep tasting them just to make sure that they're just done because crunchily undercooked potatoes are horrifying.

LRK: What kind of potato do you use?

JC: I use either the new potatoes or the red potatoes. You have to have one that's going to boil properly. Those Yukon Gold are awfully good -- they're just delicious.

After you boil them, they're just right. Then you drain them out. While they're still warm, you toss them with some finely minced shallots, scallions or very, very finely minced sweet onion, and then salt and white pepper. I put in either a little potato cooking water or a little chicken stock and a little bit of wine vinegar to taste. Then I just very gently toss them around.

We have celery and dill pickle. I like a little crisply cooked crumbled bacon and diced hard-boiled eggs. I always use the canned red pimento and some fresh minced parsley. Toss that all around. You don't want too much mayo in it.

LRK: That sounds so good -- the idea of the broth.

JC: You have to be very careful folding it so you don't break the potato.

What cut of meat do you like for hamburgers?

LRK: I personally love the chuck.

LRK: I think it has superb flavor. I'm one of those people who feels very strongly that I may not eat it very often, but when I do, I want my beef to be luscious and succulent.

JC: I feel that way too. I hate fake food. I think people are really so nutty now that they hear you have to watch your fat, and then some people give it up entirely.

LRK: Unfortunately or fortunately, I think you're right.

JC: You can't have any fun eating that kind of a diet. All you can eat are vegetables and legumes? The hell with that, I think. I talk to nutritionists all the time -- well, I don't talk to ones that I don't agree with anyway -- but I think most of them say to try for 20 percent fat. You'll probably end up with 30 percent, which is just right.

LRK: I agree with you. I think the other thing that we've really missed the point about in the way we eat here is we tend to overdo it all the time.

JC: We certainly do. People say, "Watch out." Then people give it up entirely.

LRK: The idea of -- you and I talked about this a long time ago -- moderation.

JC: Moderation, great variety and small helpings are very useful because we're used to being so generous in our helpings in this country.