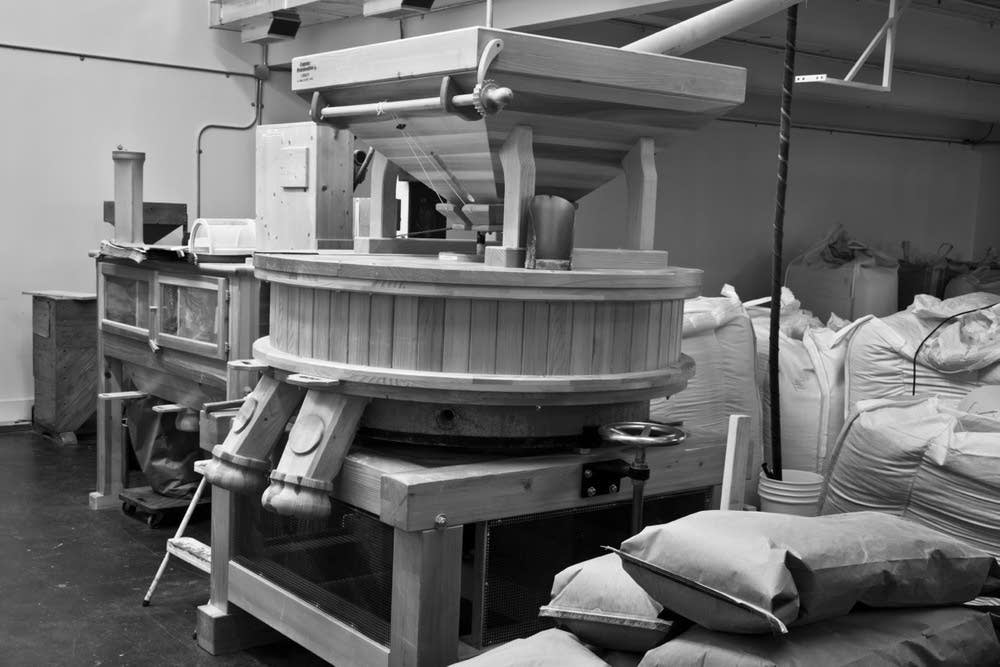 In the mill room, a cavernous, chilly space in a multi-use facility in West Asheville, North Carolina, that used to be an electrical equipment plant, Kim Thompson takes out a marker and kneels down by a sack of freshly milled flour. She writes the type of flour, the date and often, something extra.

One day, it might be "panivorous" -- the word of the day she found on an app on her phone -- and its definition: "subsisting on bread; bread-eating." Another day, it might be a quote about bread, like the Danish proverb "art and knowledge bring bread and honor."

Kim is the miller at Carolina Ground, a mill producing locally grown and ground bread flour, pastry flour and rye flour. She says writing on the bags by hand feels mindful and purposeful. She likes putting a piece of herself into the product that goes out.

Carolina Ground is the brainchild of founder and general manager Jennifer Lapidus, who created the L3C in response to the 2008 spike in the price of wheat. Concerned about food security and drawn by the idea of closing the gap between farmer and baker, her vision was of a mill dedicated to grains grown and ground locally. Knowing that our industrial food system is based on the nonrenewable resource of cheap fuel, Jennifer wanted to do her part to rebuild community food systems.

The centerpiece of Carolina Ground is a wooden-hulled stone gristmill made by a family in Austria. Grain is put into the hopper and crushed by two horizontal stones, each 48 inches in diameter, emerging, in the case of wheat, as whole wheat flour. For refined varieties, it is then diverted to a sieve device called a bolter for sifting. The screens in the bolter remove the larger bran but not the germ, which continues to impart its oils, nutrients and flavor.

The flour from the stone mill is cream colored rather than white, and Kim says she also feels a creaminess of texture. Refined industrial flour, in contrast, feels dry to the touch.

Carolina Ground sources its grains from certified organic farms in the South -- this past season, mainly Madison, Georgia, and Eagle Springs, North Carolina. Hard red winter wheat is milled into bread flour -- either 100 percent whole wheat, which is unsifted, or various gradations that pass through a screen in their bolter. Crema, their most refined flour, has about 45 parts sifted out. Soft red winter wheat becomes pastry flour, ranging again from unsifted whole wheat to the more refined crema variety. Carolina Ground doesn't sell all-purpose flour, but Jennifer encourages customers to blend their own using a mix of pastry and bread flours. The women also have rye grain on hand, as well as Appalachian white, a wheat with which they're still experimenting.

The Carolina Ground milling process is a far cry from standard industrial flour production. The average modern mill uses steel rollers in a method called gradual reduction in which the wheat's nutritious bran and germ are separated out from its endosperm, yielding a white flour that is nearly all starch.

Even commercially processed whole wheat flour, I learn, isn't really whole. Sure, some or all of the bran and germ are added back in, but they're subjected to such high heat in the roller mill process that they end up contributing little in the way of nutritional value. Carolina Ground, in contrast, practices cold milling. The women don't let the flour get over 100 degrees Fahrenheit, which keeps the oil in the germ from going rancid.

"It's amazing to me sometimes when I look at the packaging," Jennifer says, "the ingredients on a loaf of you know, I-wonder-why-they-call-it-bread bread ... the idea of enriching our flour, coming back and putting nutrients in when it was all pretty much there ...."

Why would millers go to the trouble of separating the different parts of the grain, only to then add them back in, along with vitamin enrichments, at the end?

From online research I learn that the initial reason to separate the grain into parts was that the oil from the wheat germ would clog the steel roller machines. The steel roller machines were fast; what miller would want to go back to the slow stone milling? But then, too, there was the incentive of the extended shelf life of the nutrient-stripped white flour.

In "The Mystery of the Mill," an introduction to Cooking with Wholegrains, a 1951 cookbook written by Mildred Ellen Orton, Vrest Orton writes:

"I suspect that the desirability of making foods as light as a feather and as white as chalk was brought about, shrewdly, after millers and bakers found by the removal of the germ, and by the introduction of bleachers and chemicals they could make food that, like any other embalmed thing, kept until it was sold!"

How many other unhealthy developments in our society have resulted from similar reasoning?

One of Jennifer's early jobs in college was as a lab tech for an archaeologist. She remembers being thrilled to find a mortar and pestle in a dig. The simplicity of stone on stone, just cracking grain into flour, really appealed to her. In a way, Carolina Ground is going back to the same simplicity, producing a flour that is whole, not reconstituted. "It's exactly what it says it is," Kim says, "which I think is so simple and so beautiful. It's crazy to me that the whole other process is to actually remove things and put it back when it's already there."

Among other distinguishing features in their eclectic backgrounds (Jennifer has both forklift driver certification and a masters in creative nonfiction, while Kim is a former marine and has a degree in religious studies), Jennifer and Kim are both former bakers. And from a baking standpoint, they really appreciate stone-ground flour.

Customers agree. "The results have been fantastic," says David Workman of Flat Rock Village Bakery, who has used Carolina Ground flour for the past 2 years. "Everything about the bread is better. The flavor, especially, is amazing. The flour is a lot more alive."

The mill itself is finicky and needs personal care. Instead of steel and electrical panels with digital settings, the women set the stones by hand. For small adjustments, there's twine and a leather tab. "You can't not pay attention to what's going on," says Kim.

Jennifer believes intuition is key to their process, and thinks it's significant that they are two women running the mill. "We are geeking out on the tactile aspect of this," she says. Working with the stones requires a sensitivity that is extraneous to the workings of mechanized steel roller mills. Kim often uses her hands to see when the grain is sifted properly.

In light of today's commercialized society, with box stores and the impersonality of being able to order everything online, the tactile element is especially important. "I think people are hungry for heart and for authenticity," Jennifer says. "I think that's part of what we're delivering."

Perhaps the difference between Carolina Ground and other milling enterprises has to do with the end goal: Is it to make a quality product that nourishes and connects people? Or just to make money?

Kim says that for her, milling at Carolina Ground isn't really a job. "I feel so connected to everything I do here," she reflects. "I think a lot about how my life depends on the faces of people that I never see." In contrast, she has met a lot of Carolina Ground customers.

Milling makes Kim feel connected in a larger sense, too. "It's an ancient art," she explains. "If not the oldest, then one of the oldest forms of mechanized production for creating food, so I can't not feel intrinsically connected to history .... " As she mills, she thinks of where the grain has been and feels responsible for where it goes afterward.

It hasn't been easy to get Carolina Ground up and running. Just a few of the things that keep Jennifer busy are dealing with microtoxin testing, federal grades and FDA inspections. The idea of the mill is piloted and proven, Jennifer says. Now it's time to actually do this as a durable business, with more mechanization that will create greater efficiency and less strain on their bodies and lungs. They need to raise $300,000 for the planned expansion.

"Would that mean giving up the Sharpie markers?" I ask. "Never!" Kim exclaims, as Jennifer says, "No, no, no." They wouldn't want to sacrifice quality or the tactile element of what they've been doing.

I remember reading the label on a bag of flour in Italy: "farina integrale," it said, whole wheat flour. It was the first time I had seen the word integrale used in this way, and it made me ponder the relationship between flour and the English words integral and integrity. Does whole wheat flour, thanks to its more complete nature, have more integrity than white?

Comparing Carolina Ground flour to your standard roller-milled white, I would say yes, it does. Milling whole flour, combining the tactile with the cerebral, and connecting people, Carolina Ground integrates. I see Jennifer and Kim as healers: of the food system, of consumers and perhaps even of themselves.

Carla Seidl is a multidisciplinary artist who writes, produces radio documentaries and has released two albums of folk music. She profiles growers and ingredients from North Carolina on earthflavors.net.