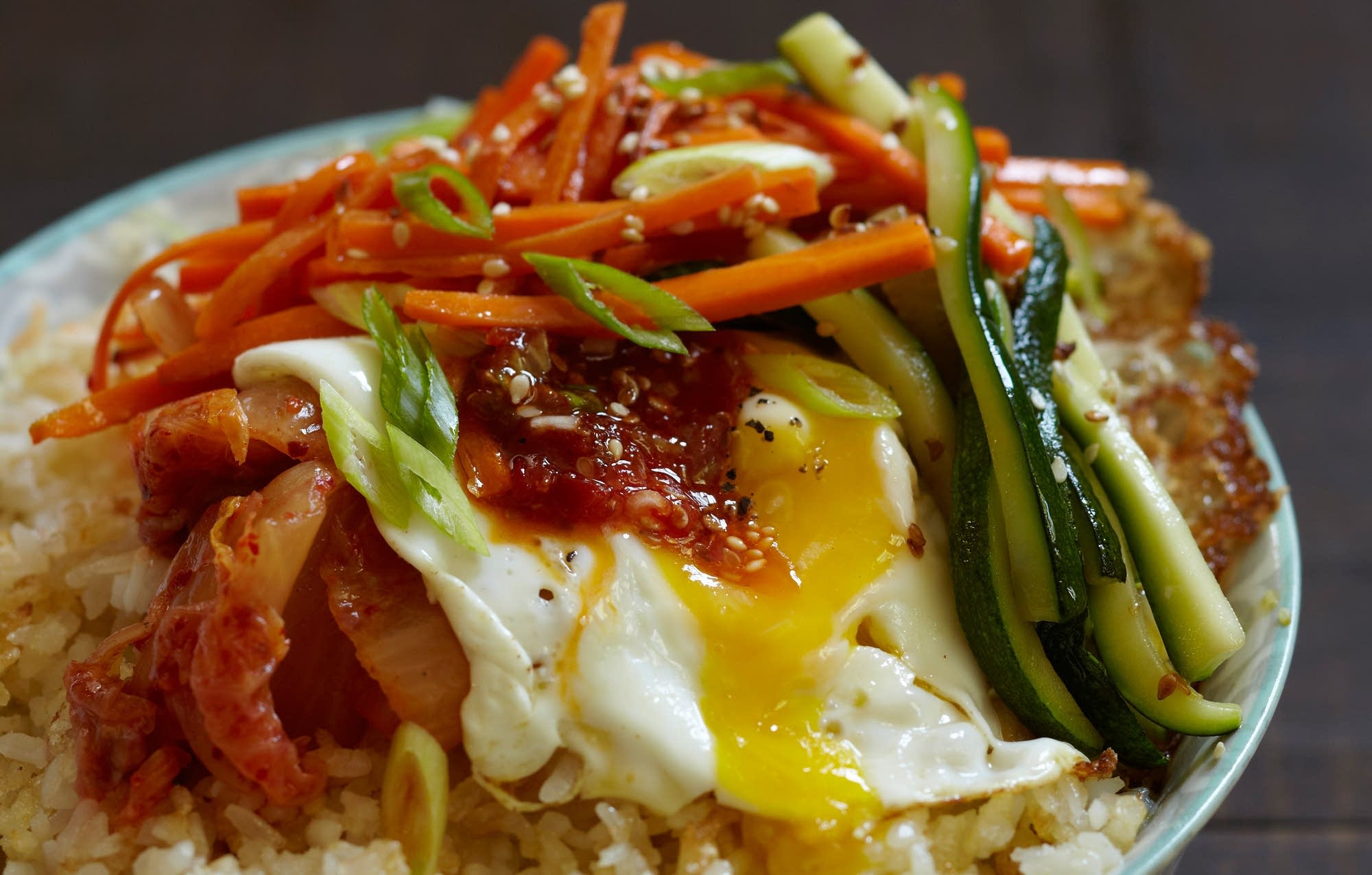 If you’ve lived in New York as long as I have, you learn to love a steaming stone pot of Korean bibimbap as much as a comforting bowl of mashed potatoes. Bibimbap, which means “mixed rice” in Korean, is so much more than that. The steamy soft white rice is a comforting cushion for sautéed carrots, spinach, and kimchi, and for the grand finale, a fried egg, often tossed tableside with spicy red-pepper gochujang paste. This filling, flavorful meal is surprisingly easy to execute at home. With all the vegetables, there’s no reason not to make it a habit. Consider yourself armed with the best of both worlds—flavor and health. Bibimbap is vitality in a bowl, from your very own kitchen.

To make the Bibimbap: Rinse and soak the rice in enough water to cover while you prepare the vegetables. Cut the carrots and zucchini into matchsticks and set aside. Drain the rice and combine with the 3 cups/720 ml water in a pot with a tight-fitting lid. Bring to a boil over medium heat, reduce the heat to medium-low, cover tightly, and simmer until the rice is tender, about 20 minutes.

Heat your largest large cast-iron skillet over medium heat. Add the sesame oil and 1 tbsp of the peanut oil and heat until shimmering. Cook the carrots, zucchini, and spinach, one at a time, until wilted and toothsome but tender enough to pierce with a fork, 3 to 5 minutes per vegetable. Transfer the vegetables to a platter as you cook them and cover loosely to keep warm. Season with 1/2 tsp salt.

Drizzle the remaining 1 or 2 tbsp peanut oil over the bottom of the cast-iron skillet or a clay pot, if you have one, and add the cooked rice. Heat the skillet over medium heat until the prized crispy layer of rice along the bottom forms, 6 to 8 minutes. (If you have them, you can do this in four smaller cast-iron skillets or ramekins, which are fun.)

Lay the fried eggs on top of the rice, followed by the cooked vegetables and the kimchi. Sprinkle sesame seeds over the top and dollop with gochujang paste. Serve warm with more gochujang paste. Each diner should toss the bibimbap all together with chopsticks before eating.

Kimchi, the staple sour of Korean cuisine, is both fermented and pickled. And by some standards, it’s one of the world’s most healthful foods. It’s also incredibly easy to make at home, requiring only patience and a few empty jars. For the price you pay for buying good kimchi in some markets, or for doing without when you can’t find a jar at a nearby store, it’s far easier just to go DIY, and really gratifying, too. No pickling project has ever made me more proud.

Slice the cabbage in half lengthwise. Trim out the tough root and cut the cabbage lengthwise into thirds or quarters, depending on how fat the cabbage is. Combine the water and salt in a very large bowl and stir to dissolve. Submerge the cabbage pieces in the water, cover with a plate to hold them down, and set aside for at least 2 hours on the countertop.

Meanwhile, finely chop the garlic and ginger by hand or in a food processor. Transfer to a large bowl and stir with the hot-pepper paste, fish sauce (if using), sugar, and green onions.

Drain and squeeze the cabbage leaves very dry, patting between the layers with a kitchen towel. Toss the cabbage in the hot-pepper mixture, covering each layer completely with the paste and rubbing in well. Pack the cabbage into a clean, sterilized tall glass jar and cover tightly. Leave the jar in a dark place overnight.

Check the kimchi after 1 day. When you see some bubbling, which signals fermentation, transfer the kimchi to the fridge. If the kimchi is not bubbling, let it sit in a dark place another half day to a day.

Store the fermented kimchi in the fridge for up to 3 weeks. Sprinkle toasted sesame seeds over the top before serving.