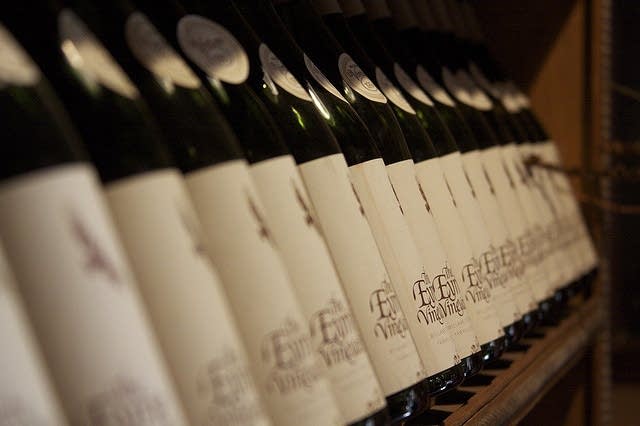 In 1966 David Lett and his wife, Diana, spent their honeymoon planting the first commercial pinot noir grapes in Oregon. "I wanted to make the great American pinot noir," Lett says. "I figured there was no climate cool enough in California to do that."

That was the beginning of The Eyrie Vineyards, which went on to attain cult status and help start Oregon's pinot noir industry. David Lett and his son Jason, who serves as The Eyrie Vineyards' winemaker and vineyard manager, talk about the history behind Willamette Valley's first pinot noir.

Lynne Rossetto Kasper: Going back to when you were studying at University of California, Davis -- which I always think of as the Harvard of wine -- what were you drinking when you started to fall in love with pinot noir in the early '60s?

David Lett: There were very few pinots in California, so the curriculum was primarily based on French Burgundy. That was my introduction to pinot noir, and that's what turned me on to pinot noir. They're ethereal. Pinot noir evokes so much in yourself. It was truly an exciting wine to drink.

This was back in the days when pinot noir was made quite differently in Burgundy than it is now, thank God. It was a nice wine. They're messing around with it a little too much in Burgundy these days.

LRK: What you're emulating at Eyrie Vineyards are those wines that you were drinking early on, those ethereal, soul-touching -- if I could coin a phrase -- wines?

DL: I am trying to, but I've stuck to what I started with, and that is the Burgundian ideal of the 1960s.

LRK: You came here from California in 1966 and you planted pinot noir grapes. You could have gone anywhere with those grapes. Why did you pick Oregon?

DL: Because I wanted to make the great American pinot noir. I figured there was no climate cool enough in California to do that.

LRK: When did you bottle your first vintage?

LRK: Was it in 1975 that you entered the pinot noirs into a tasting in France? Am I remembering that correctly?

Jason Lett: I can help with some of the dates. The vintage that was submitted was the 1975, but the year was 1979.

"I think the grapes are all-important. They're the basis of the expression of the wine."
-David Lett

LRK: What happened with that tasting?

DL: It was amazing. We were in competition with a number of fine Burgundies in the first competition. Then Robert Drouhin called a second competition, and we did even better. We placed second. I think Oregon was made then.

LRK: Drouhin was a very famous maker of Burgundy. He called that second tasting because you had done so well in the first that he wanted to disprove it?

LRK: What happened after this second tasting? Did you suddenly have a market for your wines that you hadn't had before?

DL: I was dancing in the driveway. It was fantastic.

LRK: I've been told that this may well be the most difficult grape to grow -- that it's called the heartbreak grape. It seems to be such a strange choice for someone beginning in the business, making his first wine himself and choosing a grape that's so demanding.

DL: That was the fun part, it really was. Diana and I were talking a few months ago. She said, "What would you do if you had this to do all over again?" I said, "Exactly the same thing. I'd do the same." It was fun. I was starting something new and I enjoyed it.

LRK: What were the biggest challenges with that grape?

JL: Every vintage is a new challenge. That's one of the great things about growing pinot noir. It's really expressive of vintage, of the person who makes it, of the place where it's made and of every sort of nuance that goes into growing that grape. There's a whole new set of challenges every year, and that's what makes it so fun.

LRK: Were there out-and-out failures? Did you have years where it was just impossible for you?

DL: There was 1984, and that was supposed to be an out-and-out failure. Most people didn't even make pinot noir that year. They turned it into rosé or something. I stuck it out and made a red wine out of it. It's delicious today.

JL: We just had a tasting of every vintage we've done, all 37 vintages. Many of the people at that tasting picked the 1984 as a favorite from that decade. That's a real testament to dad's ability to adapt to changing conditions from vintage to vintage.

LRK: How do you make pinot noir?

The best thing to do is to leave the grapes alone and let them express themselves under proper growing conditions. We grow good grapes. Jason does a fine job. He also makes fine wine, which is fortuitous.

"Grape vines are a bit like human beings. As they age, the quality of what they produce goes up and the quantity goes down."
-Jason Lett

JL: I think one of the things that sets our process apart is how intuitive we are. That's certainly what I've learned from him. That's one of the advantages of being a second-generation winemaker -- using the word maker loosely. I can work more intuitively because I've had the experience of working vintages with dad and seeing the way that he responds to the environment.

LRK: Jason, I would imagine, did you teethe on a wine bag?

JL: I teethed on a wine cork, that's for sure. My kids have too.

My dad used to do a little game with us. He would buy a roll of Life Savers. He would hold a Life Saver in his hand and we would have to smell it. If we could tell him what flavor it was, he would give it to us. But if we couldn't, he'd eat it.

LRK: How many times did you get it right?

JL: I was pretty much 100 percent on Life Savers' smells.

LRK: There is a slope in the vineyard that is covered with vines. Which vines are those?

JL: Those are pinot noir vines, and that block is special to me. It was the last block we planted at this vineyard. I got to help do it in 1974 when I was 4 years old. Over the hill you'll see the original vines, the ones that were planted in 1966.

JL: Grape vines are a bit like human beings. As they age, the quality of what they produce goes up and the quantity goes down. These vines will continue to produce fruit for probably past their 100th year. What we're going to continue to see as that process happens is an increase in quality and a decrease in quantity.

We're already starting to see this. This vineyard is giving us maybe a ton-and-a-half to the acre every year. But the flavors are concentrated and gorgeous, so we'll keep farming this long past the time an accountant would tell me to pull it out.