In the kitchens of immigrants, learning to cook

by Lynne Rossetto Kasper
Listen: In the kitchens of immigrants, learning to cook
07:20 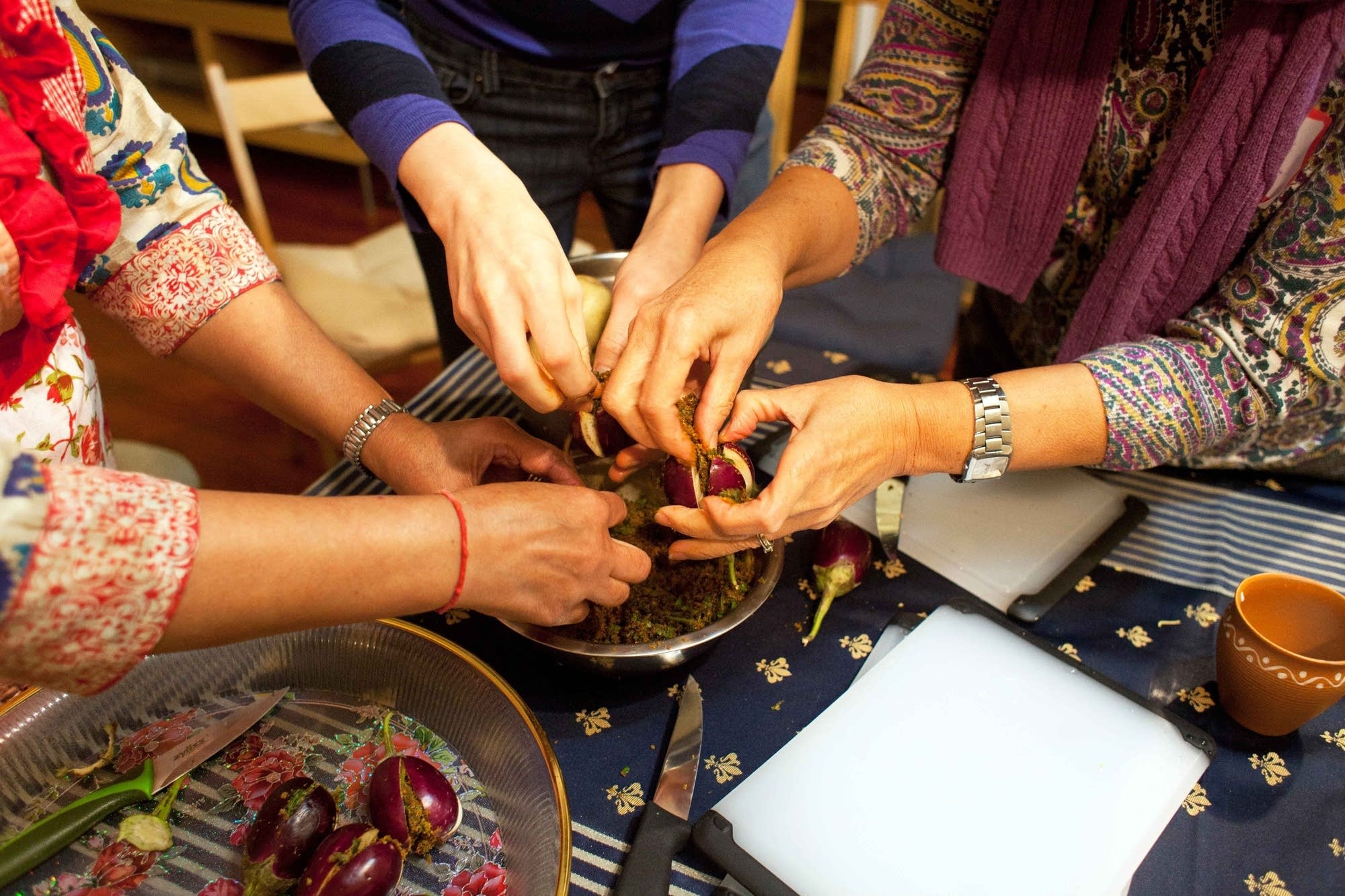 Photo: The League of Kitchens

While living on her own for the first time, Lisa Gross had a fantasy: Wouldn't it be amazing if you could learn to cook in the home kitchens of people from all over the world? She turned her fantasy into a reality by founding The League of Kitchens, a series of workshops with immigrants who share culture, stories and recipes.

Lynne Rossetto Kasper: I understand that your grandmother in a way really started this project.

Lisa Gross: Yes. But it's not because I learned how to cook from her; it's because I didn't learn to cook from her. My mother is a Korean immigrant. She came to the U.S. in the '70s. My father is American, of Hungarian-Jewish descent.

My Korean grandmother lived with my family when we were growing up and cooked tons of amazing Korean food all the time. But whenever I would try to help her or show interest, she would always say, "Don't worry about cooking. Go study. Studying is more important."

She really wanted me to have opportunities that she didn't have. I really appreciate that. But what that means is I never learned to cook Korean food. The same is true for my mother.

After college, when I was living on my own for the first time and cooking a lot for myself, I wanted to cook all this Korean food. But my grandmother had passed away by that time. I started to try to teach myself from the Internet, from cookbooks. But nothing ever tasted as good as when my grandmother made it. What I realized is that there are often very subtle differences in technique, method or even ingredients that make the difference between something that's good and something that's really exceptional.

LRK: How many teachers do you have and what countries are they from?

LG: Right now, we have eight instructors. They are from India, Greece, Lebanon, Korea, Afghanistan, Bangladesh, Trinidad and Argentina.

LRK: The Korean instructor: Is she the "grandmother" that you were looking for?

She makes her own soy sauce and doenjang, which is like Korean fermented miso paste, from scratch, from soybeans. She ferments these in traditional ceramic fermenting jars on her front porch in Bayside.

The reason that she does speak English is that she and her husband, a retired minister, came to the U.S. in the early '80s and were stationed in the church in different parts of the U.S. She really got to know a lot of Americans. She became a social worker and runs a small Korean social service agency in Queens. She's this magical combination where she has a deep culinary knowledge, but she's also very open and comfortable hosting American strangers in her home, which many Koreans of her generation wouldn't be.

LRK: Tell me about the instructor from Trinidad.

LG: Dolly is known as the best cook in the neighborhood. She cooks a lot for her temple. She's of Indian-Trinidadian descent, so her family is Hindu.

She has a separate semi-outdoor kitchen that she uses in addition to her inside kitchen. She has a specially built tawa, which is a kind of griddle for making different kinds of roti, especially her famous buss-up-shut roti. It is this torn-up, really amazing, pillowy, flaky bread that you use to sop up curries and other dishes. She also has a garden where she grows a lot of culturally specific herbs.

Actually, Sunny, our Korean instructor, also has a garden where she grows about 40 different kinds of vegetables and herbs and has seven fruit trees. That's something that really gets me excited. I think it points out, "You should be an instructor for us." It shows someone who is really committed to ingredients in that way, and I think that all of our instructors are.

LRK: How do you find these people?

LG: Finding the instructors can be difficult because we are looking for somebody really special. That's someone who has this deep culinary knowledge of traditional techniques and methods, someone who is really warm and outgoing, who is a great host, and is comfortable hosting groups of American strangers in their home.

We do a huge amount of outreach to different community groups, nonprofits and language schools. We post on Craigslist. We bring people together for info sessions, do brief interviews, and then with the most promising candidates, we do in-home cooking auditions. From there we do our hiring.

To get our first six instructors, we interviewed close to 150 people and did in-home cooking auditions with about 25. You're taking a class with someone who is really special in a lot of different ways.

LRK: How do you turn these wonderful home cooks into teachers and also recipe writers? That's just not something everybody does.

LG: With each of our instructors, we do a very intensive paid training period, where they practice teaching. They attend each others' practice workshops. We help them create their menus. We do a lot of coaching because -- you are exactly right -- being a good cook is very different from being a good teacher of cooking.

One of the big things that everyone has to learn to do is talk while they cook. They have to really become aware of what they're doing, how they're doing it and why. Because for many of them, they've made all of these dishes a thousand times and they don't think about it anymore. It's almost automatic.

We also work with a professional recipe writer and tester, Liz Tarpy, who is former senior editor at the Food Network. She cooks with all of our instructors -- she pauses them, takes what they are doing, measures it, weighs it and takes note. Then she goes home, cooks through the recipe in her own home kitchen and then writes it out in a professional test recipe. So we have that to give to the students.