Words matter: 'Can you imagine if instead of meatloaf we called it fleshloaf?'

by Lynne Rossetto Kasper
Listen: Words matter: 'Can you imagine if instead of meatloaf we called it fleshloaf?'
06:02 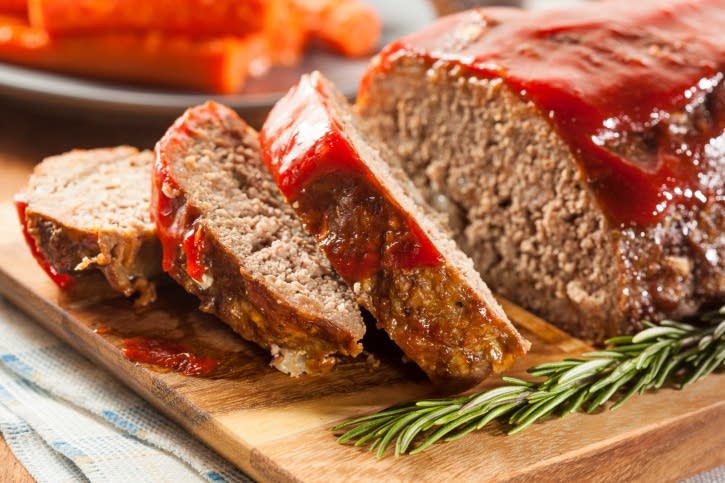 Ina Lipkowitz, author of Words To Eat By: Five Foods and the Culinary History of the English Language, says, "Can you imagine if instead of meatloaf we called it fleshloaf? That would sound terrible. What we call food matters."

Lynne Rossetto Kasper: These five foods, what are they and why did you choose them?

Ina Lipkowitz: I chose these five for several reasons. First, I wanted to represent the major categories of the surgeon general's food pyramid, which has been ousted by Michelle Obama's dinner plate, but I still had the food pyramid in mind. Bread stands in for the cereal group, apples and leeks for fruits and vegetables, milk for dairy, and meat for protein.

But more importantly than that, I was drawn to these five foods because their names are among the oldest food names we have in the English language. People in Britain have been calling apples "apples" for thousands of years. Leek, milk, meat and bread have been in daily use for almost as long. Most of our other food names have come to us from other peoples more recently. These are the oldest names because these are the foods that we've been eating the longest.

One of the main ideas of the book is that you simply cannot separate foods from their names. Food names, they don't just name food, they convey attitudes that are very specific. Think of pâté versus chopped liver, or calamari versus squid tentacles. If bread were sexy enough, why is the store downstairs called "Panera" or "Au Bon Pain"?

We go to other languages. We Americans, we English speakers and particularly Americans, I think suffer from a vast inferiority complex. On the one hand, we are so taken in by Italian and French language and food. I love the English language; I love our English words. I think we should be prouder of our English and Northern European language, heritage and foods.

I see trends in the foodie world that more and more interest is going to. For instance, simpler preparations of meat. There's a wild food movement out there going back to foraged vegetables. Chez Panisse put a forager on its payroll; a lot of other restaurants have now followed suit. Breads are going back to less controlled, more wild fermentation. Apples are going back to heirloom, not as grafted as they had been. I see all of these trends returning us to an attitude about food that's very different from what we've had in a very sophisticated Italian and French way.

LRK: There's a point you make that I've always wondered about: We don't eat cow, we eat beef.

Can you imagine if instead of meatloaf we called it "fleshloaf"? That would sound terrible. What we call food matters -- it conveys attitude.

In fact that's how I begin the book. I was moving to North Carolina for a year, and I was invited to a pig pickin'. It sort of horrified me -- to tell you the truth -- because it was this great, big, dead animal. You couldn't think it was a tenderloin or a porkchop, it was the whole animal. It was called "a pig pickin'," not a pork roast.

I think the name got me as much as the thing because pork and roast are from French, and pig and pick are old English words. There was no way I could deny what it was I was doing. But the thing was the meat was delicious, completely delicious. So I was drawn over to a very straightforward way of preparing it, and calling it by a no-nonsense name.

LRK: There's something else that you get into in the book, which seems to be a stretch, but then again it isn't. You bring religion into the picture of food words.

IL: Right. Well, religion, and more specifically the Bible. The Bible, although it is obviously popular the world over, never forget that it came from the Mediterranean. Whether the Hebrew Bible or the New Testament, it came from the world where fruits and vegetables grew readily, where meat was by and large not the mainstay of the diet, where milk was not drunk. When the Bible with the religious attitudes moved up north, it had quite a few problems where people happily ate meat, drank milk and so had no reason to stop doing so.

When Saint Paul told the people down south, "It is good not to eat meat," or in another one of his letters he said something like, "Everyone who lives on milk is unskilled in the word of righteousness, wean yourself of milk." How are those lines going to go over up north where people had no reason to want to stop eating meat or drinking milk?

There were a lot of differences between the food symbolism in the Bible and food attitudes up north. That conflict remains to this day because people continue to eat meat and drink milk, even as they read the letters telling them not to do so.