How to make toum, the otherworldly Lebanese garlic paste

by Sally Swift
Listen: How to make toum, the otherworldly Lebanese garlic paste
05:51 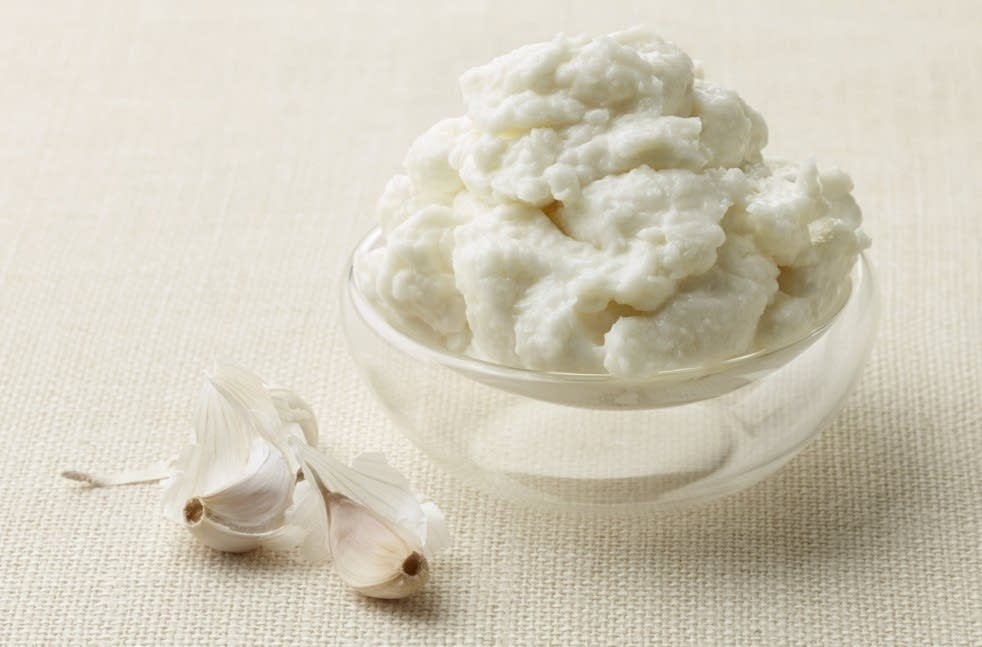 Toum is a garlic paste Lebanese cooks have been slathering on their kebabs since the first garlic shoot popped up in Lebanese soil. Bonnie Benwick, deputy food editor and recipe editor at The Washington Post, tracked down an authentic recipe for this seemingly magic sauce.

Sally Swift: I have recently discovered the joy of having a big jar of minced garlic with olive oil and salt in my refrigerator for midweek. You have taken that to another level.

Bonnie Benwick: I've actually uncovered the secret for a couple of years. I've been buying this garlic paste known to the Lebanese chef who makes it and to other people as toum. He sells it in small and big batches in his deli, and makes it by the bucketful every single week for his café across the hall.

SS: But it's not paste. What you brought me is fluffy.

BB: It is really otherworldly. It's the magic of a really good food processor, Vitamix or Robot-Coupe, depending on who you are. They turn it into something that looks like egg whites. It's that fluffy; it's that light.

The best thing about it is I've learned that it just mellows out the garlic enough. You can stir it into so many different things. What it started out being used for was basically to marinate chicken for shawarma, but he's branched out. I've learned to branch out; I got a little addicted to the stuff.

SS: It is beautifully fragrant. Tell me how you make this.

It's a very light canola oil. The chef, Joseph Chemali, is a long-time embassy chef in Washington, D.C. He told me a lot of people use olive oil, but that tends to make it heavy. The difference is you might get something that's creamy rather than something really fluffy, light and ethereal like his is. It's a light canola oil, lots of peeled garlic cloves.

SS: How many for a batch?

BB: If you're going to make it, you may as well make it. For about 4 cups, which lasts me about a month, it takes about seven heads of garlic.

There are easy ways to peel whole heads of garlic. You can put them in a big mixing bowl and put another bowl on top of it so that you're creating a closed ball. You're going to shake it as hard as you can -- it makes a lot of noise. Then when you open it up, just about all the peel has fallen away from the individual cloves if you've done it right.

Another thing that you can do very easily is soak them. For this recipe it doesn't matter at all, and that tends to be what I do.

SS: In cold water or hot?

BB: In lukewarm water, in cold water. It doesn't matter. Just to help things along, I will disengage the root end so that they're free to float and let the peels do as they may in the water.

To the canola oil and garlic, you add 1/4 cup of lemon juice and water. That's it.

SS: You whir it up in a food processor?

BB: He took me through the steps of the process. It's the layering and the way you put it in the blender or food processor that makes a big difference between that creamy stuff and this very egg-white, fluffy, light stuff.

BB: I haven't been kissing a lot of people lately.

I did start marinating chicken with it. Because it's so potent, if it's freshly made, I will just slather it on some chicken breast or some chicken that I'm going to make kebabs with later and put them on the grill. It just commands a whole bunch of flavor in a very short amount of time, so there's no marinating all day or in the freezer.

But lately I've been stirring it into eggs in the morning (my colleagues love me) with a little bit of crème fraîche and some tomatoes. It can taste Greek, it can taste Italian, it can taste Mediterranean.

It's now my go-to base for garlic toast. Usually you melt the butter and you stir in the garlic and then maybe you burn it. Another thing I like about it is I'm not chewing on little bits of garlic. I'm not worrying that it's getting too dark in the pan.

I've also put it in cold and hot soups. It's very light, but it does immediately disperse. You don't get a big oil slick, because if you're talking about the garlic suspended in that oil, it's not held in a lot of oil.

I'm talking about using it in teaspoons and a tablespoon at the most. It just depends really what my plans are later for the evening.

SS: It also reminds me of mayonnaise, delicious and light. That is a wallop of garlic.

BB: It's just easy and on-hand. I feel like once you've made it, which really takes about 10 minutes total, you've got it.

SS: How long does it keep?

BB: Our recipe online said about 3 weeks, but I've let it go for a month. The only thing it does is condense just a little bit. It's not quite as fluffy, but still quite nice. Absolutely keep it in the refrigerator.