Chef Amanda Cohen: 'We need to keep women in the kitchen'

by Francis Lam
Listen: Chef Amanda Cohen: 'We need to keep women in the kitchen'
09:40 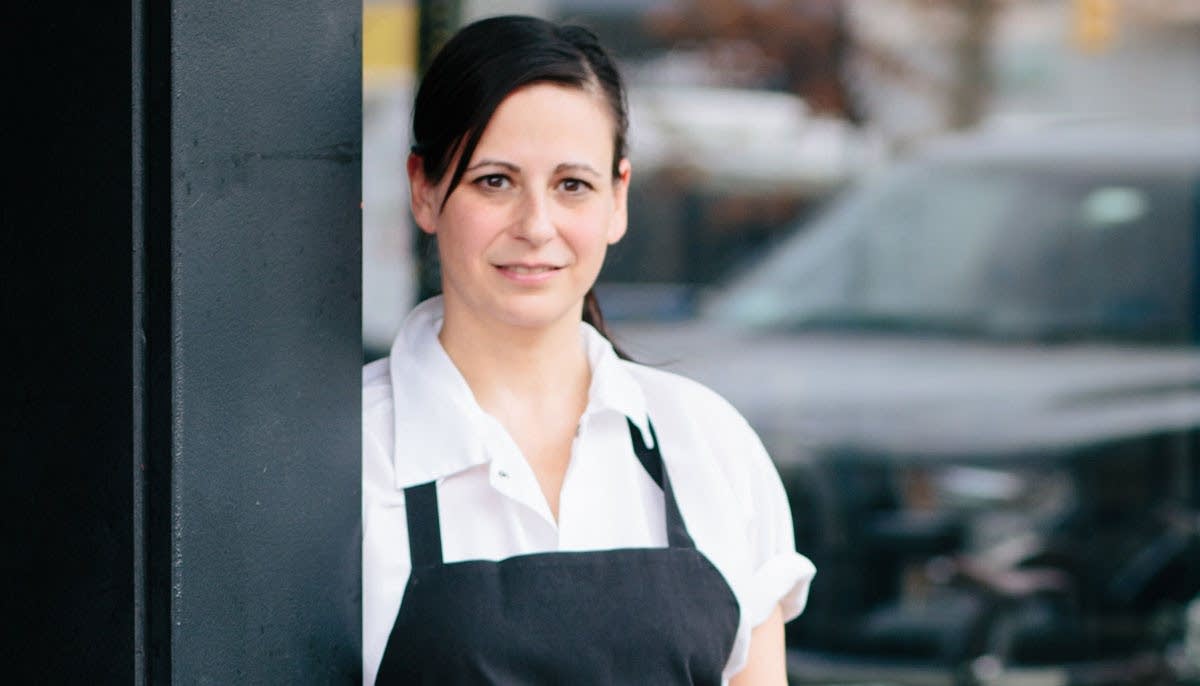 "We have a huge problem in this industry," says Amanda Cohen, chef-owner of New York City's Dirt Candy. "This is going to sound funny, but we're not keeping women in the kitchen. We need to keep women in the kitchen. They don't have to be barefoot, but they have to be in the kitchen." Cohen says the restaurant industry's lack of benefits like health care and maternity leave are why some young, talented, female chefs leave the field.

Cohen is a sharp-eyed critic of celebrity chef culture, the food media, and most pointedly, sexism in the food world. Last fall she took on Time magazine for its cover story "The Gods of Food," which did not include any female chefs.

Francis Lam: You are a busy person. You're still the kind of chef who is in your restaurant cooking every day, but you've taken a lot of time to research the history of women chefs and to write about it. I learned from you there was a woman named Eugénie Brazier who was the first chef to ever win six Michelin stars, which is huge. I'm pretty much a geek about this stuff, but I'd never heard of her. Why do you think women chefs have such a hard time getting recognition or attention?

I don't know why, from the get-go, the press didn't start writing about women; I can't go back that far in history. But I do know right now that they're still not writing about them.

FL: But you've said before that there's a distinction between being a working chef as a woman, and being the kind of chef the media likes to talk about. What does that mean?

AC: I think the media likes to focus on the young, brassy, outspoken chefs who have time to step outside their kitchen and network and meet people. Whereas a lot of the working chefs, we're in our kitchens every single night. There is no extra time to leave your kitchen.

Women tend to open smaller restaurants -- like the corner shops, mom-and-pop shops, ethnic restaurants -- and we don't have a lot of extra money to spend on PR. Without a big, huge publicity company pushing you out there, how is the press going to find you?

FL: Do you ever feel like you're treated differently because you're a woman?

AC: I sometimes do feel like I'm treated differently. I've run my restaurant for 6 years and we are very successful. It takes 2 months to get a reservation; we're opening a new restaurant. But even this past weekend, I had a very cocky, young chef mansplain to me how to be more successful, what I could do to get investors, how he was able to get investors. It's because I didn't try hard enough.

FL: You don't think he would've done that to another male chef?

AC: I think another male chef might've punched him. He's lucky I was a little tipsy.

FL: Is there a difference in your mind between male chefs and female chefs?

AC: No, not at all. I think we cook the exact same way. I hate this argument, when we start breaking it down, of who's a better cook: Do women cook more nurturing? Are men are more out-there, doing more modern techniques? No. Everybody cooks the exact same way.

Some people have the ability to try new things because they have restaurants that have more money behind them. They're able to take more chances, they can make fancier menus, they can do tasting menus. Again, women are opening smaller restaurants where they're not always able to take those chances.

FL: I feel like every few years there is a conversation that floats in some small corner of the media about this idea of gender in the kitchen. You've said you don't find the world of cooking to be "a boys' club." What do you mean by that? People think of it as being very male-driven, very male-dominated, and very testosterone-y.

AC: I don't think that there's a group of men who are ruling this industry and they sit in a lounge, smoking their cigars, saying, "I'm a male chef, and I'm going to make sure that no female chef succeeds because I want to stay on top of this."

I can't imagine that's what happens. Maybe it does and I just don't know about the secret society. I've never been invited, but I really don't.

FL: No one wants to win when they know they have a leg up.

FL: A friend of mine who is a woman in the food world once said to me, "I hate to say it, but the reason there aren't that many women chefs is actually simple." She said to make it as a chef, you usually have to devote your 20s, your strongest years, entirely to the kitchen. That's when many women want to have families. Maybe they have children, they decide they need more time with their children. Or, like what Sheryl Sandberg talks about, they start to think, "In a few years, I'm going to be out of this anyway," so they don't "lean" into it. What do you think of that idea? What can we do about it?

AC: I think that's totally true. We have a huge problem in this industry. This is going to sound funny, but we're not keeping women in the kitchen. We need to keep women in the kitchen. They don't have to be barefoot, but they have to be in the kitchen. This is a problem on the industry side -- a lot of the things I talk about are more in the press -- but for us, this is our huge problem. Most restaurants don't offer maternity leave. We don't have health care in the restaurant industry. It's starting, but it hasn't really happened yet.

This is something that we, as restaurateurs, have to figure out. How can we keep women in the kitchen? How can we let them go for 6 months or a year, however much time they want to take off, and then come back and have a decent life, earn a decent salary and be able to spend time with their kids?

This is something I think we're going to start figuring out. I think we're going to have to in the next couple of years, but we haven't had to. This has been an unregulated industry. What's happened is we've lost all this talent, all these great chefs have left in their 20s and early 30s, all these female chefs, and they haven't come back or they've gone to different parts of the industry. What we need to do is find them again and say, "Show us what you can do."

This is another one of my big issues, but food costs money. You're not paying as much as it costs to sit in my restaurant to eat that food. That's where we're going to start seeing this come out; as a community, we're all going to have to agree that our $15 salad might cost $20. The people who are making it, we have to decide if they're entitled to have the same rights we do as a consumer. It's a problem for everybody, but we are going to have to tackle it, or we're just going to keep losing people.

FL: Do you think there is a woman who's working as a chef today who's doing a really good job in putting herself out there in a non-gendered way?

AC: I think a perfect example is Alex Raij. She owns three restaurants in New York: Txikito, La Vara and El Quinto Pino. She's an empire-builder, she is a mother and she is putting herself out there all the time. I see her at parties, I see her at food events, she's networking, and people know who she is. She writes; she's always in magazines. She's the perfect person.

FL: She's really interesting, too. She's super smart and her food is terrific, but it's also an interesting scenario where she's co-chef in all of her restaurants with her husband and partner. It's an interesting thing where almost always when that happens, when there's a couple, it's the man who either gets the attention, or the man is the savory chef and the woman tends to be the pastry chef and is secondary because of that. But this is a situation where they are both co-chefs, both savory chefs, and yet people know her and talk about her and not him.

AC: Exactly. She has broken the mold in so many different ways.