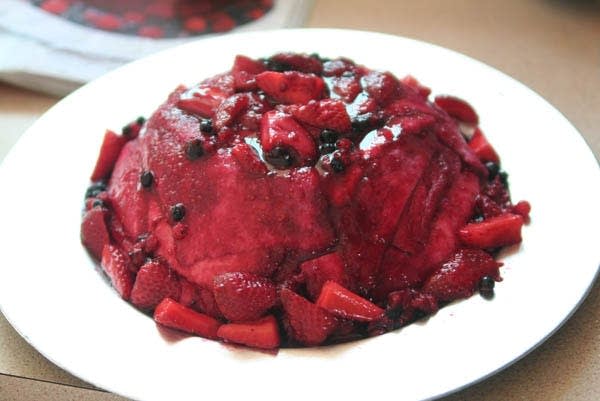 "It's sad to cook a perfect peach or a perfect nectarine," says Nigella Lawson, author of Nigellissima: Easy Italian-inspired Recipes. But some fruit, especially in the summer, is not quite ripe enough -- or is too far past its prime -- to stand on its own.

[Ed. note: Can't get enough of Lawson? Neither can we. On The Splendid Table she has previously talked about falling in love with Italy, the "shouty" boys on ABC's The Taste and why she refuses to be airbrushed in promotional materials.]

Lynne Rossetto Kasper: What summer fruits are you reveling in right now?

Nigella Lawson: This is a terribly English thing to say -- you wouldn't expect any less -- but for us, summer fruits mean summer pudding. I don't know if you have summer pudding in the states, but this is a mixture of any fruits that you can get. They can be past their best, which is useful for right now -- they've had the sun on them maybe a little bit too long. Red currants, black currants, raspberries, strawberries, maybe blackberries.

We line a pudding base and shape with, I'm afraid to say, generally pretty awful bread. It's white bread. You line a pudding base, then you lodge the bread against it. You fill it with this mixture of bruised red fruits, a little sugar, maybe a little teeny bit of lemon.

You put a lid on again with some bread. You put mini-weights -- a can of beans, it doesn't matter what -- and you leave it for 3 days. All the juices soak through the bread, making it scarlet. It's like a scarlet sponge. Then you slice it. It slices messily but deliciously, and you have it with cream.

Summer pudding has been going since the Victorian times. That's certainly my childhood and now my adulthood; it would be inconceivable to watch the late summer foods go by without it.

But for those who don't like to do anything as frightening as waiting for jam to set, I think there's still time to make fresh raspberry jam. It's so simple and so beautiful. You get equal amounts, just maybe a couple of cups each, of raspberries and sugar. Put them into two separate heatproof bowls in a 400-degree-Fahrenheit oven for 20 minutes.

Then you pour the sugar and raspberries together into a jug. The heat of the sugar on the raspberries turns it into a red molten river. It's jam that tastes so fresh. It doesn't last like proper jam, but believe me, that's never going to be a problem.

LRK: You would put it in the refrigerator then?

NL: I would, or just eat it very, very fast. When sugar and raspberries come together, it turns into this thick, ruby gravy. Then you just pot it. It's also very runny; it doesn't set like jam. It's fantastic on shortcakes or just stirred into a little lightly-whipped, unsugared cream.

There's something about it that is just delicious. But really, if you have some very good white bread and some good unsalted butter, a few teaspoons dribbled on top of that to me would be a very heavenly al fresco breakfast.

3. Whip it into a fruit fool

LRK: When I think of England, I think of things like damsons. What is a damson plum?

NL: A damson is a hard-work plum. It's a sourish plum with a stone, large, out of proportion to the flesh. It's not entirely easy to use, but the taste is magnificent. Often the fruit that is more sour, has the edge, has better taste.

For a damson, once you've almost left yourself bleeding thumbs trying to get rid of the stones, you've got an intense acid flavor, a slightly rough, textured puree; that will happen as you cook them very, very simply. That we would make a damson fool, which is just the sour fruit streaked through some softly-whipped cream and eaten out of a small wine glass. It is really delicious.

NL: You can, if you want to cut to the chase, just get a knitting needle or some such thing and just prick these plums all over. Then let them sit for a month or so in some gin. I'd rather eat than drink, but that's not everyone.

LRK: That sounds like an utterly brilliant idea. I can think of the jar I have at home that it's going to go into this afternoon.

You brought up an interesting point about acidity in fruit giving it a fuller, more complex flavor.

NL: One of the exciting things about the berries that are almost tapering off now is that some of them, even when ripe, have that edge of sourness. That's what gives complexity.

LRK: What about the stone fruits?

NL: I think it's sad to cook a perfect peach or a perfect nectarine. However, too many fruits are not perfect. I'd have a couple of choices.

I'd do what the Italians do -- you don't need me to tell you -- which is to slice up a peach and let it stand in a glass of red wine, which is delicious. I happen to love it in muscat too. I love the way Italians do that. I suppose it's not so far from the notion that the Spanish have with all those great jugs of their fruited red wines.

NL: I think there are certain pairings that inexplicably go well. For example, if I have a nectarine that is a bit unyielding and needs to be cooked before it has proper flavor, for some reason the nectarine always goes well with blueberries. I'm quite happy to make a nectarine and blueberry cobbler.

Blueberries by themselves are not interesting enough. They need another fruit, they need sourness. If a nectarine is too sour to eat uncooked, that makes good use of it.

NL: I'm perfectly happy to get a few oats, a bit of ground almonds and maybe some sliced almonds, stir in a bit of brown sugar and melted butter, pour that over some sliced nectarines and a tumble of blueberries, and bake that. That's a rather fantastic late-summer pudding. It's something that could be eaten outside with maybe some good vanilla ice cream.