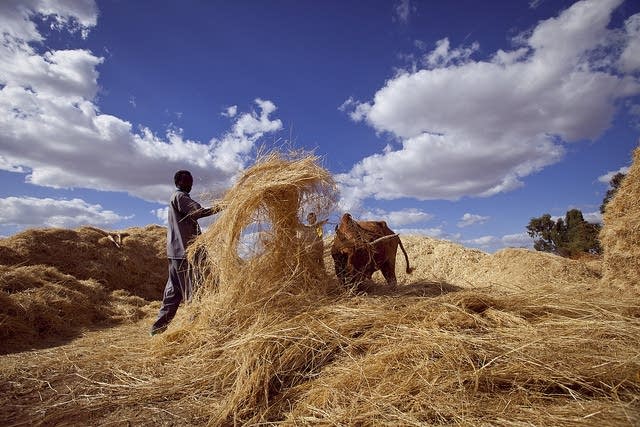 Chef Daniel Klein and camerawoman Mirra Fine of the weekly, online documentary series The Perennial Plate travel the world learning -- and filming -- how people really eat in their home countries. In Ethiopia, they learned about farming teff.

Lynne Rossetto Kasper: You've been in Ethiopia. What did you find there?

Daniel Klein: This is the last of a series of trips that we've been on; 12 countries in 14 months. We have a show that is about food and the wonders of food, and we thought finishing with a country that has had so many challenges is an interesting way to end and put things in perspective a little bit.

Mirra Fine: All that being said, we also love Ethiopian food -- specifically injera. It's a bread that they eat three times a day for all their meals. It's super sour. It's spongy. It's made on this big, iron hot plate. The bottom is really smooth and the top is very porous. Ethiopians will put dollops of stews on top, and the porous part of it will soak up the stews.

MF: It's used like a plate and a utensil and you also eat it. Injera is made with a type of cereal that grows in Ethiopia called teff.

DK: We ended up going to these different teff farmers' homes. These are extremely poor people, but so generous. You come in, and first they prepare you coffee and do this beautiful ceremony for you. Then before filming anything, they want you to eat. They make this meal for you.

MF: No one tells you that this is going to happen.

DK: They are making the fire with cow dung. Right after that, it’s customary to feed your guest with your hands. So this lovely woman who has just been playing around with cow dung then puts her fingers into your mouth.

LRK: That idea that you share food even when you almost have nothing.

DK: It's a wonderful and sad truth of the world that people who have nothing are willing to give you whatever they have. That has never been more clear than in these homes in Ethiopia.

LRK: Teff is a grain that is the size of a grain of sand.

DK: It is. It's like amaranth, but way smaller.

It’s a grass and they grow it in the fields and cut it. They put it in a big pile. Then they take their cows and they walk over it over and over again. The cows are knocking the grain off of it. They throw it in the air and the seeds come down.

LRK: The seeds come down because they are heavier, and the chaff blows away.

DK: But they are so tiny, so the amount of work that goes into it is just extraordinary.

A really interesting thing about growing teff there and talking to these farmers is that there seemed to be a big fear of a repeat of famine. We're often looking for people who have an individual point of view, a passion. That was really hard to find in Ethiopia because there's not the level of education, and these farmers have never been asked, "Why do you farm? How do you feel about farming?" That’s just not something that is thought of. It's, "I'm a farmer. That’s what I do. That’s what I have always done."

LRK: You face famine and you've lost crops. You’d use every tool that you can lay your hands on.

LRK: They can't harvest those and just replant them the way that farmers traditionally have done?

DK: I think they are encouraged to use the improved seeds that the government is selling them, but they have to buy those seeds. This one farmer was doing quite well, but his only debt was to the government for the seeds and the pesticides. They were placing their faith in this new system, and the old system perhaps had failed them as well. So it was understandable -- completely understandable.

LRK: What you found was the reality of a country.

LRK: This was your last trip; 12 countries, 14 months. How do you feel about what you've experienced?

DK: After traveling to all these countries, I think we felt pretty inspired. When we were about to leave, everyone had their fears that they wanted to put on us about sickness, robbery, all these things. You visit 12 countries. You spend all these months going to people’s homes. We never got robbed. We got sick one time from a tourist restaurant.

MF: I got fleas in Ethiopia. It was my own fault.

DK: We never experienced anti-Americanism. We had this wonderful experience in which we were able to connect with all these people. We were just going to someone else’s home, and to experience that was just a once-in-a-lifetime, inspiring experience.

MF: It's great to see outside the bubble that you live in. I hadn't traveled very much at all before I started on this huge 12-country adventure. It makes you appreciate what you have and see people differently: interesting, unique and equal. It's just a wonderful experience that I hope lots of people get to do.