When I was a kid, I used to see this ad on TV: buffalo grazing, village ladies pouring pearly white milk into copper pots. It’s the Indian version of the "Got Milk?" ads.

India is home to most of the world's water buffalo. As a kid, I drank buffalo milk instead of cow milk, and let me tell you, it's disgusting -- oily and sickly sweet.

As much as I hate the milk, though, I couldn't get enough of the stuff it was turned into: ghee, which smells like warm sugar, or cool, pillowy curd eaten after a spicy meal. I moved to the U.S. decades ago, and I've been looking for that rich buffalo taste ever since.

"Buffalo milk is really the fourth milk, right?" says Rob Kaufelt, the owner of Murray's Cheese in New York City, a popular store that now sells gourmet dairy products in several states. "Most of what we sell is cow, sheep and goat. Every now and then, somebody tries to sell camel milk, yak milk, human breast milk, or whatever it is that's hot that week. Of course, that never works. But buffalo milk, that is obviously the real thing. Nobody has been that successful in making it viable here yet."

It turns out, there is no amazing buffalo milk product made in the U.S., because there's just not enough buffalo milk to make one.

"Water buffalos are the divas of the dairy world," says Julia Collins, who also works at Murray's Cheese. Collins knows all about these divas -- she used to live on a buffalo dairy in Italy. "They don't have sweat glands, so they laze around in the mud all day. If you want to take milk from a water buffalo, she has to be under the right conditions. She has to be nuzzled. When a water buffalo sees a stranger, she might stop giving her milk. That's how sensitive they are."

Also, buffalo produce way less milk than cows. They're more work, less profit. A handful of American dairies tried and fizzled out. How could anyone make a good business out of this?

Steve Smith runs a buffalo dairy in Cañon City, Colorado -- the largest in the country, and the only one that's doing well. He bought his buffalo 5 years ago from a Texas ranch. It was hard work, he says, but now he's milking 100 of them and selling all the milk to a big cheese manufacturer.

The secret to its success is guys like Brady Shupe, an inmate of the Colorado prison system. The prison runs this dairy, which looks like any old dairy, except it's fenced in with razor wire. Inmates are paid less than regular workers, so Smith can afford to hire a whole lot of them. He needs them because buffalo are a lot of work.

"Cows are much easier," Shupe says. "They drop their milk real easy. These you have to actually milk them out by hand with the pumps."

But how could a regular dairy make it -- one that doesn't have prison connections, and isn't staffed with hard workers like Shupe?

Like me, Raffaele Mascolo grew up in a place with lots of buffalo. He is from Caivano, Naples, in Italy.

"Louisa, Maria, Angelina, Maria Bella, Pia. Believe it or not, when it's time, call them by name and they come to be milked," he says.

Italy has plenty of buffalo milk, so Mascolo, who is a cheese consultant in the U.S., had this idea: Why not just skip the hassle of running a buffalo dairy in America? Why not just get the milk from Italy?

It's "a big operation," he says. "It's a very delicate milk, rich. It comes from the region of Campania."

The buffalo milk is evaporated in Italy, frozen, and then shipped to a cheese factory in Secaucus, New Jersey.

"What we do here, we put water back, filter it, so we regenerate the milk, and this becomes like a fresh milk," Mascolo says.

The fresh milk is cultured in giant metal tubs. The hunks of curds are then melted with jets of hot water and stretched. There is a sheet of marshmallow-like paste oozing out of the machine: fresh buffalo mozzarella. It's cooled and shaped into little balls and embalmed in brine.

Mascolo says his cheese will be fresher and cheaper than the fancy imported stuff. It's a multi-million dollar project. His master plan? "Go after [the whole] United States," he says.

If it works, it would be the first American-made buffalo product to go mainstream. It could open the door to other products.

Of course, we sat down to taste this fresh mozzarella. "[It's] very similar to the product that I remember growing up, because the milk is the same," Mascolo says.

I'm Indian, so I didn't grow up eating mozzarella di bufala. But what I really love here is watching Mascolo close his eyes and savor that memory of being a boy, and eating hunks of silky, white mozzarella di bufala. I may not find the buffalo yogurt or buffalo butter of my dreams here, but maybe I can just make do with finding people who share my dreams of buffalo.

This story was co-produced by Andrea Chalfin. 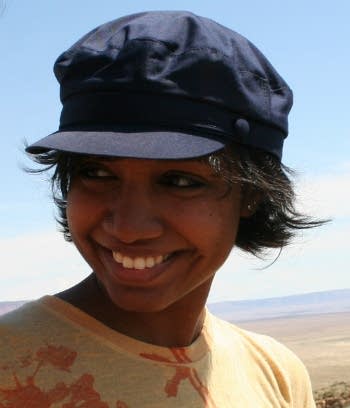 Sruthi Pinnamaneni is a freelance radio and video journalist based in New York and Vienna. Her work has appeared on various shows, including Marketplace, Freakonomics, Radiolab and Studio 360.