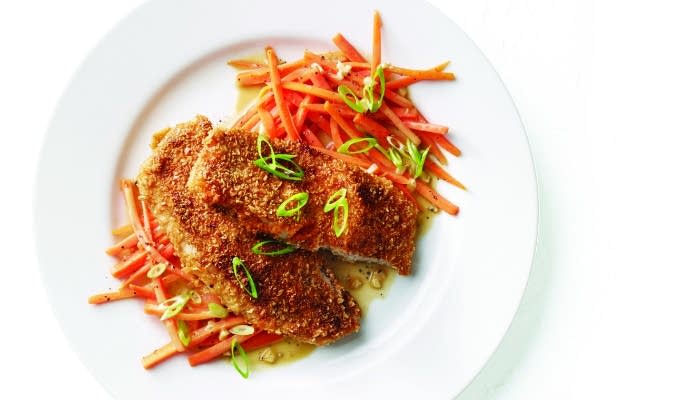 It's 6 p.m., hunger has taken over, everybody's cranky, and there are only odds and ends in the refrigerator. Enter Lynne Rossetto Kasper and her culinary supper game, Stump the Cook.

How It Works: You tell us about five ingredients in your refrigerator, and Lynne has to come up with a dish that you could make. In her dish, Lynne gets to use salt, pepper, one type of fat and three additional ingredients the challenger has on hand.

The Player: Karl Vogel from Lincoln, Nebraska, is a married father of three who loves to cook. He works nights, so he's often not home on weeknights for family dinners. Karl is a fan of TV cooking shows, something he shares with his twin 9-year-old daughters. As of late, Karl has been focusing on healthy dinners the family can finish in the oven -- or better yet, in the slow cooker -- so he can catch a nap while the kids are in school.

Karl's Challenge to Lynne: "All the things my wife picks up at the grocery store certain we can use, and somehow we never do." Tilapia filets + Rolled oats + Baby carrots + Almond butter + Garlic

Carrots: Quarter 2 pounds baby carrots into sticks. Toss them over medium-high heat in a wide skillet with extra-virgin olive oil, salt, pepper, about 1 cup of water and 2 tablespoons vinegar. Cover and cook slowly until nicely tender. Halfway through cooking, stir in 2 tablespoons of minced garlic. When the carrots are done, remove the lid and boil off any remaining liquid. Then blend about 4 tablespoons almond butter with 1/4 cup water. Stir into the carrots and spread them out on a platter.

Tilapia: Rub six tilapia filets with sriracha and chill 20 minutes. Whirl 3 cups oats with some salt and pepper in a blender for two seconds until crumbly. Spread the oatmeal mix on a large plate. Beat three eggs in a shallow bowl. Film a big skillet with olive oil and heat over medium-high. When the oil is shimmering with heat, dip the fish fillets in the egg wash, then dredge them in the oatmeal. Gently place them in the skillet, being careful not to crowd (you may need to cook them in batches). Cook them until they are golden brown on each side -- about two minutes per side. Then arrange the crispy fish filets over the carrots and serve with a scattering of sliced scallion tops (though not one of the allowed ingredients!).

Karl's Response: "The recipe was just the kind of dish I'd order in a restaurant."

This Stump the Cook was produced in collaboration with the newspaper magazine USA Weekend.