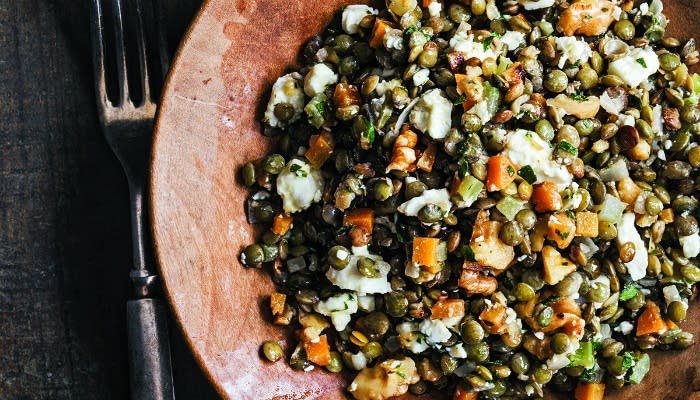 Some people only know lentils as brownish-gray disks that got boiled to a mush in those soups everyone ate during the hippy-dippy 1970s. But their reputation has suffered enough indignity, and some enterprising team decided to rescue lentils from health food store bins by rebranding fancy lentils as "caviar" or "beluga" in an attempt to elevate their status.

It seems a little silly to me to try to bestow such regal grandeur on a humble legume, but I will concede that French green lentils are worthy of caviar-like adulation for their superb flavor and texture, and their ability to hold their shape when mixed into a salad. Normally I avoid calling for very specific ingredients in recipes, but in this case, the lentils from Le Puy, cultivated in south-central France, are truly the best. I've tried using other French green lentils, and while they taste fine, they don't retain the same subtle crunch as the Le Puy lentils. They're not as hard to find as caviar, nor as expensive, and though it may take some fishing around, do try to find them. If you can't, other French green lentils will do. Just be sure to taste them before the end of the recommended cooking time, as they tend to cook faster. You want them to retain their shape in the salad and still have some bite. Don't use the large green (or other colored) lentils you might use for soup--they tend to get mushy very quickly.

This is my number-one, go-to salad, and I make it frequently because it's fast, easy, and keeps well for days. You will get to test out your knife skills when making the mirepoix, a finely diced mix of onions, carrots, and celery. In an ideal world, you want the pieces the same size as the cooked lentils.

If lentils are the caviar of the legume world, then I am going to go out on a limb and say that walnut oil is the Champagne of the oil world. It's pricier than other oils, but just a small amount permeates whatever you drizzle it into--most notably salads, infusing them with the nutty aroma and flavor of walnuts. Walnut oil is sold in small bottles because it doesn't last long. I get mine from a producer at one of the marchés des producteuers, where weathered farmers from across France come to sell their homegrown foodstuffs directly to the public. And although some people might be more interested in caviar and Champagne, I'm content to lavish lentils with freshly pressed nut oil, which get the royal treatment in this unpretentious salad.

1. Rinse the lentils and put them in a saucepan with plenty of lightly salted water, the bay leaf, and the thyme. Bring to a boil, decrease the heat to a simmer, and cook for 15 minutes. Add the finely diced vegetables and cook for another 5 to 10 minutes, until the lentils are tender; be careful not to overcook them.

2. While the lentils are cooking, make the dressing. Mix the vinegar, salt, mustard, oil, and shallot in a large bowl.

3. Drain the lentils well and mix them into the dressing while still warm, stirring to coat the lentils. Remove the bay leaf and thyme and let cool to room temperature, stirring occasionally.

4. Add a few grinds of pepper and mix in the parsley, nuts, and goat cheese. Taste, and add additional salt, if desired. I serve the salad at room temperature or warm. If served warm, omit the goat cheese, or crumble it on top at the last minute, so it doesn't melt, but just softens slightly. The salad can be made up to 2 days ahead and refrigerated. Let it come to room temperature before serving; it may need to be reseasoned after having been refrigerated.

Reprinted with permission from My Paris Kitchen by David Lebovitz, copyright (c) 2014. Published by Ten Speed Press, an imprint of Random House LLC.