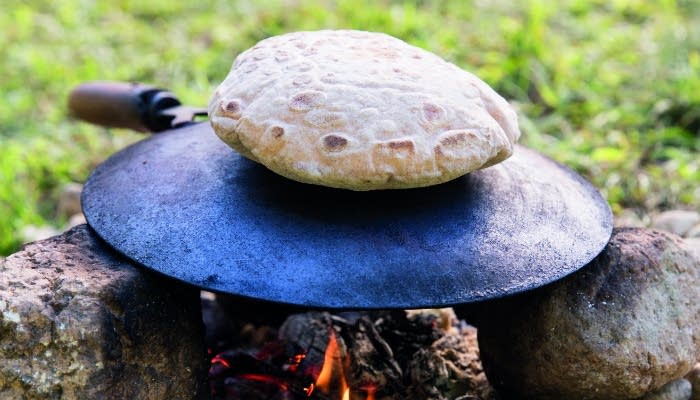 Recent research suggests humans started cooking with fire nearly 2 million years ago. Drop a flat rock into the fire, and before you know it, you have a cooking surface for pita, tortilla and focaccia. Many of the flatbreads we know today are "from one idea that just diffused over thousands of years," says food historian and former archaeologist Paula Marcoux, author of Cooking with Fire. She recreated a flatbread recipe from artifacts that were found in cremation burials in Scandinavia.

Rebecca Sheir: You are a food historian, but I understand you also have experience as an archaeologist and a bread-oven builder. How do you feel those avocations informed your writing as you put this book together?

Paula Marcoux: It was through archaeology that I first got to travel and see people baking in ways that seemed amazing and strange to me. I also got to dig up baking installations that were strange and unknowable.

It was as a baker that I began to mess with using different technologies and started to build them. I was trying to understand how people in other countries even today bake in unusual ways to us in the west, also how people used to bake in some ways that are entirely gone by now.

RS: In a section of the book, "Cakes on the Grill," you talk about how baking technologies developed to suit the grains available. They went hand-in-hand in terms of gluten and non-gluten. Can you explain that?

PM: For the last 10,000 years or so, people have been developing wheat to have more and more gluten in it so that it behaved well for bakers. The diffusion of that baking technology was carried out by nomads who were carrying griddles over the deserts and plains with them. They were baking flatbreads on these griddles. If they were traveling, they had no place for a big built oven installation, so baking on a griddle was most suitable for their way of life. These traveled all over the place. That griddling technology went with wheat, and nice, stretchy, big flatbreads came along with that.

In places that are colder and damper, wheat doesn't grow well. Grains such as rye and oats do much better on a griddle as a crunchy, little flatbread like you might find in Scandinavia or oat cakes you might find in Britain. It's a very different approach that’s determined by the type of grain that’s used in it. The griddle is a very simple baking technology that makes a flatbread.

RS: Is there a particular kind of flatbread that people should try to cook on their griddle?

PM: The simplest thing, and something that people are already so familiar with, is pita. Once you start making pita at home, you will never, ever buy them again because they are easy to make. They are addictive to make -- they are so much fun. Children can make them. The flavor that you get when you are using high quality wheat, whether it is whole wheat or white, is incomparable to pita you can buy.

RS: What makes them so fun to make?

PM: Just the process of getting them to puff up is the addictive part. You flip them back and forth a few times so that the pita forms a little bit of a crust on the outside. That's enough to trap the steam inside and puff the sides apart. It puffs up like a little beach ball on your griddle. That is really a very compelling type of baking to do.

RS: You have tons of recipes, but one of the most fascinatingly named is the Protohistoric Multigrain Flatbread.

PM: Yes. That is goofing on other archaeologists and our propensity for long names for things. It was given such a name because it's based on archaeology entirely.

It's not very appetizing-sounding, but it comes from artifacts that were found in cremation burials in Scandinavia. These are basically corpses that have been burned, but with grave goods. Sometimes these grave goods included flatbreads. In fact, very often, as an offering with the dead person.

When things are burned, they are often partially burned, lightly carbonized, and that preserves grain extremely well. Archaeologists have been able to determine exactly the components and shapes of these flatbreads, which I found entirely fascinating. Once I'd learned what types of grains they were made of, the types of fats that were in there, the shapes of the grains, the shapes of the flatbreads, there's nothing more to it -- that's basically a recipe.

I picked out a few of my favorite combinations and made them. It turned out they were really delicious, they keep very well and they are fun to make. You can leave a little hole in the middle, string them up and they keep for ages -- that's how people in Scandinavia used to keep their grain crop. If they kept the grain in its own natural state, it would go moldy or get mildewy. But if they made it into bread right away and then strung it up in their houses, it would keep for the entire season until the next harvest time.

RS: Flatbreads have become really universal. Can you give examples of the different kinds of flatbreads around the world?

PM: It's really a staggering array. They diffused from central Turkey, from Anatolia, north, south, east and west. The same layering of bread with fat that went eastward to become what has come to us in Chinese restaurants as scallion pancakes went westward and was layered with fats and other ways to become everything from Italian pasta to borek in Slavic countries. It went back east again to become wonderful flatbreads on the subcontinent of India, Pakistan and south Asia all the way to Indonesia and Malaysia.

All these breads -- they are a fabulous array of flavors and textures -- they all come from one idea that just diffused over thousands of years. It's really not even known how long, but probably close to 10,000 years.

The flatbreads of Scandinavia may have developed entirely independently. Northwestern Europe had such a different grain tradition. These breads are really just lightly ground-up grains mixed up with some fat and some water, rolled out flat and then baked on a hot stone that is heated up over a fire or coals. Later on, only really quite recently after the Industrial Revolution, it was heated over an iron griddle. People in some parts of the British Isles still use bakestones. There are still bakestones and literal stones used in Scandinavia for this purpose.