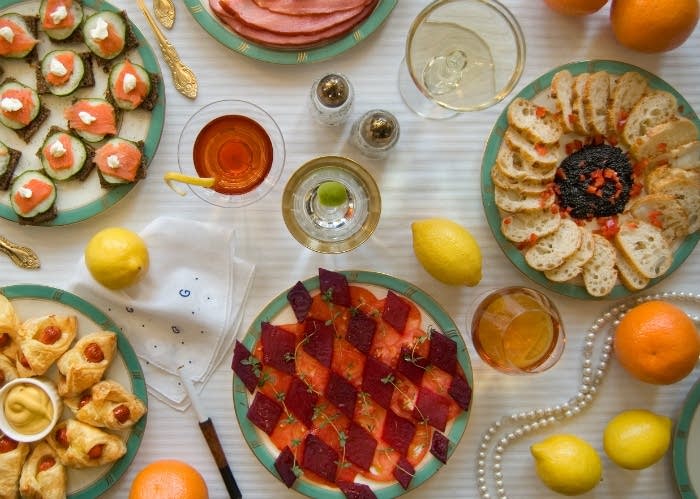 In Fictitious Dishes: An Album of Literature’s Most Memorable Meals, designer, writer and amateur table-setter Dinah Fried brings 50 iconic food moments from literature to life. What started as part of her graduate thesis at Rhode Island School of Design became a book with 50 photographs of memorable meals.

Jennifer Russell: How did this book come to be?

Dinah Fried: This book began as five photographs, which I created as part of my graduate thesis while studying design at Rhode Island School of Design. All of my thesis work explored the design of literature in one way or another; I was working to interpret and visualize novels and other stories, and aimed to unveil fresh ways of understanding and appreciating the things we read.

After taking these initial photographs -- Oliver Twist (gruel), The Catcher in the Rye (a cheese sandwich and a malted milk), Moby-Dick (clam chowder), Alice’s Adventures in Wonderland (tea) and The Girl with the Dragon Tattoo (an open-faced sandwich and coffee) -- I was totally hooked, and wanted to do more.

Luckily, other people seemed to like them as well -- both people I knew and strangers who saw them online. Several people online thought Fictitious Dishes was a book. I took that as a sign, put together a quick proposal and luckily had a pretty easy time getting a book deal with HarperCollins.

JR: How did you choose the novels you represented in the book?

DF: The dishes in Fictitious Dishes are a mix between iconic ones -- like the chowder from Moby-Dick, the tea party from Alice in Wonderland or the gruel from Oliver Twist -- while others come from small moments in the book, which evoke a sense of ambiance, time and place.

I began choosing the titles based on my own reading memories, but was quickly bombarded with requests and suggestions from family, friends and even strangers. The book has a mix of lots of people's favorite food moments.

JR: There are 50 photographs in the book. What is the process of making those photographs?

DF: The entire book process (research, writing, shooting, designing, etc.) took more than a year, but I shot the bulk of the photographs over the course of a 5- to 6-month period.

For the hunting and gathering phase, I'd generally focus on several dishes at once -- searching for props for about five or six photos at a time. When it came to the cooking, styling and shooting steps though, I'd definitely focus on one meal at a time. Juggling the food prep, set up and photography took a huge amount of focus, so throwing another dish into the mix would have been a huge challenge.

The treasure hunts for props were among my favorite parts of making the book, but they were often quite challenging. One of the more difficult things was finding varied surfaces to shoot on. I’d find myself picking up discarded pieces of wood or Formica from the sidewalk on trash day, and looking at every piece of fabric wondering if it could pass as a tablecloth.

I often had a specific image in my head for a plate or cup, and it wasn’t always easy to find something that matched. For the Gatsby photo, I wanted to use plates with highly geometric, Art Deco patterning in gold, but I was never able to find anything even close to what I imagined for an affordable price. I ended up with some less-distinctive but pretty gold and green plates, which work fine, but I still feel a pang of disappointment whenever I look at this photo.

For the Moby-Dick photo, I really wanted to include a glass-bottomed pewter beer stein (though this detail wasn’t even mentioned in the book). I didn’t take the photo until I found the right one; my dad ultimately found one hidden in a box in his basement.

The Fear and Loathing in Las Vegas photo called for a "Gerber Mini-Magnum -- a stainless-steel hunting knife with a blade like a fresh-honed straight razor.” I spent a lot of time trying to track one of those down online in vain.

It’s also quite difficult to find a single matching set of silverware, who knew?

JR: Can you talk about the perspective of your photographs? They’re all shot from above.

DF: In addition to the obvious appeal of combining books and food, this provided me with the unusual opportunity to adopt the point of view of the fictional people about whom I loved reading. By shooting the meal from above, I felt as if I was, in a sense, seeing through the eyes of characters like Anne Shirley, Sal Paradise and Leopold Bloom, and in turn, giving the photographs' viewers the chance to do that as well.

JR: Was there a photo or photo shoot that stood out as the most difficult of the bunch?

DF: Several of the meals were very daunting to cook and style, specifically those with ornate descriptions of feast-like spreads: The Great Gatsby, Gravity’s Rainbow and Madame Bovary to name a few.

Madame Bovary was definitely the most challenging. Gustave Flaubert writes about “a dungeon of Savoy cake, surrounded by many fortifications in candied angelica, almonds, raisins, and quarters of oranges; and finally, on the upper platform a green field with rocks set in lakes of jam, nutshell boats, and a small Cupid balancing himself in a chocolate swing whose two uprights ended in real roses for balls at the top.”

Creating a swing out of chocolate with roses as the poles and then getting a little cupid to balance on it -- that took much longer than I care to admit. Luckily, my mom was my sous chef for this one, so I wasn’t totally alone in the process.

Jennifer Russell is a founding producer at The Splendid Table. Before coming to radio, she made historical and arts and cultural programming for public television. She claims to have come out of the womb a food lover -- when other girls played house, she played restaurateur. Follow her comings and goings on Twitter: @jenejentweets.
Eliot's Breakfast Parsnips
Chicken Kati Rolls
Lentil Soup with Bacon and Cilantro
Longevity Noodles with Ginger Chicken and Mushrooms