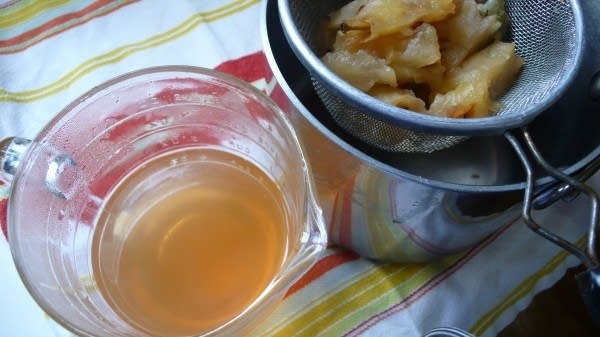 A recipe for your reclusive cores.

Agrodolce is an Italian sweet and sour sauce. Here, we reduce sugar and vinegar with apple cores, for delicious, intensely-concentrated essence of fall. Agrodolce plays well with meats, along with the less obvious uses we play around with here.

Fill a small saucepan with the cores of 10 apples. There is no need to remove any of their seeds or stems. Add sugar, the bay leaf, and then add the vinegar and water. The surface of the liquid should be above or nearly cover the apple cores. If it doesn’t, choose a smaller pot.

Cover the pot and bring the contents to a boil. Once boiling, reduce the heat to medium low and simmer, covered, until the cores appear bloated and translucent, about 45 minutes.

With a fork or a pair of tongs, lift the cores out of the now golden liquid, placing them in a strainer that is resting over a bowl. Measure the liquid that remains in the pot, so you have a gauge for how much longer it should cook.

Place the liquid back in the pot, and add any liquid accumulated from the strained cores. Turn the heat to low and reduce the agrodolce, uncovered, until it measures 1 cup.