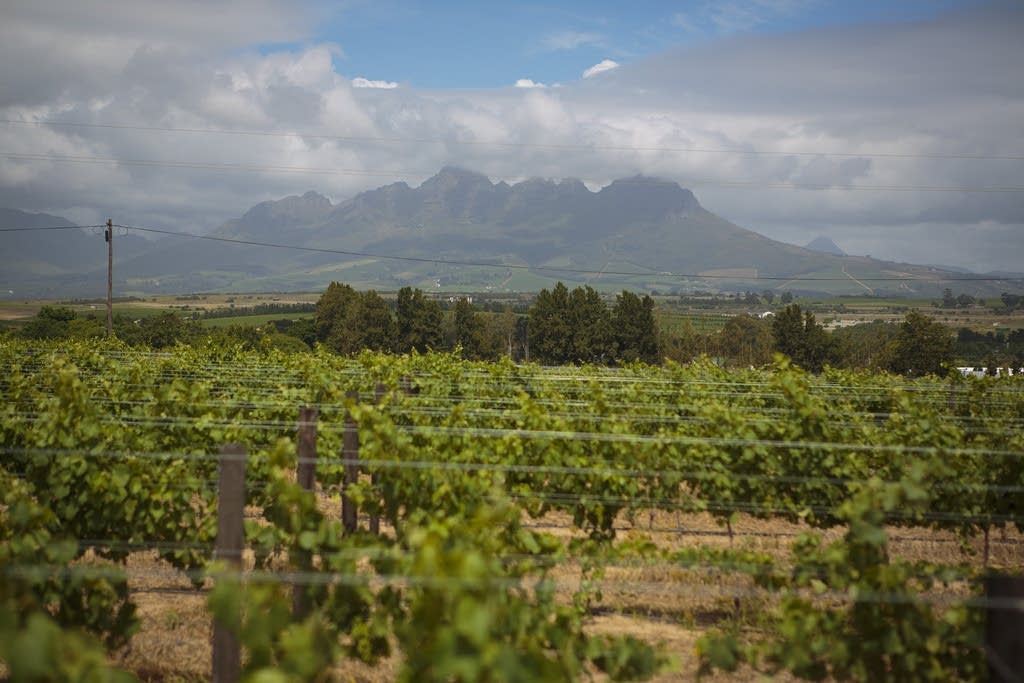 Chef Daniel Klein and camerawoman Mirra Fine of the weekly, online documentary series The Perennial Plate travel the world learning -- and filming -- how people really eat in their home countries. In Stellenbosch, South Africa, they learned about biodynamic farming and winemaking from Johan Reyneke of Reyneke Organic Wines.

'Our winemaker almost got eaten by a shark'

Lynne Rossetto Kasper: Where have you been?

Mirra Fine: We just came back from South Africa. We spent 2 weeks there, traveling from the north to the south, filming stories.

Daniel Klein: It is just a gorgeous country with every sort of landscape. It's incredible.

Going to South Africa, we really wanted to represent the diversity of the country. It's a country that is full of stark contrasts: wealthy people, poor people. It's a very divided and difficult-to-navigate country. We wanted to share a bunch of different perspectives, from the poor townships to the wine country to the village life. We ended up filming four or five stories, which is more than we usually do.

MF: One story that stands out is we were in wine country, in Stellenbosch, which is about an hour outside of Cape Town. We filmed this biodynamic farmer and winemaker, Johan Reyneke, who also was a former semi-pro surfer. We started out the filming surfing with him.

DK: We were like, "We get to go surfing? That sounds great!" We started off early in the morning and drove up the west coast of South Africa. It has just beautiful coastline, kind of like Big Sur, Calif. You're looking over the edge of the cliff and you see whales, dolphins and all this wildlife down below. We hired, for the first time, an extra cameraman who was an underwater cameraman, a professional surfing cameraman.

They have shark spotters because there are a lot of sharks in South Africa. Up on the cliff, they have a guy who sits there all day and just watches for sharks. While they were in the water and while I was just going into the water, a 3-meter long shark was spotted. We all had to run out of the water. That's a 9-foot shark.

MF: Two meters away from our guy.

DK: Our winemaker almost got eaten by a shark.

'It's just grapes and time'

LRK: This is not a good thing. What made him so interesting to you?

DK: There was this surfing bent, but I think the biodynamic thing is really interesting for us. He had a good way of explaining it.

MF: I haven't understood it for a very long time, and I've met with other biodynamic farmers before. How he explained it to us was if I had a piece of paper that I wanted to get rid of, I could either throw it away in the garbage can, and that would be waste. If I were a sustainable farmer, I could recycle it. But if I'm a biodynamic farmer, I put it through a shredder, feed that to my earthworm farm, and then take those earthworms and put them back into the soil.

LRK: What kind of wines does he make?

DK: He has a number of different grapes, so he's not committed to one varietal. There is the famous wine in South Africa, which is pinotage. He grows that, but he also does a sauvignon blanc.

He's someone who takes these grapes -- he does not put in any extra things to help ferment them, he uses the natural yeast on the grapes. No chemicals, no nothing. It's just grapes and time. He's doing his wine in a completely natural way.

He's also really proud of his staff -- he takes them in in a similar way. He introduced us to each member of the staff and shared what their value to his farm was. He's taking the best of what each thing has to offer, including the people.

'Mandela asked about him in his own language'

MF: The other interesting thing about him was that he started out as a farm worker, which is very unusual in that area. He's Afrikaner, which means his family is originally Dutch, years back.

When he was on the farm, he said he was the only white person who was a farm worker. Eventually, he was able to raise money and start his own farm. He wanted some of his fellow farm workers to own the farm with him, but they were worried about the risk that would go into it. He ended up doing it himself.

DK: But he did bring on those people, the farm workers who he had joined with to start this farm, whose knowledge he wanted to have as part of his farm. They would work toward everyone having a house.

He told us about the time that he was able to meet this hero; he was apparently introduced and struck for words. Nelson Mandela said, "What do you do?" He said, "I'm a farmer."

Then the incredible thing that Nelson Mandela did, he switched into the language of the oppressor, which is Afrikaans. He switched into this man's language and said, "How are our farmers?" Johan was just unable to speak. Here was this man who could have had this hatred toward him, instead, Mandela asked about him in his own language.

We were sitting around his kitchen table, tasting these wines, as he told us this story the day before Nelson Mandela died. It was really moving.

The reason he got to meet Nelson Mandela? Because he had chosen to include his farm workers and buy them houses as part of their business plan of having ownership. They were basically in debt and about to go out of business and lose everything.

This woman who was organizing an awards ceremony for African journalists was looking to buy wine for this huge event. She happened to show up at his farm -- she was going around Stellenbosch tasting wines. She asked him, "You look kind of down?"

He explained how he was trying to help his community and provide good living wages as well as homes for these people, but they weren't able to sell their wine. She proceeded to buy all of their wine for this huge event. Then he goes to the event and meets Nelson Mandela.