A brewing controversy over white tea: Is it defined by provenance or processing? 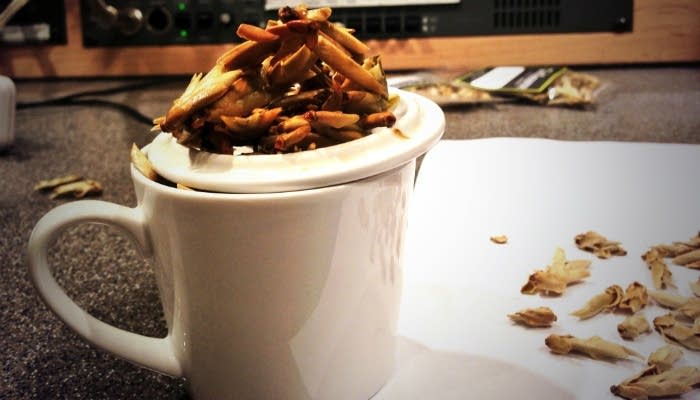 White tea, the lightest of all tea, is exploding in popularity. But it's also steeped in controversy.

"Up until 15 years ago, 97 percent of the white tea in the world came from three little villages in the northern Fujian province of China," says TeaSource's Bill Waddington. To meet increasing demand, white tea is now grown worldwide. So is it still white tea?

Lynne Rossetto Kasper: I've been hearing about white tea. Is this a gimmick?

Bill Waddington: White tea is definitely not a gimmick. It's really hot right now. It has grown in popularity tremendously in the last 2 to 4 years or so. It's interesting because there's a huge controversy about white tea right now.

LRK: What's the controversy about?

BW: You have to remember a little bit about white tea for context. It's one of the six categories of tea, and it's the lightest of all teas. It's very soft, delicate, gentle and subtle with a little sweet flavor to it.

Up until 15 years ago, 97 percent of the white tea in the world came from three little villages in the northern Fujian province of China. Then America and Europe discovered white tea, even though it had been around forever, and these three little villages could no longer meet the demand for white tea by any stretch of the imagination. So white tea started being grown all over other parts of China and eventually all over the world.

This led to a conundrum: Is it really white tea if it's not from where white tea was originally developed, if it's not from those same cultivar plants? It's very similar to the issue that popped up in the alcoholic beverage industry with Champagne. Is the product defined by geography, or is it defined by the processing and the end result that you get?

LRK: The people who are growing it in other parts of the world, are they using the same cultivars, the same tea plants?

BW: Originally they did. They took cuttings from those plants in those three little villages in Fujian and they would bring them to other parts of China. They would bring tea masters with them to show them how to make it.

LRK: What is white tea?

BW: It depends to whom you're talking. I am a believer that the tea is defined by the processing and not the geography. That's how all other categories of tea are defined -- by how they process the leaf after it's plucked and the end result in the cup. That’s what makes a tea a tea.

White tea is the least-processed of all tea. It has very minimal processing. Basically it is produced by letting the tea wither, then letting the leaf dry and then maybe a little shaping of the leaf. That's white tea. Very, very little is done to the leaf.

LRK: Is the leaf dried naturally in the sun?

BW: Typically they will do what's called withering the leaf with solar withering in the sun for a matter of days, which is very unusual. Most tea categories are withered a matter of a few hours, usually indoors. White tea is typically withered over a matter of 2-5 days.

Then they do apply gentle heat from a man-made source, whether it's electric heating tunnels or firing it in big, gigantic woks. They apply some heat to pull more moisture out of the leaf and to kill any enzymes in the leaf so it doesn't mold and break down. But compared to any other tea, it's very minimal processing. It's almost just the raw leaf with a little bit of drying and heating done to it.

LRK: So black tea, just as contrast, would be dried and then what would happen to it?

BW: It would be rolled, crushed and then it would be oxidized. That means, before you apply heat at the end, you let all the chemicals that you have released from the leaf (by rolling the leaf) interact with the atmosphere. The whole chemistry of the leaf changes through the process of oxidation. That’s why it becomes black.

White tea goes through zero oxidation, so it's gentle withering, gentle heat, maybe shaping the leaf and you're done.

LRK: Am I right in remembering that I've seen the term "wild tea" attached to it?

BW: You are absolutely right.

BW: I actually brought in a white tea today. It's the newest, hippest thing on the specialty tea market. It's made from wild tea trees from the Yunnan province of China, so it's not in that same geographic region. I'm a believer that white tea is defined by process, not by geography. It's literally made from wild tea trees up on the mountainsides of western Yunnan province 2,000 miles away from where white tea began. It's just an amazing tea.

BW: The name of the tea is Ya Bao; it’s two Chinese words that translate as "treasure bud" or "silver bud."

LRK: You poured some hot water into these small tasting cups. These are what tasters use. But the tea leaf doesn't look like any tea I've seen.

BW: It doesn't look like tea. The first time I saw this, I didn't think it was tea. I thought it was from another plant entirely. I'd never seen it before.

LRK: It's a silvery beige, with almost a tint of green to it. What it looks like is the top bud of several small leaves that have dried and clustered together.

BW: This is a tea that's only made once a year in either very, very late winter or very, very early spring.

Again it's from tea trees that go 30-40 feet up in the air. At the end of the winter, at the end of the dormant season, they’ll start putting out some new shoots and some new branches. The very first thing that pops out from an existing branch is this little bud. They pluck these buds right off of the tea tree itself and they process it just as they would process white tea leaves traditionally. They make a white tea out of it.

It's ready to be tested. It's not going to taste like a typical white tea. It's still a light tea for sure.

LRK: It's almost clear. That's amazing: This tastes like a fruit. It's something like a mango or a fresh lychee nut that has been passed over very hot liquid. It's a whisper of it. It's the gentlest thing I think I've ever had that's called tea.

This is very special. Is it very pricey?

BW: Compared to most white teas, not at all. This white tea, Ya Bao, is pretty much everyday-priced tea. Most white teas tend to get really, really pricey, but this one is not. [Ed. note: TeaSource sells 4 ounces of Ya Bao for $8.97.]