Col. Chris Hadfield: An astronaut's guide to eating in space 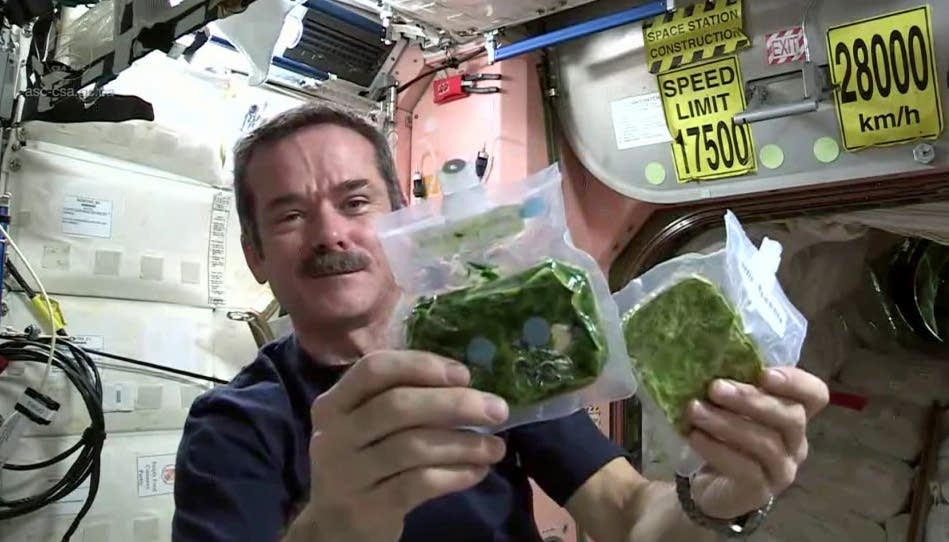 You may know Col. Chris Hadfield best for his zero-gravity rendition of David Bowie's "Space Oddity" that went viral last year, but he has a few other accomplishments. Hadfield has flown three space missions, spent a total of 6 months in space, conducted two space walks and most recently served as commander of the International Space Station.

The author of An Astronaut's Guide to Life explains why plating food is a "gravity thing."

Noelle Carter: Along with everything else you've done -- you've gained worldwide acclaim for your photography, educational videos and amazing social media posts from the space station -- you've really shown the awesomeness of the everyday in space.

In one of your videos you open a can of nuts. The nuts are vibrating as if they're alive.

Chris Hadfield: That was spooky when we opened that can of nuts. Just because of weightlessness, it suddenly looked like it was infested with small, living insects. It was such a shock to look in that I thought, "If this surprises me and surprises Tom, I bet you it will surprise everybody." So we made a video.

All eating is like that. You can't have a bag of chips because the crumbs would go everywhere and you'd breathe them. You have to make different food choices. There's no refrigeration and there are no microwaves, so it's a different menu.

But eating in space is healthy. Our dietitians work really hard. I actually showed up back on Earth a little bit more fit, a little bit less fat, and at exactly the same weight, so it's not a bad health spot.

CH: Yes, it is. Or maybe an extended sailing trip or something where you just don't have the spare electricity and hardware to do a normal meal.

The difference being you can't set anything on a plate. My wife is a chef and she constantly talks about plating things. That's a gravity thing. We end up eating like college students out of bags. You can't mix your potatoes, your gravy and your roast beef because they're all in separate containers and there's no convenient, weightless way to put them all in one spot. [Ed. note: Watch Hadfield prepare a "sandwich" in space.]

The food delivery trucks are 'complex, esoteric and really infrequent'

NC: How is food chosen for space? What kind of criteria do they look for?

CH: A lot is driven by just how it gets there. Our delivery trucks are complex, esoteric and really infrequent.

For example, if we chose to have some nice French food, it has to meet really stringent controls because we don't want to get food poisoning. Then they package it a certain way.

Then it gets launched to us. It could be months later. Then you get it on board, and we have to store it for who knows how long. It might be a year before that particular crew gets on board.

'We have like a little Easy Bake Oven up there'

NC: When you finally decide to eat the food, you rehydrate it. Is there any way to heat it up?

CH: We have like a little Easy Bake Oven up there. It just amused me when I first saw it. It's so much like an Easy Bake Oven where it's just heated by a little heater element. You take your can or your little pouch of food, and you put it in there and close the door on it. It warms it up to just slightly too-hot to eat so that it'll cool in just a second. Then you can eat it. That works for cans and pouches of prepared stuff.

Then for the dehydrated stuff, we have what looks like the little needle that you fill up a basketball with. We have one of those sticking out of the wall. You take your container of freeze-dried, dehydrated shrimp, you slide the little septum over the top of that needle, you turn to the right number of ounces of water and you push hot or cold depending on whether you want hot shrimp or cold shrimp.

But of course it's got horseradish sauce, the red sauce. It says on the package in Russian and in English how to make your shrimp krevetki.

You shake it up, you let it sit for a while, and then you have to carefully cut it open with scissors because it's in a sealed package. You want to open it so you don't spurt horseradish or cocktail sauce all over the inside of the spaceship, because nothing falls to the floor.

Then one by one you grab the shrimp and eat them. You think back to the shrimp fisherman, somewhere, who pulled those out of the sea probably never suspecting that shrimp was going to end up going 5 miles a second to be eaten a few years later on board the International Space Station.

'It's as if you have a head cold forever'

NC: How are your senses are affected in space? What is it about spicy foods? Is it possible to season what you eat in space?

CH: When you're without gravity, when you're weightless onboard the space station, there's no way for your sinuses to mechanically drain like they do on Earth. It's as if you perpetually stood on your head. So your sinuses just sort of clog up.

It's as if you have a head cold forever. Everybody knows when you get a bad head cold, you just can't taste your food because your sinuses don't reflect the smells of it. Your tongue is a little bit swollen. It masks the subtle tastes of food.

So you do like the spicy stuff. We have the Louisiana hot sauce, Tabasco sauce and I really like the horseradish on the shrimp cocktail.

But to try and actually mix stuff together or add condiments is ... I mean, even pepper: Pepper is a powder that you rely on gravity to drop onto your plate. That won't work, so we take olive oil and put pepper in it to suspend it. When you want pepper, you squirt it directly onto what you're going to eat. We do it the same with salt. We use salt water, and you squirt your salt water on your food. That's about as complicated as we can get in our little cuisine kitchen onboard.

How do you sprinkle salt and pepper without gravity? We squirt salt water and pepper oil. pic.twitter.com/jts7PyJ8Bn

NC: The sun rises and sets so many times in a 24-hour period while you're on the space station. It seems like you have to manufacture a day. Do you eat regular meals like we would on Earth? Is everyone on the same daily schedule?

CH: Typically, we all live on the same daily schedule. As you said, you have to manufacture it. We just have to decide when morning is because we go around the world 16 times a day.

We get up and breakfast is on your own. It's whatever you particularly like because everyone is taking turns in the toilet. It's like living in a dormitory. Lunch is on the fly as well because everyone's period for experiments maybe doesn't overlap properly.

But for dinnertime we try and definitely get together. I was the commander of the ship and I really wanted people for the social and the psychological benefit of it to get together at dinnertime.

Typically whoever has done their work for the day a little bit early will sing out about an hour before, "Hey, is this okay for dinner? What do you want? Is this okay?" They'll start putting stuff in the little heating element device. It looks like a small, silver, Samsonite suitcase that you squeeze your food into. Then they'll rehydrate some food and they'll lay it out on the table.

Then we'll get together with as many of us as we can, including the Russians who mostly work down in the other end of the station. We all want to share the experiences of the day, laugh and talk about what went on. Eating time, just like it is around a family table or for a group of friends at a restaurant, is really important on the space station also.

'You miss the smell of food'

NC: With everyone from different nationalities, do you all eat the same food or does everybody bring different foods from their countries? How does that work?

CH: Luckily everybody brings different foods from their countries. You get to order months -- years in fact -- in advance from this big list.

We do food tastings. Instead of going and feeding myself in Russia, we would sit down with their dietitians and their cooks. They would give us a little morsel of 40 or 50 different types of food that day. You'd try it and you'd rate it one to 10. Then at the end of it you would say to them, "Hey, I want everything that is an eight and above."

Then the same thing with the NASA-provided food. Then the other partners, the Japanese, the Europeans and the Canadians, maybe get a few of the top items from Japan, Canada or from Europe.

Then we get to do what are called bonus packs. Typically people would get just a nice variety so that when we're having a dinner, someone can bring out some duck confit or some specialty food from somewhere, some canned Camembert cheese, some Russian borscht or something that is really ethnic and great and share it with everybody else. [Ed. note: Watch Hadfield's floating Canadian food.] It's nice to have the food that gives you comfort, but it's really nice also to have the delight of something new on a regular basis.

NC: It sounds like you guys really have a lot of variety that's not just about food for fuel, but food for pleasure. That said, with all the prepared stuff that you're eating, is there any food that you miss in space?

CH: What you really miss is fresh food. You miss the smell of food because nothing smells while it's cooking. Something just dripping with new flavor -- a fresh salad, a good pizza or a hamburger -- that type of food is impossible. That's what you end up missing.

It's cliche, but this is my 1st meal back on Earth. The smell is like an old friend. pic.twitter.com/LR02LEM8Qp

'Astronauts take care of themselves'

NC: Are you placed on a specific diet? With all the concerns about muscle and bone loss over an extended time in space, do they micromanage everything that goes into your bodies?

CH: We had a team of experts on everything including our health. We have dietitians and chefs who work really hard to make sure that we're not getting too much salt, that we're getting a balanced amount of protein.

We weigh ourselves on this spring device on a regular basis so that they can have a look at us. We do blood samples, urine samples. They really are interested in our long-term health. We want to keep our skeleton dense. So yes, there's a lot of help and oversight to make sure that we're provided with a good diet onboard.

But astronauts take care of themselves also. We didn't get to the position by having let our bodies run rampant, so people are pretty good about self-policing. Most people come back pretty close to the target weight

Most people I think would come back and say the space station food is great.