How to carve ducks and geese

Email thisShare on FacebookShare on TwitterPin it!Share on Tumblr
Sponsor us
Photo: (c) 2013 by Holly A. Heyser

Carving a duck is pretty much the same as carving a chicken or turkey. There are lots of ways to go about it, but this is what I do.

With the bird breast up, take off the legs and wings the same way you would when breaking down a whole duck, slicing the skin between the breast and leg into the open area beneath. Use the point of the knife to locate the ball-and-socket joint that holds the leg to the body. Pop the joint by moving the leg downward. Slip the knife around the joint from the tail end of the bird. Once the leg is free from its socket, use the point of the knife to free it from the body, making sure to cut out the "oyster," the oval knob of meat in front of the ball joint. Do this for both legs.

To remove the wings (usually just the drumette), turn the duck over to reveal the curved saber bone along its back; this is the equivalent of its shoulder blade. Slice along this bone toward the neck of the duck, feeling with the point of your knife for the joint that attaches the wing to the body. Use the point of your knife to separate the wing from the joint, taking care to cut out as little of the breast meat as possible. Do this for both wings.

For the breast, take the whole breast off first and then slice it. Start by cutting each half free. Begin at the keel bone, which separates the breast halves, and slice down along the keel bone, tapping the point of your knife against the breastbone. Start in the middle of the breast and work toward the tail end, then work the other way, toward the wishbone. When you get to the wishbone, use the knife point to cut around it and then down to where the wing was. Free the breast from the carcass with short strokes of the knife. Once it's free, peel off the tender. Eat it, as it is the cook's treat. Slice the rest of the breast on the diagonal, to get the best ratio of skin to meat. Once you're finished, don't forget to save the carcass for stock! 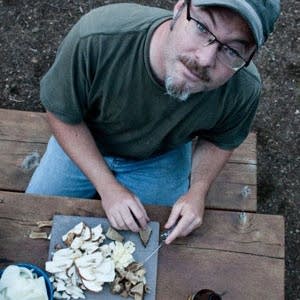 Hank Shaw is a former chef who is now a full-time forager and writer. His work has been published in Food & Wine, Organic Gardening, The Art of Eating, Field and Stream, Gastronomica, Meatpaper, Edible Sacramento, the Stockton (CA) Record, Pheasants Forever magazine and Delta Waterfowl Magazine. He is the author of Hunt, Gather, Cook: Finding the Forgotten Feast.