You can toast to this: Sparkling wines from around the world for less than $20

by Joshua Wesson
Listen: You can toast to this: Sparkling wines from around the world for less than $20
07:37

According to wine expert Joshua Wesson, we're living in what may be the golden era for fizz -- good sparkling wine doesn't have to cost a lot of money. But where to find it? Try looking to places that are a little bit off the sparkling-wine map.

I've been drinking a lot of wine from lots of different places this holiday season. I always go to Spain for cava, France for crémant and Italy for prosecco. There's so much great sparkling wine in the world now that doesn't cost a lot of money. This may be the golden era for bubbleheads. It's a great time to drink fizz.

France is a good place to start because everybody knows about French Champagne, but there's a lot of sparkling wine made in France that doesn't come from Champagne but is insanely delicious.

Probably my favorite for big parties is a wine from the Loire called Charles de Fère. It's a brut sparkling wine that goes for about $10 or $11. It's not terribly complex, but it is incredibly delicious and fun to drink. Because it's $11 you just drink all you want and look around for more. It's a great, great sparkling wine.

If you want to kick it up a notch, crémant, which is a sparkling wine made in the style of Champagne but not from Champagne, can be almost Champagne-like in quality. My favorite is made by Lucien Albrecht. It's a Crémant d'Alsace, it's from Alsace, and he makes two: one in a brut form and one in a rosé, which is really a stunt double for pink Champagne. I just think it's great. It's about $19.

I picked out two: one on the low side and one on the high side of the price range that you find for prosecco, which is $10-20. Mionetto, a very well-known producer, makes a wonderful, consistent and beautifully-packaged brut for about $12. But if you want to take it up to a higher level of prosecco-yummy, then Nino Franco makes a rustico prosecco. Both are made from the same grape, glera, but the Franco has finer bubbles, it's aged for a little bit longer, it's a little bit more of a handmade product. It costs about $18 -- it's a great bottle of wine and worth the step up in price.

Years ago it was very hard to find sparkling German wine of any quality in the U.S. You never really saw any Austrian sparkling wines, they were kept to Austrians to enjoy. But now, since we live in this golden era of fizz, you can find fantastic German sparkling wine called sekt.

One of my favorites is made from riesling and it has a kiss of sweetness. It's made by Loosen Brothers and it's called Dr. L Riesling. It sells for all of $12. It's a party in a bottle. It's so delicious to drink, it goes with everything and yet it needs nothing to make it taste delicious.

If you want to draw sparkling wine from that part of the world, just dip down into Austria and get any sparkling grüner veltliner you can find. They're never more than $20 -- they're usually between $15 and $20. My favorite of the moment is made by Weingut Ewald Gruber and it sells for about $17. It's 100 percent grüner veltliner, which is such a giggle to have as a sparkling wine since most people only know it as a still wine. It's just absolutely delicious.

I just got back from Australia, I was there for pretty much a whole month. I was completely stunned by the deliciousness of the sparkling wines that I tried there. Two really struck me as being delicious and affordable. One by Jacob's Creek is a blend of chardonnay and pinot noir. I don't know how they do it, but it sells for about $10-11 here in the states. It's bananas that they can put that much deliciousness in a bottle at that price. The bottle looks very sexy too, so if you give it as a gift, nobody would suspect that you're cheaping out on the present.

Greg Norman Estates has a line of wines and has introduced, fairly recently, a brut non-vintage for $17. It's a fantastic bottle of wine that has a beautiful presentation and is really, really delicious. Looking to places that are a little bit off the sparkling-wine map is a great idea and a great strategy for finding deliciousness.

I'm going to give you three sparkling wines. One is from California, which is so obvious and yet not. It's incredibly inexpensive. It's made by a big producer, Korbel, but their blanc de noirs in a blind tasting that I just went to came out as one of the top blanc de noirs, besting wines that cost two, sometimes three times as much. It's $10-11. You can find it everywhere, and it's just great.

On the higher end, still under $20 but barely at $19, Scharffenberger Cellars. Their brut excellence is just remarkable. It is méthode champenoise. It's aged for a few years. It's a very, very sexy bottle of wine for under $20.

If you go up to Washington State, Domaine Ste. Michelle, another solid producer, makes a brut from chardonnay and pinot noir for $12. It is incredibly reliable, great for weddings and great for big parties. You can't miss it.

But my go-to wine -- when I want to serve a really interesting sparkling wine from the U.S. that is not from California and not from Washington State -- I go to Albuquerque, N.M., and grab a bottle of Gruet brut or blanc de noirs. For $18 you can just fool anybody into thinking that they're drinking something much more expensive. 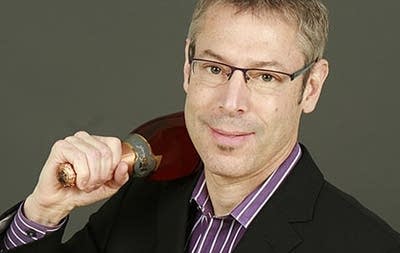 Once a hugely respected sommelier who reveled in the extravagance of princely pours, Josh now sips from the cups of carpenters in his quest for deliciousness.