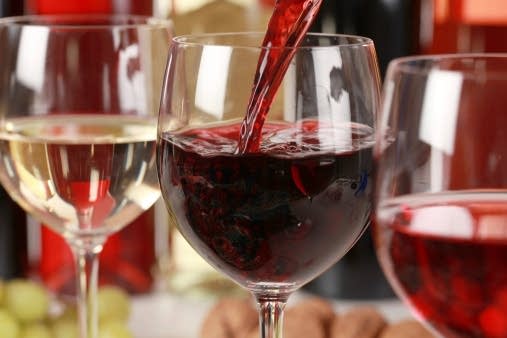 This Thanksgiving, are you hosting 20 or 30 people who love to drink? Finding a good wine under $10 a bottle is possible, thanks to technology that has gotten rid of truly awful, inexpensive wines. Ray Isle, executive wine editor of Food & Wine, explains.

Lynne Rossetto Kasper: There's a riot of flavors on the Thanksgiving table. What do we need to know to choose the right wines that are going to go with those flavors?

Ray Isle: The turkey is really the simple one. Everything goes with turkey because turkey often doesn't have a whole lot of flavor. It's the easy guy on the table. The tough one is when you're going from Brussels sprouts to mashed potatoes to sweet potatoes to green beans to cranberry sauce, which is high in acid.

My rule of thumb is pretty straightforward. Assuming you have a big crowd coming, you're going to have people who automatically want white wine no matter what they're eating. You're going to have some people who automatically want red wine no matter what they're eating. So you might as well put out two wines, no matter what, so you can at least make everybody happy. Then the key thing is finding wines that really are that all-purpose, go-with-everything wine. To me those are red wines that have a lot of flavor but don't have a huge amount of tannins, so they're not too astringent; they don't have massively high acidity. Also they aren't too alcoholic because you don't want to just get blown away at the table by noon.

RI: You lost cabernet. You lost big zinfandels. What I love for this is pinot noir, Beaujolais, dolcetto from Italy, cabernet franc from Loire. These are sort of mid-weight and lighter in alcohol but still with bright flavors and some acidity. Because really, when you have a big meal like that, you're going to have a lot of fat floating around. Gravy, if nothing else. I don't know if you're like me, but basically gravy goes on everything.

LRK: I've always felt that was a very wise idea.

RI: Yes, it's one of the best parts of the meal. Those kinds of red wines really refresh your palate rather than weigh it down. Additionally, especially with things like Beaujolais, you can get terrific wines for $15 a bottle or so. If you happen to be feeding 20 people, it's not a bad idea.

White wines, what I tend to look for is unoaked wines that are not too heavy with a lot of bright acidity. My go-to at the moment is dry riesling. People tend to think of riesling as sweet, but a lot of places such as Australia make gorgeous rieslings that are just dry, crisp and not sweet at all. You can get some spectacular wines for $15-20 a bottle that go with an extraordinary range of foods.

LRK: What if you want to go lower? I'm just thinking if you do have 20 or 30 people at the table and they like to drink. How low can you go and get a decent bottle?

RI: You can go under $10. One of the things to always keep in mind is that if you buy wines by the case -- not necessarily from grocery stores -- but if you go to a wine store, typically if you buy a case of wine, 12 bottles, there's usually a 10 to 15 percent discount right there, which is a handy thing to know. You look at the holiday season, you're apt to be going through 12 bottles. The nice thing about wine is that if you don't go through all of it, the wine is still good. It's not like it suddenly goes bad overnight. It's not like buying too much butter or too many turkeys.

LRK: It'll be there in January.

RI: One of the wines we just wrote up in our Thanksgiving issue is a 2010 Maialina chianti, which is $11 a bottle. Let's say you buy a case, then you're down to $9.50 a bottle. It's a very basic chianti, so it's very light and crisp with beautiful cherry fruit. It's a spectacular wine that will go with almost anything.

Indaba chenin blanc 2012 from South Africa is a great wine. It's crisp, has a fair amount of flavor, a fair amount of body. It's not really oaky, so it doesn't have that oak intrusion that's going to get in the way of food. It's $12 a bottle -- that's the most expensive you'll see it for. It's often on sale for $9.99; then if you buy a case, it's $8.50 or something.

In a weird way, we're living in the golden age for wine. If you look at affordable wine, there's more really good, affordable wine than there has ever been in the history of making wine. Technology has gotten rid of a lot of truly awful, inexpensive wines. You'll get a lot of generic, inexpensive, bland stuff, but you don't get stuff that's just ...

LRK: Considering the economy, it's wonderful to have good news.