How to make Thanksgiving a vegetarian's paradise

by Sally Swift
Listen: How to make Thanksgiving a vegetarian's paradise
07:54 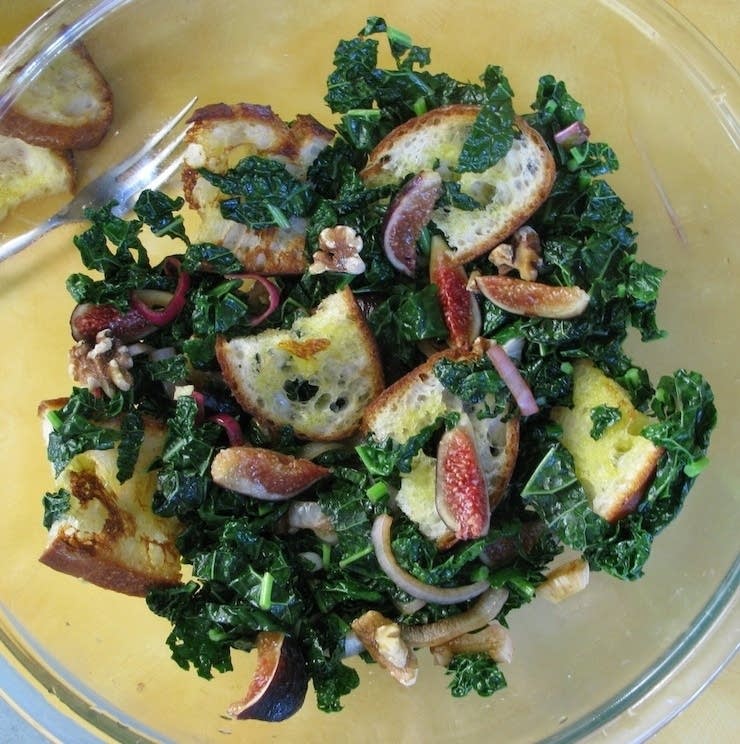 Mollie Katzen is one of the best-selling cookbook authors of all-time -- she has 6 million volumes in print to prove it. What does she write about? Vegetarian cooking.

Starting 40 years ago, Katzen raised the consciousness of an entire generation. That's when she helped found The Moosewood Collective in New York. At a time when yogurt and tofu were wildly exotic, their first book, The Moosewood Cookbook, opened minds and turned on palates. The author of The Heart of the Plate: Vegetarian Recipes for a New Generation left Moosewood many years ago, but never left her love of vegetarian cooking.

Sally Swift: You were literally at the forefront of vegetarian cuisine 40 years ago when you wrote that first cookbook based on the restaurant, The Moosewood Cookbook.

Mollie Katzen: Little did I know at the time. I was just cooking and trying to find a way to eat my food.

SS: Off it goes almost 40 years later. How has vegetarian food changed in those years?

MK: I think one of the things we were trying to do early on, at least I know I was, was just find a substitute for that hunk of meat in the center of the plate. It was very focused on something that could convince people that it was enough, a substantial enough hunk of something, to replace the hunk of meat. Very often that took the form of a casserole or something bound up with cheese, custard, eggs or all of the above. It was largely about that main course. It wasn't, strangely enough, necessarily about vegetables. It was about finding something substantial enough to hold down the plate.

SS: Which is a totally different take now.

MK: Now it's about finding a beautiful framework for the vegetables themselves. The vegetables really were still relegated to the side as they would be on a meat plate, except that the meat was replaced by the vegetarian casserole.

SS: Do you think vegetables are harder to cook than meat?

MK: Gosh no, I don't. I think that there are some people who fear that they are. I can understand that because the idea of cooking meat for a lot of people is very straightforward and it's very quick. But with vegetables there's always the issue of the knife. There's also the issue of procuring the vegetables.

SS: What do you mean the issue of the knife?

MK: Well in many cases, vegetables need to be chopped, trimmed, peeled, something -- they're not necessarily ready to go into the pan. I think that a lot of people have a bit of insecurity around the use of a knife. I call it the knife block. If people can get over that and bond with a good knife, everything changes.

SS: I had never thought about that with vegetables. Thanksgiving is the meal that I think many vegetarians feel left out of. Have you felt left out as a vegetarian?

MK: No, but I've never been a strict vegetarian. I'll always take a bite of this or that. My personal vegetarianism is mostly about the fact that I put so much plant food on my own plate that there's no room for anything else.

I think there's a lot of angst and mythology around "oh poor vegetarians, what will they do for Thanksgiving?" Because in fact I see Thanksgiving as a vegetarian's paradise just doing nothing special, just the usual vegetarian dishes. The classic mashed potatoes, then the mashed sweet potatoes, then the cranberries, maybe the Brussels sprouts, the green bean almondine, then the dressing if it's not cooked inside the turkey and it's okay for a vegetarian. Then the key point, which is the gravy.

SS: You have take on gravy for us.

MK: I do. I think the thing that people really love about the Thanksgiving meal really is the gravy more than even the turkey. I think it's the gravy.

SS: How do we go about making a gravy?

MK: I have a recipe in my newest book. It's a mushroom gravy -- I call it Mushroom Gravy for Everyone because in fact it is not only vegetarian, but it's vegan. It's also gluten-free because for people who can't eat gluten, gravy is another issue because it's often thickened with flour.

This is a mushroom gravy that is largely mushrooms. When you cook mushrooms -- any kind of mushroom -- it's so much fun to combine different kinds of mushrooms in the pot. Mushrooms have such a high percentage of water that when you cook them in such a way that they sweat out their natural juices by salting them as they cook, you get this beautiful mushroomy liquid.

SS: Are you using fresh mushrooms here or dried?

MK: You could use both, but I use fresh mushrooms and I use olive oil. If you could ask me for two words to describe the change in my cooking in the last 40 years, it would be olive oil. That's about it. And onion, you want to infuse the oil with the onion. I use a few dried herbs, the classic Thanksgivingy herbs like sage, thyme and garlic.

Then the mushrooms go in and it's important to salt them while they're cooking. Not heavily, but just enough to pull out their juices. The juices become the gravy and then you thicken it with cornstarch instead of with flour so it can be gluten-free friendly.

SS: You're just using the juices or are you pureeing everything?

MK: I'm also adding stock. With the interplay of the stock and the cornstarch, you'll get this nice thickness, then the mushrooms clutter it up beautifully.

This gravy is so convincing. I have tested this out on skeptics. It passes, it really does. It more than passes. Psychologically speaking -- so much about this whole Thanksgiving issue for vegetarians is psychological I think -- if you have the gravy, you're good. That's a good starting point.

That with this gravy, you're very far along. However, another psychological need -- I think that might be why there's all the woe-is-me for vegetarians around Thanksgiving -- is we want some kind of visual centerpiece.

SS: We need a pinnacle dish -- that's what the Turkey is for us, right?

MK: I love that you said pinnacle dish.

SS: What would you do for vegetarians?

MK: My favorite thing to do that just hits the spot is stuff a vegetable with whatever. You made this beautiful cornbread stuffing or you made this beautiful wild rice and pomegranate stuffing and you have a baked half of an acorn squash. It's beautiful with the dark green skin that turns black and the bright orange center, that perfect little cavity that wants you to stuff it so badly. You roast that acorn squash half and fill it brimming with one of these stuffings.

SS: Anything stuffed is festive, let's be honest here.

MK: Stuffing something makes somebody feel like this dish was handcrafted just for them. You fill it with something and they feel loved. Isn't that what we want people to feel like when we serve them a plate of food?

Sally Swift is the managing producer and co-creator of The Splendid Table. Before developing the show, she worked in film, video and television, including stints at Twin Cities Public Television, Paisley Park, and Comic Relief with Billy Crystal. She also survived a stint as segment producer on The Jenny Jones Show.
Lentil Soup with Bacon and Cilantro
Longevity Noodles with Ginger Chicken and Mushrooms
Basque Cheesecake
Miso-Roasted Cauliflower  with Chickpea, Carrot  and Noodle Salad