For a Mexican twist on Thanksgiving, cook the turkey in banana leaves

by Lynne Rossetto Kasper
Listen: For a Mexican twist on Thanksgiving, cook the turkey in banana leaves
06:07 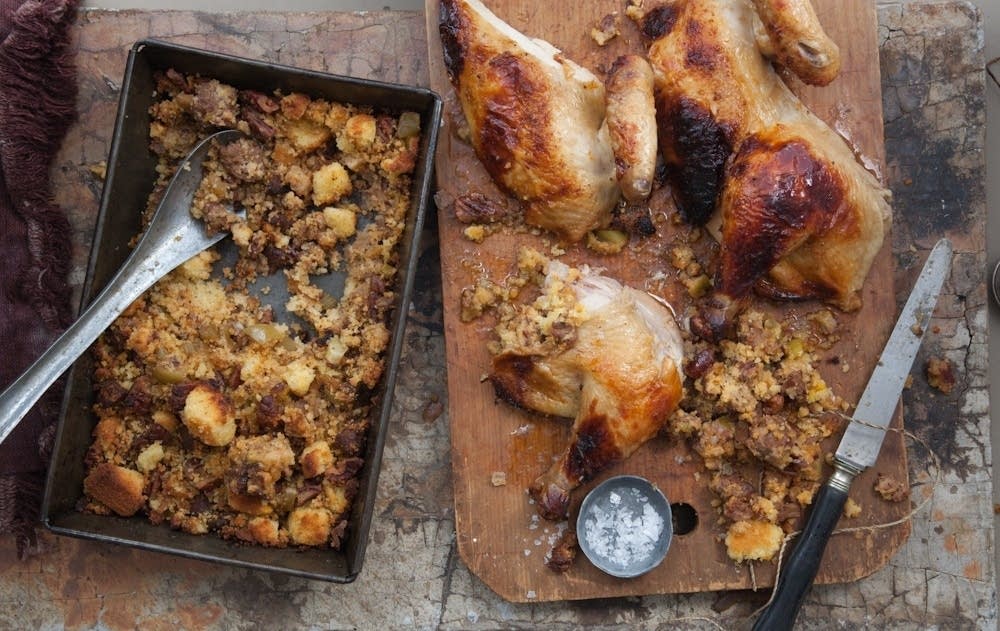 After coming to the U.S., Mexican cook and writer Pati Jinich of Pati's Mexican Table made a traditional turkey for Thanksgiving year after year. Then she decided to give the classic Thanksgiving dish a Mexican twist. Her turkey recipe includes citrus and achiote paste, and is wrapped in banana leaves and baked in aluminum foil to emulate the ancient technique of cooking food in underground pits.

Lynne Rossetto Kasper: When did you come to the U.S.?

Pati Jinich: I came to the U.S. 15 years ago. I had never heard of the word "Thanksgiving." It sounded very foreign to me, but I am very keen on embracing any holiday that can be embraced. I wanted to get into the Thanksgiving spirit. I cooked a formal, classic Thanksgiving meal for my husband for many years, until I decided to start giving some dishes Mexican twists.

I wanted to make this turkey for many years. I used to bring side dishes to my American friends' Thanksgiving tables. One year I said, "OK guys, please let me bring the turkey."

LRK: This is the thing that is so wonderful about the holiday: As people come to this country, the Thanksgiving dinner becomes a mixture of the foods that they're used to eating, from wherever they have come from. I think the most exciting thing is what happens when people like you start making a turkey the way you're used to making a turkey -- and then incorporate your background, rather than making the kind of thing we always do. Tell me about this turkey.

PJ: This is an outrageous Mexican turkey -- not only because of its rub and the marinade, but also the way it's cooked. It has spices from the Yucatán Peninsula -- the cuisine from the Yucatán Peninsula is an outlier in Mexican cooking in that it has a lot of citrus. I combine orange juice, grapefruit juice and lime juice and I mix it up with white distilled vinegar. The main ingredient in this marinade is achiote paste.

Achiote paste is made with annatto seeds, those little red pebbles that have a very charming metallic taste, a little bit like saffron, pungent and strong. It has a brick color. Whenever I say it has a metallic taste, people will make this face. But I'm like, "It's a delicious metallic taste."

LRK: This is used a lot in the Caribbean as well?

PJ: Yes. In the Caribbean and in the Yucatán it is also known as the poor man's saffron because it is incredibly cheap. It has the same sort of coloring and it has the same sort of flavoring that is hard to describe. But the achiote paste, aside from having annatto, has a lot of herbs like oregano, cumin and allspice.

LRK: How long is the turkey marinated?

PJ: You can marinate it as long as you want, but if you manage to marinate it for 48 hours, that bird is going to be really happy and luxurious. You also have charred onion and garlic, which make it really rustic.

Then you sit the marinated bird on a bed of red onion and tomatoes and you wrap it up in banana leaves. You can find them in the frozen section of Latin grocery stores or international grocery stores. What the banana leaves do to this turkey is magic. When you open it up, it's fragrant and jungle-like and very aromatic -- aside from making it incredibly moist.

LRK: Are you baking this in a deep pot or is it in a roasting pan wrapped in the leaves?

PJ: I use a large roasting pan. I put in my bed of vegetables, sit the turkey right on them and then I wrap the turkey up in the leaves. I cover it with aluminum foil because what we're trying to do is emulate the ancient cooking technique of cooking things in underground pits.

LRK: This is going to keep all the juices in. It's going to concentrate?

Then right at the end, half an hour before it's done, you remove the aluminum foil and the banana leaves. You put it in the oven for another 30 minutes. It's almost coming apart because it's so moist, but then you give it that last crisp. When it comes out, it's really something to feast on and to be joyful about.

LRK: How do you serve it?