Making food that is Japanese at its core, in America

by Rebecca Sheir
Listen: Making food that is Japanese at its core, in America
08:11 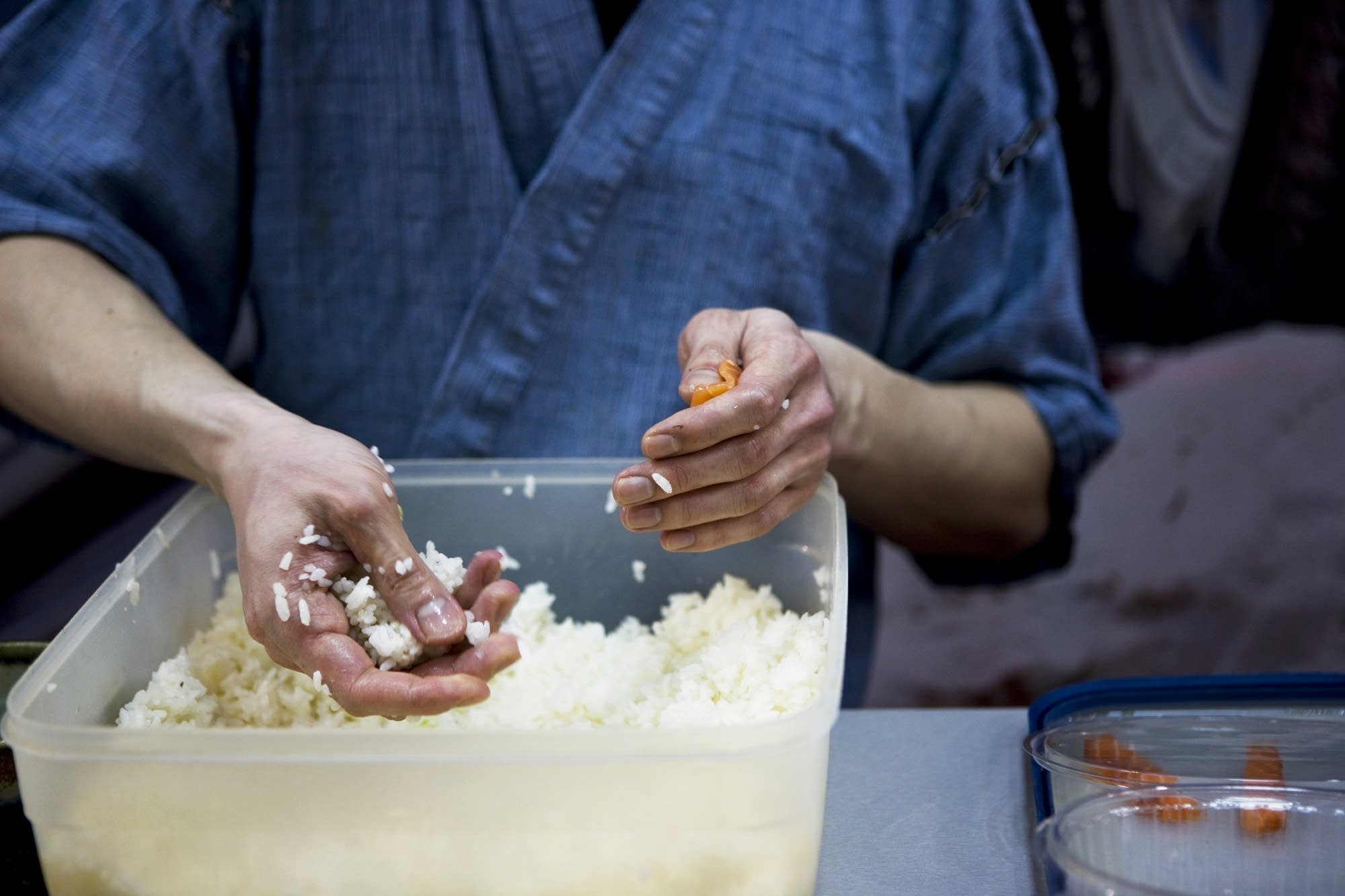 Things To Do With Rice
Gold in the kitchen: amp up your cooking with caramelized onions
Bryant Terry's Vegan Soul Kitchen brings fresh flavors to traditional soul food
Photo: iStock

Japanese restaurants were pretty much unknown in the U.S. until well after World War II. Sushi, for instance, did not make it stateside until the mid-1950s. But these days you can find Japanese cuisine in every city in the U.S.

One of the key people who has helped Japanese cuisine flourish in the U.S. is Daisuke Utagawa. Born in Tokyo, he began his apprenticeship in sushi when he was 16 years old. Now he co-owns Sushiko, located in Chevy Chase, Md.

Rebecca Sheir: How did Japanese food spread in America?

Daisuke Utagawa: I always think Japanese cuisine spread in America in stages. First, there was this tempura sukiyaki that was brought back by the military people after World War II. Then in the late '70s, early '80s, sushi started.

At the same time, the government came up with a recommendation of how Americans should eat to be healthy. They said something along the lines of, "If you eat like the Japanese, you'll be fine." That, I think, helped.

Now there are all these different kinds of Japanese restaurants opening: ramen restaurants and soba restaurants. There are even tonkatsu restaurants (tonkatsu is a breaded cutlet, Japanese-style), and izakaya (a Japanese pub). Japan has always culturally taken in outside influence and Japan-ified it. Sushi really originally was from China several thousand years ago. Japanese cuisine is very, very wide in variety.

RS: How do you translate Japanese food to the American palate?

DU: We don't. We try to bring what is essential and what I think the Japanese cuisine is. I cannot really speak for other people, but normally we don't try to change the recipe to meet the American palate or non-Japanese palate. It's not taking advantage of being in America if you only rigidly stick to the practices of Japan. Whenever two cultures meet, naturally slight changes occur. I think that itself is a beautiful thing.

The sushi bar is one of the rare occasions one can sit in front of the cooks who are going to make your food. Because of that, each time we serve something, we can see the customer's reaction. If somebody says, "This is the first time I am going to have sushi," I don't think the sushi chef will be serving sea urchin.

I was told by my teacher in Japan: "When the customer sits in front of you, it is your job to take them on a journey." I said, "Why?" He said, "Because you can." For the longest time I didn't understand it.

It's the same thing about the subtlety of the ingredients. He would say something like, "If you want to be a really good cook, you have to really understand the ingredient and listen to it. If you listen to it long enough, it will tell you what to do." It took me a very long time to understand it, but that is the philosophy that they have.

To give you a very simple example: It's Sunday in the late afternoon, the restaurant just opened, and two men sit in front of you, they are friends. One came from working all day because he had some project he had to finish; the other one went golfing, typical Japanese. You can tell this by the way they are, they might have talked about it, you might have asked them, "How was your day?"

You start them off with two little, different appetizers or tsukidashi, which are little freebies you use to whet their appetite. The guy who worked in the office, you might give him something with a little bit of vinegar because it stimulates salivary glands. He might wake up and think, "I'm ready to eat." The guy who went golfing was sweating all day, so you give him something salty. You might start them off with two separate plates, then you might try to join them at some point. Then you take them on a journey.

It comes back to the question of how do we bring it to the American palate? We don't. What we do is try to instill the philosophy of Japanese cuisine into the ingredients that are available here, into the techniques that we may not have known, and incorporate them all but still make it a Japanese food at its core.

DU: Japanese bars sometimes have the function of almost a neighborhood social club. It is not uncommon to go to what we call Japanese shot bars. Many bars usually serve what is called bottle-keep -- you buy the whole bottle and they will keep it for you for a certain amount of time. You go back there because you tell your friends, "Hey, I have a bottle kept at such and such."

RS: Throughout multiple visits, the bottle is still waiting for you?

DU: Exactly. To counter that, people started opening shot bars, which are the closest to the American bar. They serve cocktails and they charge by the glass or shot.

Some shot bars you go to, it's not uncommon to hear a customer talking to the bartender saying, "You know what? I just read such and such poem and I feel this way. I want to complement my feeling. Can you make me a cocktail?" If I would hear that, I would normally start laughing. But it's normal. The bartender will take that really seriously and will actually love that sort of interaction. He will make a cocktail to match the mood. In that sense, it's a little bit different from here.

There are also bars that have a particular theme. There are jazz bars -- you are not really allowed to talk in there. They have unbelieveable jazz collections, things you probably won't be able to find in the U.S., old records. They will be playing these. You go there and they might only have three kinds of whiskey because that is what the proprietor thinks would go well with listening to jazz. That's the experience you would get from that.