How to make buttermilk good enough to drink

by Lynne Rossetto Kasper
Listen: How to make buttermilk good enough to drink
07:32 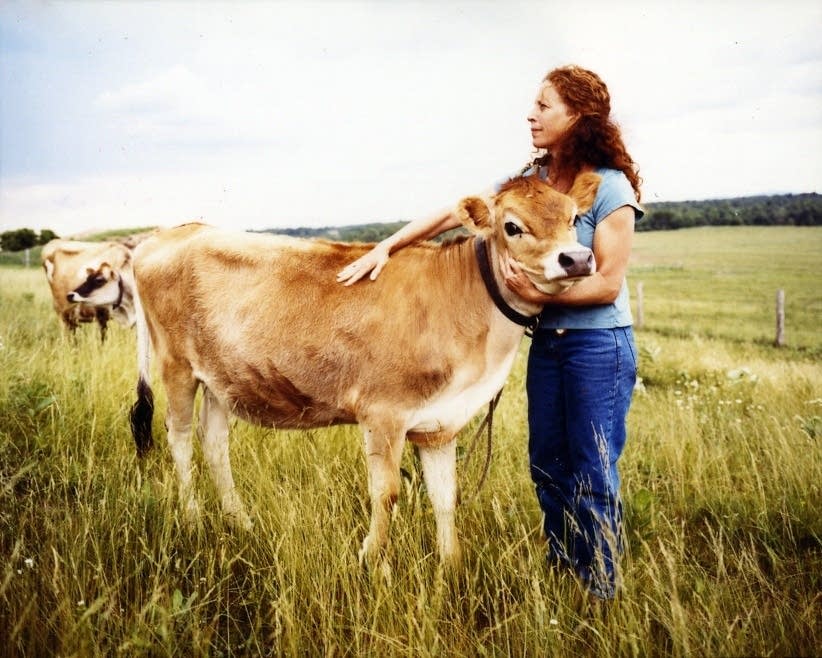 Buttermilk is what you buy for a recipe, use a cup or so of, and throw out a couple months later. It's not all that appealing to just drink. But then you hear people reminiscing about the buttermilk on the farm, the drink everyone could not get enough of. Where's that buttermilk?

Right now it's in Vermont, and it's being made by Diane St. Clair. St. Clair is famous in food circles for her butter -- it’s the only one chef Thomas Keller will use. The aftermath of that remarkable butter is going into bottles. She does all this with a herd of 10 cows on her animal farm in Orwell, Vt. She is the author of The Animal Farm Buttermilk Cookbook: Recipes and Reflections from a Small Vermont Dairy Farm.

Diane St. Clair: Really only 10 cows. But I started with two, so now I figure I'm a big farm.

LRK: I can imagine that the demand for your products is huge. Why not more than 10 cows?

DSC: I got into farming because I love cows and I wanted to be a farmer and a butter maker. I think that if I got much larger, I would have to give one of those things up. The thing that usually goes is the milking, which I do at either end of the day. I'm in my creamery during the day.

Milking is an essential part of what I do because it's the time I get to check in with the cows, see how they're feeling, see what they're up to and give them a scratch. It's what I love and I wouldn't want to do my job without it. If I get too big, I can't do that.

LRK: You said that if you get to the point where you forget their names, it's too many cows.

LRK: But as long as the cows don't know about it, it's great. How is your buttermilk different from the buttermilk that we get in the supermarket?

DSC: Most people don't realize that the buttermilk they get in the supermarket is in fact skim or low-fat milk to which a culture has been added. Real buttermilk is exactly what it sounds like: it's milk that is leftover from the butter churn. Sadly in our days of mass production of dairy foods, that has been lost.

What I'm making on my farm is coming out of my churn, so that means that it started with cream, not with low-fat milk. I make a cultured butter, so I put a cultured cream in my churn. When the churning is done, what I have left is butter and this wonderful creamy, tangy buttermilk, which is the real deal.

LRK: What does the culture do to the cream?

DSC: The culture acidifies it. It's putting a lactobacillus culture in and it's fermenting it -- for lack of a better word. That makes it easier to churn. I start with essentially a crème fraîche product, that's what's going into my churn. The buttermilk that's left over is very clabbered, creamy and has flecks of butter in it. It's absolutely amazing and I think probably approximates what happened on farms 100 years ago when everybody made butter.

LRK: You hear people reminiscing even from more recent times about fabulous buttermilk they couldn't wait to drink.

LRK: We really rarely feel that way about the stuff we get in the supermarket.

DSC: I was talking to somebody when I was on my book tour in Charleston, S.C. She was lamenting how you used to see buttermilk all over the South and it's gone. I think it's because pre-refrigeration, people kept milk around and it clabbered, it fermented. This is very common in warm cultures -- they have some kind of clabbered milk and that was delicious to drink. But then when it became commercialized and you were just working with skim milk, a lot of the taste was lost and people didn't like drinking it as much.

LRK: What do you do with this wonderful milk?

DSC: I wrote the book because I decided that buttermilk isn't just for breakfast anymore. Everybody knows it's fabulous in waffles and pancakes and it makes things rise miraculously. But in fact you can do lots of things with it.

People are intimidated to cook with buttermilk, and one reason for that is it can do what we call the break. If you heat it too harshly, if you take it to a boiling point, if you're not slow and steady with it, it can break. But that break will often come back and you can then put that back into your sauce and it will melt back down.

In my book I talk about how not to be intimidated by this, to cook slow and easy, not to add any extra acid. Another secret thing is to put some flour in it. For instance, you can make a fabulous béchamel sauce with buttermilk. It won't break because you've got that flour in there.

LRK: That would have such a delicious tang to it.

DSC: Yes. You know how sometimes cream or milk can make it a little gluey and flat? The buttermilk gives it this wonderful acidity and lightness. It's great in lasagne. I use it as a white sauce on pizza. It really adds another dimension of flavor.

LRK: Can we make buttermilk ourselves?

DSC: Yes, I encourage people to do this. What's important is to try to source an excellent cream. The fresher and better the cream, the better your buttermilk will be. If you can find a buttermilk that has a live culture, that's what you need. You're going to take that cream and heat it very gently to about 70 degrees Fahrenheit using a thermometer, then take it off. What I like to do is put it in a Yogotherm.

DSC: It's a wonderful little device that will hold about a quart of fluid milk, but it's surrounded by Styrofoam so that it will keep that temperature stable. If you have 4 cups of cream and 1 cup of buttermilk with a live culture, just keep it at that temperature overnight. Stick the Yogotherm top back on it, and then in the morning you’ll have this nice, thick product. It will be like a crème fraîche or a thick yogurt consistency.

Put it in a food processor and in 3 or 4 minutes you're going to have butter and buttermilk. You're then going to run that through a sieve. Save your buttermilk like the precious gold that it is. Then you're going to take that butter and put it on some kind of cool slab and wash it so that you get all of the milky substance out of it -- fold it over, wash it. That's going to keep for a couple of weeks in the refrigerator and will be delicious butter.

LRK: Now we know what Thomas Keller has been getting. We just need your cows, that's all.

DSC: That's the thing: You should find some nice Jersey cream, that's what you want to do.